Australian Directors’ Guild Awards 2020: More than half the winners are women

Announced in a virtual ceremony, the director's awards celebrated achievements of diverse newcomers and established talent in a year of much change.
ScreenHub 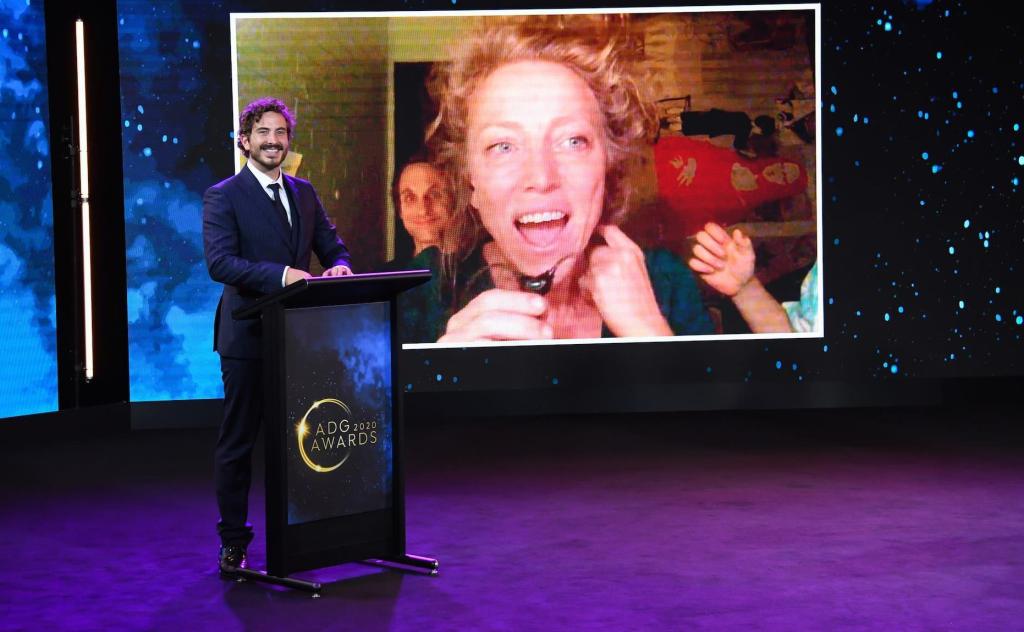 Image: Ryan Corr presents ADG Award to Josephine Mackerras (who appears on the virtual platform) for Best Direction of a Feature Film (Budget under $1M) for Alice. Supplied.

The Australian Directors’ Guild announced the winners of the 2020 ADG Awards via a virtual ceremony hosted last night (Monday 19 October) from Sydney. You can watch it here.

A record 202 entries were received in this year’s ADG Awards, up from 117 in 2019. The Awards celebrate the outstanding work of Australian screen directors over the past year across 19 categories including film, television, online, music and advertising. The full list of nominees is over here.

Ben Lawrence won the Best Direction of a Feature Film (Budget $1M or over) Award for his feature film Hearts & Bones. Starring Hugo Weaving and Andrew Luri, the film was released in the US last week following its successful Australian release earlier this year, and is now available on Stan.

Ten of the 19 Awards were won by women, a reflection of the industry’s move towards gender parity, which has been a real challenge in the Director category, both here and internationally.

Among the many female directors to be awarded was Josephine Mackerras, who comes from a theatre and short film background. She won Best Direction of a Feature Film with a budget under $1M, for Alice, a story of a middle-class single mother’s journey into sex work after discovering her sex addict husband has frittered away their savings. Filmed in Paris, and in the French language (Mackerras moved there as an adult), this feature debut doesn’t look look or sound like an Australian film though it was apparently filmed in Mackerras’s own apartment, with her young son in a role, and follows a familiar low budget guerilla methodology. Alice showed at MIFF in 2019 and has been making its mark in small film festivals around the world for a while, with awards including the 2019 SXSW’s Grand Jury Award and Cherrypicks Female First Feature Award.

Matthew Thorne was the winner of the award for Best Director of a Music Video for ‘The Only Boy Racer Left on the Island (for the artist The Howl & The Hum), and it’s evocative and moving, like a condensed Australian coming-of-age film set in a small town.

The Howl & The Hum – The Only Boy Racer Left On The Island from Matthew Thorne on Vimeo.

In the prestige TV categories, the much-awarded and very busy Jeffrey Walker received the Award for Best Direction of a TV or SVOD Drama Series for Stan’s eerily prescient The Commons Season 1, Episode 1;  while veteran Matthew Saville won Best Direction of a TV or SVOD Comedy Series for Upright – Episode 5, starring Tim Minchin and a very bashed piano, in a series that is far more drama than comedy but no less excellent for that.

ADG President Samantha Lang said: ‘The Awards come at a moment when key creatives and organisations in our screen industry are lobbying government to “Make It Australian” and keep Australian storytelling on our local and global screens. The films, television shows, music videos, student films and commercial work of directors nominated and awarded tonight are a shining example of the creative, cultural and fiscal success of Australian content. It’s also heartwarming to see an immense diversity of Australian directors awarded tonight – a reflection of who we are – both as content creators – and audiences.’

Read: Be bold, be real, be rigorous. Samantha Lang on creativity and change in this weird moment

Any Australian Directors’ Guild member is able to submit for the ADG Awards. The judging panels are drawn from ADG membership (Full Members).

The complete list of 2020 ADG Awards Winners is below.

Best Direction of a Music Video
Matthew Thorne – The Only Boy Racer Left On The Island (Artist:The Howl & The Hum)