Anna Kaplan: You have to live and breathe your message

Greening Australia's screen industry is the goal for our best-known Impact Producer, the most recent recipient of the Natalie Miller Fellowship.
Rochelle Siemienowicz 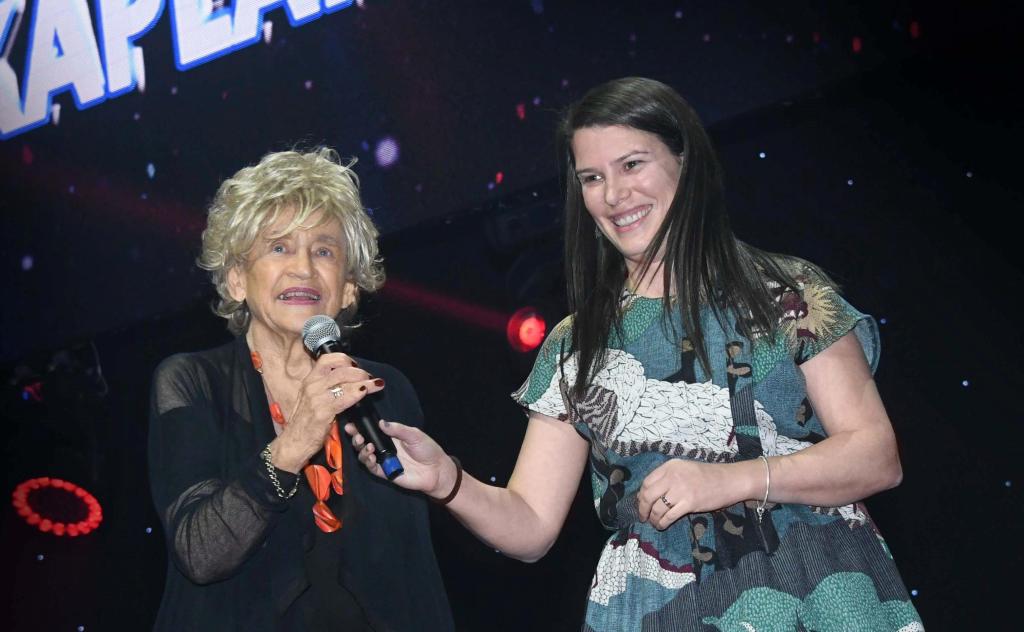 Single-use plastics and disposable masks are essential workplace tools right now, and you could argue that environmental sustainability is the last thing we can afford to worry about. And yet, for Anna Kaplan, Impact Producer and Sustainable Screens campaigner, this is an ideal time to rethink processes.

‘Obviously the industry is in survival mode and health and safety are the priorities,’ she says on the phone to Screenhub. She’s talking from semi-lockdown in her home in Melbourne, where she’s been grappling with the joys of homeschooling, as well as some very nimble pivots on a US release strategy for the environmental documentary phenomenon that is Damon Gameau’s 2040.

‘But at the same time, while we’re having to redesign everything to be COVID-worksafe (and going backwards in terms of things like single use plastics), this is a very good time for us to include sustainability as part of that change discussion.’

At the Gold Coast Movie Convention last year, Kaplan was announced as the eighth recipient of the prestigious Natalie Miller Fellowship for women in leadership in the Australian screen industry. Her proposal was about elevating environmental sustainability as a key area of concern for an industry that she sees as including not just film and television, but also advertising, digital production and games development.

The annual fellowship (currently calling for submissions) provides up to $20,000 for women to pursue professional leadership through attachments, internships, travel, and other means. Sponsored by Kojo and Village Roadshow, and headed up by a committee led by Sue Maslin AO and Sandra Sdraulig AM, along with a bevy of other female industry powerhouses, previous recipients include Rachel Okine (Aquarius Films), Harriet Pike (Wildbear Entertainment), Rebecca Hammond (Beyond), Courtney Botfield (Bunya), Saskia Close (GC Film Festival), Kristy Matheson (ACMI) and Miriam Katsambis (E-One).

For Kaplan, receiving the Fellowship brought her full circle. When the fellowship was first established in 2011, she was managing Film Victoria’s Industry and Audience Development funding programs (from 2009 to 2012) and was on the committee that took the NMF proposal to Sdraulig, who was then CEO.

2012 is not so many years ago, but back then, hardly anyone had heard of an impact producer, let alone included the role in their budget. It goes without saying that documentary producers, especially those who want to change the world, have always been champions and missionaries for their messages. But Impact Producing – a specialised area where Kaplan has become a pioneer and national leader – takes championing, networking and audience development into another stratosphere entirely. The work of organisations like Documentary Australia Foundation, and Good Pitch Australia (whose final project The Leadership just premiered at Sydney Film Festival) have been key in developing the role, and Kaplan says there are now around 15 experienced impact producers with major campaigns under their belts, and many more junior talents.

‘You’re going to have to live and breathe your message, because authenticity is absolutely essential and the hours are crazy.’

The only downsides of those organisations’ well-publicised successes, says Kaplan, is that they’ve raised expectations for many documentary producers, who, for one reason or another (timing, subject, luck) will never be able to connect with audiences the way a film like 2040 has. Released on 95 Australian cinema screens in May 2019, that film grossed over $1.5m at the local box office, and its theatrical launch was bolstered by a campaign that activated schools, local communities and affiliate groups and tapped into a burgeoning #SchoolStrike4Climate movement, with 50 cinemas offering free entry for school students across the opening weekend. Internationally it’s been released in New Zealand, the UK and Ireland, Germany, France, Italy, The Netherlands, Russia, China, Turkey, Taiwan, Sweden, Canada and the US. But environmentalism in an issue you can easily preach about. Not all docos lend themselves to this approach. There’s also the fact that Good Pitch Australia has wound down, and won’t be there to help now.

If impact producing sounds like some kind of evangelism, you’re not wrong. Don’t even think about trying to work for a project you don’t personally care about. ‘To do it properly,’ Kaplan says, ‘you’re going to have to live and breathe your message, because authenticity is absolutely essential and the hours are crazy.’

Inspired by her recent work impact producing Gameau’s documentaries, That Sugar Film (2014) and 2040 (2019), both produced by Nick Batzias, Kaplan’s fellowship proposal grew out of her own search for answers on those projects. As she says in an email:

In my producing role on 2040, I was responsible for ensuring Australia’s highest-profile environmental film had the lowest possible environmental footprint. This required us to develop a robust carbon management plan and embed sustainability and circular economy principals into all aspects of the production. In the absence of sector-specific, localised tools or recourses, designing this process and tracking our impact proved extremely challenging and required us to seek support and guidance from partners and sustainability specialists in other sectors and countries.

After the film was released, I started receiving enquires from other screen producers and practitioners who were keen to embrace more sustainable practices but didn’t know where to start. And with the climate and biodiversity emergency becoming an increasingly prevalent theme in the content our sector produces, I discovered that an increasing number of practitioners and companies are already taking positive steps that could be greatly scaled with a unified framework and a localised suite of targeted resources and tools.

Her proposal, developed pre-COVID, included travel and research, especially in the US and Canada accompanying 2040. Much of that travel has had to be cancelled of course, but the work has adapted and continued. Kaplan says the Fellowship is enabling her to ‘conduct deep research, upskill and build international networks with sustainable production specialists.’ It has also connected her with three other women working in this specialised area: Tanzy Owen, Jennifer McAuliffe and Sarah Tosone. The four of them have recently formed a working group ‘to develop and advocate for adoption of a localised framework and tools that are informed by international best practice and industry consultation and co-designed with industry stakeholders.’

‘The ultimate goal is to see our industry come together to commit to concrete, measurable steps to reduce our collective environmental impact.’

Kaplan says, ‘For me, the ultimate goal is to see our industry come together to commit to concrete, measurable steps to reduce our collective environmental impact. With a robust, inclusive strategy and a commitment from the screen agencies and peak industry organisations to address the skills and policy gaps, we can greatly scale our industry’s capacity for environmental stewardship.’

There are of course many international models that do this kind of thing. Kaplan mentions the work of We are Albert in the UK, the Green Production Guide in the US and Green Spark Group in Canada, which are all providing ideas and inspiration. But she says the Australian situation requires specific tools and models, not just because of the small scale and integration of our industry (‘we see ourselves as a screen industry without the usual silos’), but because of ‘the large amount of content that has that has some taxpayer funding in the mix, and there’s obviously a policy lever there that should be explored.’

Kaplan is keen to emphasise the Sustainable Screens working group is all about consultation, about helping an industry that already wants to do better and do more, rather than imposing any onerous top-down limits or constraints. ‘We want to help people who want to do the right thing,’ she said, ‘but also to do it in a way where it’s cohesive and united across our industry ecosystem so that we can all be part of it together, and we can all have a much bigger impact than if we were just doing it piecemeal. Because it is already happening, piecemeal. Businesses are doing stuff, individual crew members are doing things, but it’s very hard to measure it and the only way to really successfully reduce our environmental footprint is to measure track and report. And to do that, in a unified collective way.’

Building the social license for this to happen is a key part of the process. ‘We’re all about trying to make that as easy as possible and looking at the cost benefit analysis,’ says Kaplan, who says there is a misperception that it’s going to necessarily cost more and be hard work for crew. ‘But if you get the systems and processes right and you support everyone it can actually improve things and it can save money. And it can actually, in some instances make people’s jobs easier.’

Kaplan encourages practitioners across the screen industry ecosystem to join the Sustainable Screens Australia Facebook Group to connect, share information and stay up to date on developments in this space.