After the Apology – a film building on miraculous generosity

After the Apology, the feature documentary by Larissa Behrendt and Michaela Perske, is a case study in research and interview technique.
David Tiley
[This is archived content and may not display in the originally intended format.] 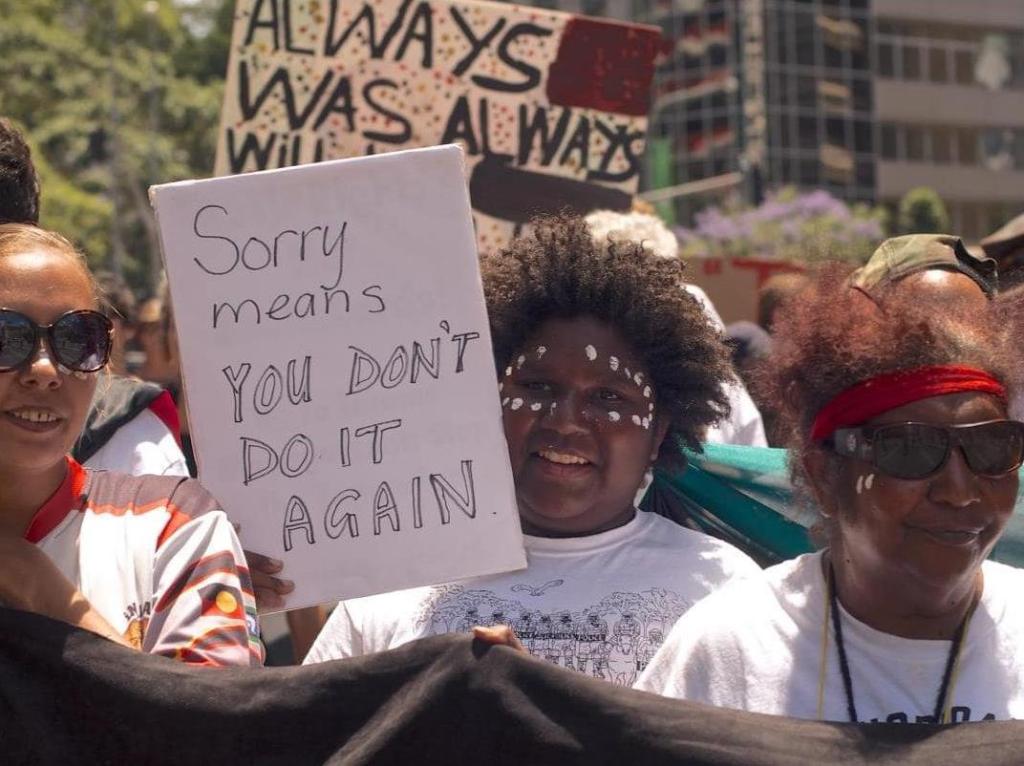 Image: from After The Apology

The best lawyers in the screen industry have laser minds, a certain combativeness, a feeling for objectivity and a sense of humour. They can make good producers, but not too many become directors. Words are not images and arguments are not feelings.

This is a story about a fighting lawyer who has made a beautiful documentary which touches hearts while it is thoroughly infused with the bureaucratic process that is a snorefest for the rest of us. Even the title, After the Apology, speaks of gesture politics and legal niceties.

After The Apology Trailer from kiki dillon on Vimeo.

The apology was made by Kevin Rudd in 2008 on behalf of the nation to the Stolen Generations. At the time, according to a title card for the film, ‘over 9,000 Indigenous children were in out of home care; by June 2016, that number had risen to over 16,000.’

Very few of them are with Aboriginal families and the importance of relatives is denied. Powerful older women with great wisdom are cut off from their young descendants.  They got together and formed Grandmothers Against Removals and went on the march. They are impressive to watch, tragic and funny and determined together.

‘I became a lawyer to change the world,’ she said, ‘but I realised that you are not going to get change by running cases and putting arguments. But hearts and minds and the power of story? I don’t see them as being separate in a way.’

She tries to bring her research back to communities, for whom academic language doesn’t cut the mustard. But her professional discipline is still vital. ‘I gained from the academic rigour in my history. It makes you think deeply about issues and how you represent them and how you answer the questions your audience will have.’

‘I am a great believer in creativity as an act of resistance but also of healing. And I think you will find a lot of Indigenous people working in very different areas will have a creative outlet.’

She has written two novels modelled on the story of her own family, and filmed her research interviews. Her passion for storytelling took her to the Australian Film Television and Radio School, where she did Graduate Diplomas in Screenwriting and then in Documentary.

‘You do get trained to think in a certain way as a lawyer. A blessing of film school was to unlearn and re-engage with imaginative storytelling and the power of that.’

Bringing the film to life

She connected with producer Michaela Perske who had already produced Footy Chicks and Boxing for Palm Island and discovered they were kindred spirits. As Perske said in an email, ‘Larissa and I have an incredibly trusting and intuitive way we work together. There is a mutual respect and admiration for the skills we both bring to projects. We always start with the basics – the who, why, what and how and talk at length about the people involved and what impact the work we are doing will have on them on a day to day basis.’

According to Behrendt, ‘It took two years to get the film together. I and my team worked on a lot of cases and I met the grannies through the work I was already deeply engaged in before I decided to make the film. Your subjects know you are invested beyond just making a film. Building up trust is certainly important in the Indigenous context where people are protective about their stories and who is telling it. There is a huge historical context.

The film is remarkable for its compelling  interviews. Perske began her career as a journalist, working in radio, print and television with a focus on human experience. ‘I have a really strong instinct when it comes to story and characters – it sounds clichéd but it is a sixth sense thing that I trust implicitly. My journalistic “this is a story” kicks in but I am always aware of the  bigger picture and also the ethical responsibilities around telling peoples’ personal stories.’

The characters open themselves up so completely, taking us into the surprise and anguish of their ghastly journey, acknowledging their weaknesses, but determined to move beyond self pity. The film gains enormously from the outside experts – Lisa Burnley, for instance, is the first Aboriginal woman elected to the NSW Parliament, spoke in her maiden speech about being the child of a Stolen Generation family, and describes her experience as a key Minister in the removals soon after the apology.

Perhaps the most remarkable journey is taken by Deb Swan who started to work for the NSW Department of Family and Community Services (FACS) while she was supporting her sick father in Moree. She was taking children from their families, felt sometimes like a traitor, but kept some faith that the department would obey its own ‘Aboriginal Placement Principle’. Then her sister Jen had her grandchildren – lets use the word – stolen, and Deb was not told, or consulted, or allowed to take the kids in, even though she was so obviously suitable and was close family. She resigned from FACS and joined the Grannies.

A matter of technique

There is a small amount of very simple reconstruction, but most of the evocative footage is done by black and white rotoscoped animation. The strategy enabled them to get round  legal issues about the depiction of children still in care, while the drained colour takes the story beyond race. The animation was done by Marieka Walsh, known mostly for two extraordinary sand animation films, supported by a strong soundscape created by Emma Bortignon and composer Caitlin Yeo.

Above all, the animations take us into the art of the film, to the emotions at the heart of the logic.

The production benefitted enormously from Perske’s choice of crew. The cinematographer, Marden Dean, is a drama expert who also shot the forest drama Fell, the magic realist Boys in the Trees, and went on to Breath which is about to open in cinemas. Editor Matthew Walker provided the space for the stories to evolve, though he too has little experience with feature documentaries. Pursekey worked with him on Destination Arnold, which won its documentary category at the Sydney Film Festival and gave Walker a commendation for his editing. He knew very little about Indigenous issues and brought a valuable objectivity to the cut.

The film was supported by Screen Australia, Adelaide Film Festival, Screen NSW, KOJO and The National Film and Sound Archive. There is no broadcaster in the mix. According to Behrendt, ‘It would have complicated it. They have a lot of aversion to the risk in telling these stories. I felt we were somehow liberated by being able to do it this way. We didn’t have to compromise our objectives and you can see the money on the screen.’

Instead, it will be released from May 14 through Cinema on Demand, while communities can organise their own screenings. They have made an arrangement with The Guardian which will play the animations and do some additional pieces around the issue, with a link to the entire film.

After the Apology premiered at the Adelaide Film Festival last year and will open the Human Rights and Environment Film Festival in Melbourne on Thursday 3 May. A day later, The Australian Directors’ Guild Awards will reveal whether it wins any of the categories it has been nominated for – Best Direction for a Feature Documentary, and Best Direction of an Animated Project with Marieka Walsh.

The power of research

Shining out of this film, from my point of view, is the adroit use of journalistic skills. Behrendt’s role as a lawyer was vital because she knew the people and their cases so well. But she is also making a case in the court of public opinion, using a structure based on the metaphor and empathy which underlies wise storytelling.

‘As a filmmaker you do have a responsibility to do your absolute best as a producer to be true to the story. It is a mistake to come into such a complex area with a simplistic or narrow view. There is the risk of falling into stereotypes or negatives or a dangerous myth and that level is crucial.

‘If you don’t do research and getting across the subject and stories, you are taking high risks when you are asking people to be so generous with their lives. These are not polished professionals doing publicity work. They are essentially private people who had something terrible happen to them and you have a responsibility not to add to their trauma.’

In these incendiary times, fuelled with the petrol of social media, ordinary citizens who stick their heads up can burn in hatred. It is a vile thing, which caught Behrendt herself in the so-called Deadwood controversy. Filmmakers need to understand their subjects deeply, to be able to defend themselves with the aplomb of professional politicians. And yet independent documentary makers keep going.

‘The thing I find miraculous about filming is how generous people can be about telling their story, not just within filming but to the world. I absolutely love the film process. The more I can start conversations and capture the voices in my Aboriginal community that need to be heard – I am pretty addicted to that.’

All you mob out there get on your social media and raise such a raucous that we can’t be silenced or ignored. Our kids are not for sale. You do not have enough money in your treasury. Our kids are priceless!