ABC: how to say pull the other leg politely on cuts

Here's a few wrinkles in the latest cuts fight, from the prospects for the indy sector to the long term budget truth.
David Tiley 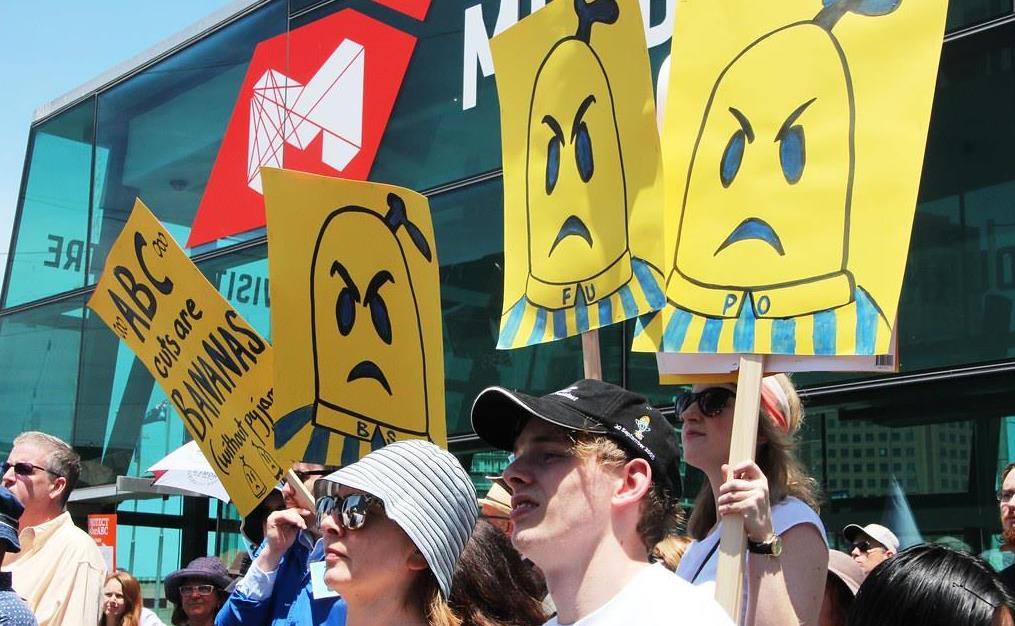 The fight goes on forever – this rally was in 2014. Image: John Englart on Flickr.

In amongst the responses from the ABC about the budget cuts are a couple of proposals which don’t make clear sense unless you understand the special mind map you learn when they employ you.

Wrinkles around the cuts

We are told that the ABC Comedy television channel will be rebranded. This does not mean that Auntie has decided not to be funny any more. Instead, the side channel currently called ABC Comedy will be loosened to include a wider range of material. This is expected to contain arts and factual.

Original content screening will be reduced from 48 to 42 weeks a year, which seems to fit the commercial broadcasters’ definition of a working year. In particular we can expect Four Corners to lose four eps a year, thus giving the government a long period over December and January away from the laser eyes of the ABC’s finest.

Increased spending on digital services such as ABC iview. That is very broad and may make producers wince, but it does indicate that the space for specialist factual, the arts and a variety of initiatives will increase. This one is absolutely to be expected since the organisation as a whole is lumbering towards broadband.

Shows will no longer be commissioned to screen after 9.30pm. At times the ABC has had a distressing tendency to push its more esoteric commissioned work to late at night, often on Sunday, on the grounds that it can be watched on catch-up anyway.

While the opportunities on the former ABC Comedy and iView are increasing, producers will beware the argument that the budgets should drop.

Last Friday, Ita Buttrose came out fighting for the organisation she chairs. Now a national icon, never far from the public eye and deeply imbued with commercial magazine publishing smarts, she turns out to be an excellent spokesperson for the ABC.

‘It’s about democracy,’ she wrote. ‘Without the ABC we would have a balkanised and parochial bunch of broadcasters that are in danger of being compromised by profit and more intent on dividing than unifying.’

And then, ‘The ABC, funded by all of us, regardless of our creed – race, age, political beliefs – is us. It’s the way we build cross-cultural understanding, the way we help each other in times of need. It’s who we are collectively. Why would anyone want to diminish that and make us less than who we are?’

The government continues to insist that the ABC is not being cut. Whoever they are in person, they have an army of professionals who know exactly how budgets work. Nonetheless, Buttrose has to explain the truth.

Alan Sutherland, a long standing senior editorial figure at the ABC, has published an excellent short piece in Meanjin online. ‘The ABC is woefully underfunded. Back in the mid 1980’s when the Government had around $64 billion to spend, it gave the ABC about $365 million.

The Government now has about $520 billion to spend and gives the ABC just under one billion.

‘If the ABC’s funding had simply kept pace with inflation, it would have an extra couple of hundred million to play with, instead of facing further cuts. But if its share of growing government revenue had stayed the same, it would have comfortably more than double its current budget, which is coincidentally what some other countries like the UK and Germany spend on their public broadcasting.’

With a hollow laugh, he reminds us that the government has released The National Broadcasters Efficiency Review. It went to the government in December 2018 and has been hidden away for almost exactly two and one half years. It contains a lot of data and makes a few trivial suggestions.