TV pioneer Reg Grundy was a very smart business person, so his name on an award to develop game shows is fitting.
David Tiley 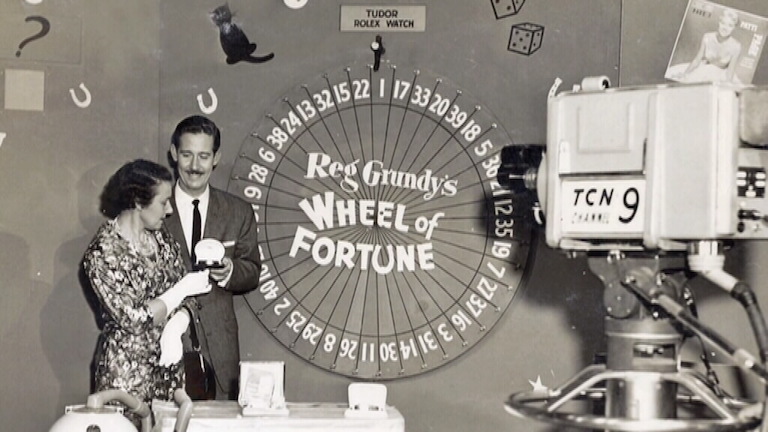 Reg Grundy started with this tacky set and ended up with an enormous superyacht. Sensibly, he kept all his intellectual property.

The Australian Academy of Cinema and Television Arts has announced the finalists for Year Two of an award named in honour of Reg Grundy, pioneer of game shows and repackager of foreign formats. Also Neighbours, The Young Doctors and Prisoner.

Awards have become a prime publicity tool because the givers make money out of running the ceremony and the winners get attention so they can sell something. Even a medal at the Olympics is reported as a dud if the athlete doesn’t get a sponsorship deal. With no pretensions to art and meaning, this award is a pragmatic commercial tool, crafted to gain attention.

It will ‘support new ideas in screen entertainment and fast track new and original productions,’ according to the release. ‘The 2021 AACTA Reg Grundy Award was open to any Australian with a new idea for a television competition program, and with $50K on offer, is the largest prize of its kind in the world!’

So, AACTA reasons, exposure is a good idea. This one looks at competition shows.

Read: Selling Australian formats overseas – it can be done

Australian Graffiti is a stylish, modern reality competition where talented street artists put their skills and creativity to the test. They will compete in a series of unique and inventive challenges. Challenges that will help transform a town in need into a captivating outdoor gallery. The artists will hope to impress industry icons enough to go on and win the ultimate prize.

A game show where the players throw the questions away… but they keep coming back.

Fun family viewing in an original and distinctive take on the classic game show format.

Pass it On! – Tylah Pratt

A challenge-based comedy show in which six personalities work in pairs to compete in a series of outlandish tasks, whereby one team member is given a rapid masterclass on a random subject and required to pass the lesson on to their teammate as best they can to then execute the task in a real world scenario with the team judged by the end result.

Teams of athletes, each made up of people with and without disability, undertake challenges of strength and skill as they work together to battle each other for crowning glory.

The Second Best Game Show takes the quiz show format and destroys it by asking one question: ‘What would happen if it’s the person in SECOND PLACE that takes home the prize money?’

The named judges are

The award is a kind of game show in itself. Contestants will pitch live or live/remote to the judges and the process can be viewed on Tuesday 7 December in the AACTA Screenfest streaming program.

There is an additional prize of $10,000 to someone under the age of 25 who presents ‘a TV show pitch that impresses the judges’. We want to see some determined 10-year-olds. And maybe a reality show about groups learning skipping games from scratch.

The National Film and Sound Archive has located what may be the first filmed game show in Australia. An episode of Ask Me Another hosted by Jack Davey was broadcast on the radio in 1953 but recorded as a pilot three years before television came to Australia.

The pictures are deliciously crisp, the panellists were used to improvising and the suits looked owned, not rented. The sound is a hoot in a different way because it wasn’t mixed, some was off mike and the cutaways were mute, but the show is still a lot of fun.

Last time, the Grundy tick went to WTFN for Seven Pups. This is not the pitch but a context piece.