Nitram and The Newsreader dominated the glam awards ceremony at the Sydney Opera House, while images of David Gulpilil lit the sails outside. Here's the complete list of winners and some red carpet footage.
Rochelle Siemienowicz 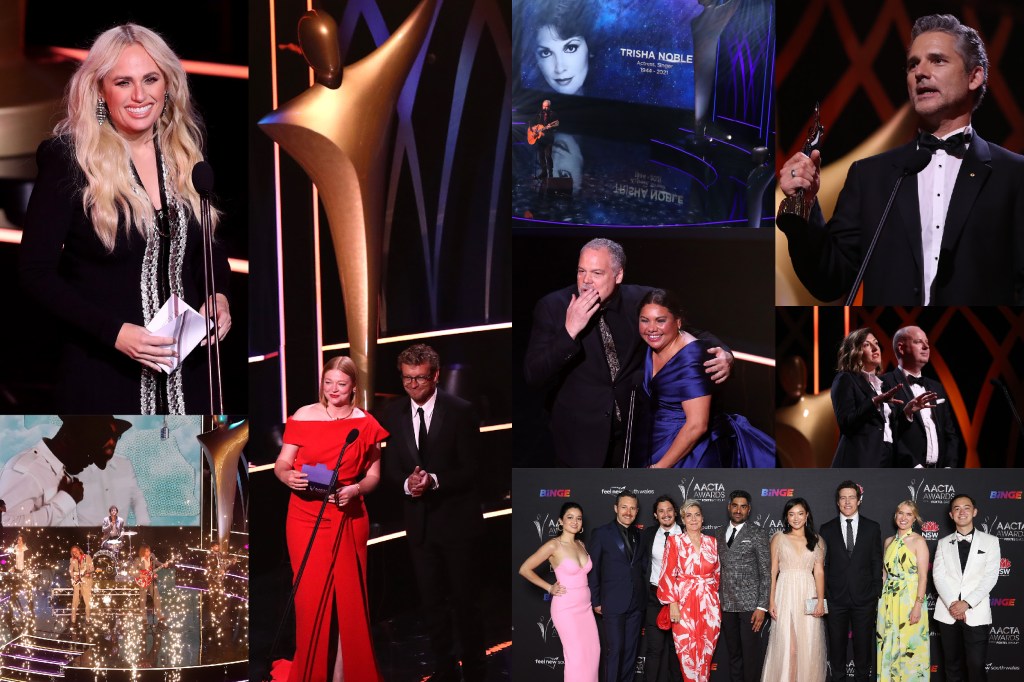 After this horror year, even the most jaded of us are hungry for red carpet pictures and the sight of genuine stars turning out to celebrate the achievements of the industry. Bring on the spectacle of last night’s AACTA Awards Ceremony, held at the Sydney Opera House. Baz Luhrmann was there, Eric Bana was there (winning the audience award for Favourite Actor), Taika Waititi turned up, and Baker Boy performed.

There was some genuine Australian diva dress action, coming from the likes of Deborah Mailman in queenly royal blue, Sarah Snook in red, Susie Porter in hot pink, Rebel Wilson and Rachel Griffiths in gold. (She won Best Supporting Actress in TV for her turn as a wily politician in the ABC’s Total Control.)

Yes, the whole awards process is flawed, and yes some of AACTA’s ever-evolving categories seem arbitrary or even cynical, but on the whole, good productions were recognised, many of the awards remain judged by peers and even from a distance, last night’s Ceremony (broadcast on Ten with highlights coming to Foxtel and AACTA TV) looked like something pretty special.

Just a week after his death, and on the 50th anniversary of his unforgettable debut in Walkabout (1971), the late iconic actor and performer David Gulpilil Ridjimiraril Dalaithngu AM was awarded the Academy’s highest honour, the Longford Lyell Award, in recognition of his outstanding contribution to the Australian screen Industry.

It seemed fitting that the documentary about the actor, My Name is Gulpilil (directed by Molly Reynolds and produced by Rolf de Heer, Peter Djigirr and David Gulpilil) won the AACTA for Best Documentary. The film also won Best Editing in Documentary for Tania Nehme.

AACTA President Russell Crowe was there, lending star power and presenting, and also paying homage to his close friend and The Sum of Us co-star Jack Thompson for his impressive 50-year career.

Nitram and The Newsreader dominated the awards, collecting 13 honours between them. The Newsreader led the pack for television with five AACTAs, including acting wins for Anna Torv and William McInnes, while Fires, also for the ABC, won Best Miniseries or Telefeature.

Nitram took out the major categories for film, including Best Director and Best Film and wins for all four of its lead cast of Caleb Landry Jones, Anthony LaPaglia, Judy Davis and Essie Davis.

The no-frills all-laughs ABC series Fisk won for Best Narrative Comedy and its star and creator, Kitty Flanagan, was named as best comedy performer; while the ABC’s Bluey continues its awards run with Best Children’s Program.

Up against some stiff competition, composer Christopher Gordon won Best Score for Film for his work on the smallish coming-of-old-age drama June Again, starring Noni Hazelhurst and Claudia Karvan.

Read the whole list below, some of which were announced previously at the AACTA Industry Awards earlier in the week.

Congratulations to all the winners. And here is a bit of red carpet footage if you’re in the mood.