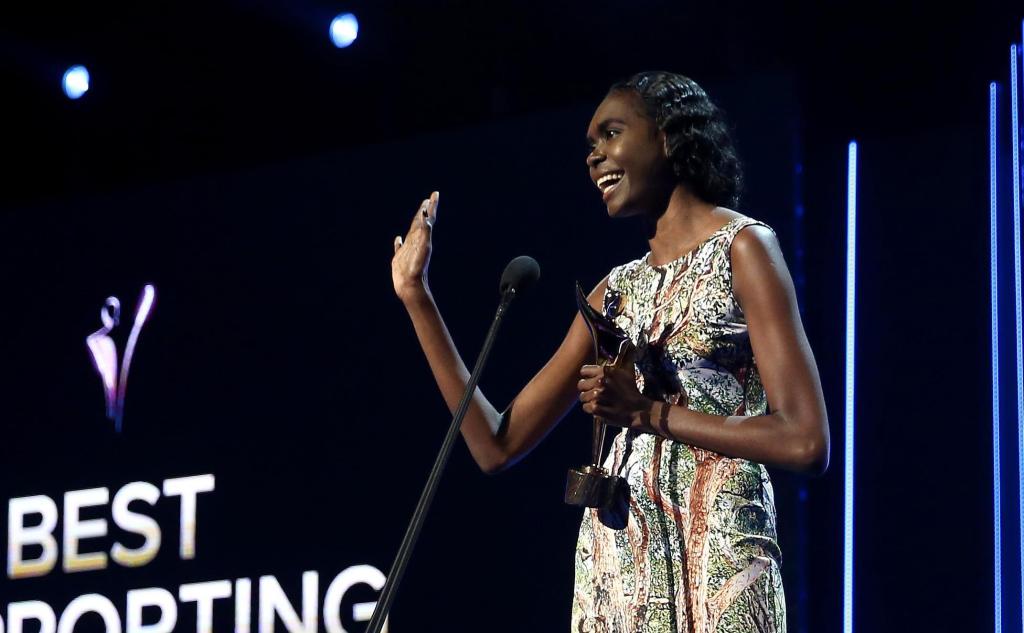 The Australian Academy for Cinema and Television Awards (AACTA) held its industry luncheon presented by Foxtel, on Monday 2 September at Sydney’s Star Casino. It celebrated the achievements of industry practitioners, or the cast and crew, with the pizzazz to make the event special.

Several speakers mentioned the bush fires that were still raging in rural New South Wales, and which were spewing smoke into the city, producing a haze of smoke that could be smelled and even tasted.

According to AACTA chair Alan Finney, the lunch attracted more than 700 people, so the event has developed a distinctive appeal over the last eight years.

The first award, for Best Sports Entertainment Program and Best Sports Coverage, was accepted by industry veteran Mick Malloy. He commented that this was the only country where you could win an award for sitting in a pub drinking beer and talking about the footie, adding that he’d been fired by every network in Australia.

The awards were evenly spread across all the nominated programs but in the feature film categories The King stood out. Directed by David Michôd, one of four gongs picked up by this Netflix-funded international film (produced in Australia, shot in England and Hungary with funds from the US) went to Joel Edgerton for best supporting actor. In his speech he mentioned that he and Michôd first developed the genesis of the idea on Bondi Beach eight years earlier. Edgerton is also a producer and writer on the film and has been nominated in categories to be awarded on Wednesday. The King won three other awards, for best cinematography (Adam Arkapaw), best costume design (Jane Petrie) and best production design (Fiona Crombie and Alice Felton).

In television, the Foxtel drama Lambs of God took out seven awards out of a possible nine with another five still possible in Wednesday’s awards.  Jeffrey Walker won for best director of television drama or comedy. In accepting the award, Walker mentioned that he had been attending AFI AACTA Awards since he was nine, when a child actor starring in children’s productions (as well as Jocelyn Morehouse’s Proof). Walker also won last year for directing the telemovie Riot.

Lambs of God also won for best hair and makeup (Zelijka Stanin, Paul Pattison, Cheryl Williams and Anita Howell-Lowe), best cinematography by Don McAlpine, best original score in television by Bryony Marks, best sound by Stephen R. Smith, Nick Emond, Paul Devescovi and Mia Stewart, best costume design for Xanthe Heubel, and best production design by Chris Kennedy. Kennedy was singled out for praise by director Jeffrey Walker, who attested that production design had been a real challenge for this series and a key to its success.

Jennifer Kent’s The Nightingale won two awards: best supporting actress by first-timer Magnolia Maymuru and best casting by industry veteran Nikki Barrett. Maymuru was clearly surprised to win the category and her wide grin was the highlight of the lunch.

Other feature films to win an award were Hotel Mumbai for best editing, taken out by director Anthony Maras and Peter McNulty, Judy and Punch for best original score by Francois Tetaz, and Danger Close: The Battle of Long Tan for best sound taken out by Liam Egan, Craig Walmsley, Alicia Slusarski, Robert Sullivan, Tony Murtagh, and Les Fiddess.

Other television drama series to score awards included The Hunting for screenwriters Niki Aken and Matthew Cormack, and The Cry for best editing for Alistair Reid. In accepting their award for best screenplay in television, Niki Aken thanked ‘the boys I crossed swords with in high school for giving me such tremendous ammunition 20 years later.’ Aken added that she was ‘hopeful for a world where boys and men can communicate honestly openly and with empathy. Because no matter what strides we make towards equality, no one is free unless we are all free and that includes the freedom to be vulnerable.’

Documentary awards were won by Bryony Marks (her second award for the day) for best original score for 2040, Olivia Hoopman for best directing for Destination Flavour China, and best sound went for 100 Days To Victory to Ric Curtin, Xoe Baird, Laurie Chlanda and Adrian Tucker.

Animated children’s series Bluey won the best children’s program category. Produced in Queensland for ABC and BBC, the show has crashed through internationally  and has been nominated for an Emmy.

Several new awards arrived this year in areas like sports entertainment, online and short documentary. A new award for best online series was won by Wengie, an Australian production that showcases beauty tips and music and scores 770 million views, perhaps an odd criterion for excellence.. Another new award for best short documentary, an innovation no doubt with an eye to the emerging sector, went to Home Front – Facing Australia’s Climate Emergency by Luke Taylor.

While The King and Lambs of God shone out, there was a substantial spread of titles in these craft awards.They feel inventive and well conceived, while producers are attracting excellent teams to smaller projects.

As always, the visual effects and animation award showcases work at the highest international level. It was given to Melbourne and Santa Monica company Luma Pictures for work on Spider-Man: Far From Home, a Columbia Pictures and Marvel Studios film.

Foxtel announced at the luncheon that they will again sponsor the AACTA awards in 2020, providing a welcome level of stability and solving a problem which can dominate the planning for most of the year.

The 2019 AACTA Awards Ceremony will be held on Wednesday 4 December, televised on Channel Seven at 8.40pm, with encore screenings on Foxtel.

The 2019 AACTA Awards Ceremony will be broadcast on Wednesday 4 December, Channel Seven from 8.40 pm, with encore screenings on Foxtel.

Mark Poole is a Melbourne writer and film director.