Seeing reality cross over with sci fi in Stan's 'The Commons' was disturbing but not depressing for this apocalypse-shy viewer.
Rochelle Siemienowicz 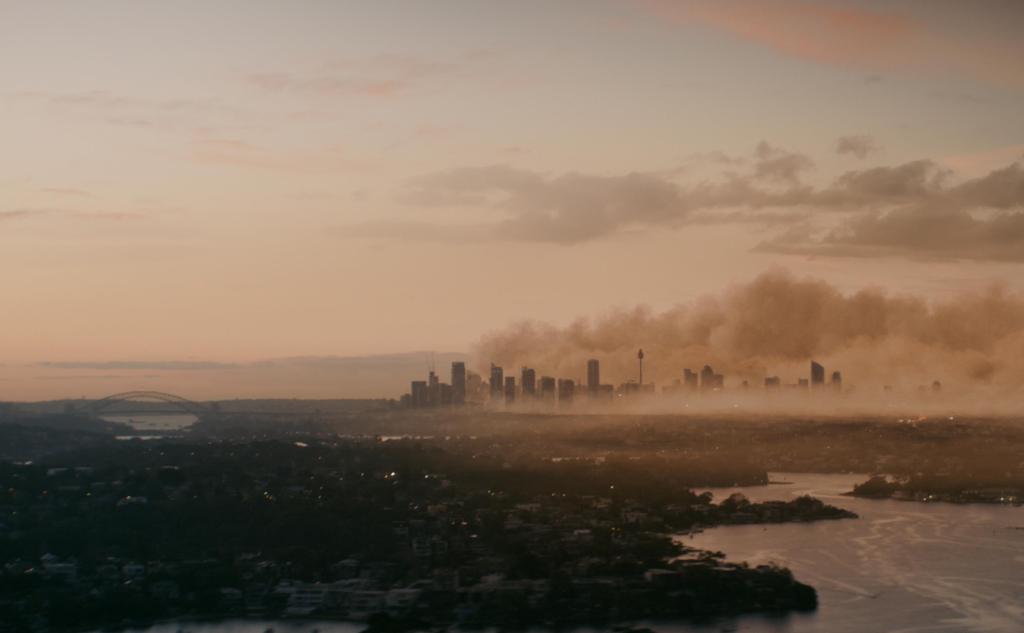 A CG-rendered shot of dust-covered Sydney from ‘The Commons’, courtesy Stan.

We shut the curtains on the hot and burning world in the week after Christmas. Avoiding the supermarket, eating leftover pavlova from the fridge, we turned on the TV in search of streamed fiction to take us away from endless updates about the inferno: the suffering animals, homeless humans and corrupt politicians.

Our 16-year-old son was starting to question the point of living, arguing he should be allowed to get drunk on New Year’s Eve ‘because it’s the end of the world anyway.’

Clearly we needed a break.

Yet something made us choose The Commons on Stan, an 8-part series set in a near future Sydney where extreme temperatures are the norm. Violent dust storms blanket the skyline and persistent drought has displaced huge sections of the population. Arriving by the thousands each day, these climate change refugees compete for ‘urban residency permits’ in the relative oases of the big cities. Meanwhile, a deadly superbug kills ten percent of its victims immediately, and school children stay home when it does rain, because the drops are acidic.

Terrifying visions of apocalypse have always been vividly present in my life. Raised as a Seventh-day Adventist, with constant predictions about the end of the world, as interpreted from the biblical Book of Revelations, I left this behind when I went to university, only to find myself with a thesis supervisor who is a renowned environmental philosopher. He has spent decades predicting what’s now coming to pass, and I used to walk away from our coffee meetings with a flagging will to live.

As the decades have gone by and I’ve become a parent, entrusted with the mental health of another young person, I’ve felt deeply the importance of limiting exposure to catastrophic images. There are times when we need to face bleak realities in both news and fiction, and other times when emotional survival means shutting the world out.

And yet here I was, curious to see The Commons because I’d heard it was more of a relationship drama than a survivalist horror show. Created and written by Shelley Birse (The Code), and starring UK actress Joanne Froggat (Downton Abbey), the female-driven narrative concerns one woman’s obsessive desire to become a mother in the face of all reason, including her husband’s wishes and her own medical condition. As Birse has said in an interview, ‘There is this great dichotomy between having a child and also knowing what sort of world is coming for them.’

In the same interview, Birse emphasises the importance of hope and humanity in storytelling around these issues. She’s also quoted as saying:

‘During my research for the show, I spoke to climate scientists and futurists about how and why we’ve failed to engage with climate change. I made a really conscious effort to realise that I didn’t need to tell a story with a lot of violence in it. There is an epic scale to this show but the stories within it are always going to be very intimate.’

Like another near-future series, the brilliant and devastating British drama Years and Years created by Russell T Davies, The Commons left its greatest impact on me with its small details of life imagined just a few steps down the track in terms of ecological collapse and technological advance.

Read more: TV Review: The terrifying near-future of ‘The Commons’ feels all too real.

These are the details and scenes that linger from The Commons: the constant checking of the weather updates displayed on a screen on the family’s smart fridge in order to determine the day’s activities; the fact that a single piece of bloody steak is so precious that it’s given as a black market gift to celebrate a pregnancy; the way that houseplants and artificial gardens sprout up inside buildings as healing antidotes to the large scale destruction of nature outside; the way that the pristine city centre becomes a ghost town for two hours of the day when all power is shut down and humans head inside to shelter from the weather.

Nature plus technology in ‘the Green Cathedral’ – a healing space inside a hospital in ‘The Commons’. Image courtesy Stan.

Reported to be budgeted at around $25 millionThe Commons is the most expensive drama so far for Stan, the Australian streaming service owned by Nine. The quality shows. The performances, from a cast including David Lyons, Rupert Penry Jones and Damon Herriman are excellent, and the visual effects convincing. Production design by Tim Ferrier is superb, especially in its evoking of a world where the rich few insulate themselves in high rise ‘sanctuaries’, while their Polynesian concierges live in their cars and the middle classes sweat it out in crumbling but cute rentals.

‘Oh my god, we’re watching a documentary,’ my partner joked as a CG altered aerial shot of Sydney filled the screen, storms of dust threatening that iconic skyline with its stunning bridge and fanciful Opera House. It was all too reminiscent of the news we had just switched off.

He wasn’t alone in noticing. The image below, comparing the two, was shared widely on social media:

All the reviews I’ve read of The Commons have noted its timeliness. This one at Screenhub says ‘the risk with this kind of near-future story is that real life events will overtake the future being predicted.’ Writing for the Sydney Morning Herald, Craig Mathieson notes, ‘Reality is now moving faster than any production schedule’, while for the same paper, Michael Idato says, ‘There is a certain serendipity in The Commons landing during one of the most brutal fire seasons on record.’

Trying to recommend the show to some of my writer friends at a dinner party last week, I got the same response from two women: ‘No thanks! I need escapism. I need to be able to sleep at night.’

But strangely, watching the show in the middle of a national environmental crisis was comforting. Not because it necessarily provides a happy ending for all its characters (no spoilers here), but because it reinforced the importance of community, connection and civic resistance.

And yes, in its central story about motherhood, the show underlined the essential irrepressible hopefulness that must be nurtured, like a tender green shoot pushing through ash.

It’s tempting to say that the bushfires in Australia this summer have changed everything; that as a nation we are waking up from complacency as we literally choke to death. It would be hopeful to think this is the start of something, and and that drama like The Commons, arriving serendipitously on Christmas Day, enables us to vividly picture the things we will lose if we don’t make changes, and also the ways we might survive and adapt, whatever comes. I found it both galvanising and reassuring.

In a piece that’s very much worth your time over at Meanjin, Tim Hollo, executive director of the Green Institute, eloquently wrote this about this summer and the end of the world as we know it:

‘This summer’s fires have destroyed the myth that we humans are separate from nature, and they’ve burned away the pretence that our current system of government is capable of saving us.

But the kookaburras are still singing.