Finding her way to a film career through a love of street art, this director gives good advice to others lacking the confidence of traditional pathways.
Rochelle Siemienowicz 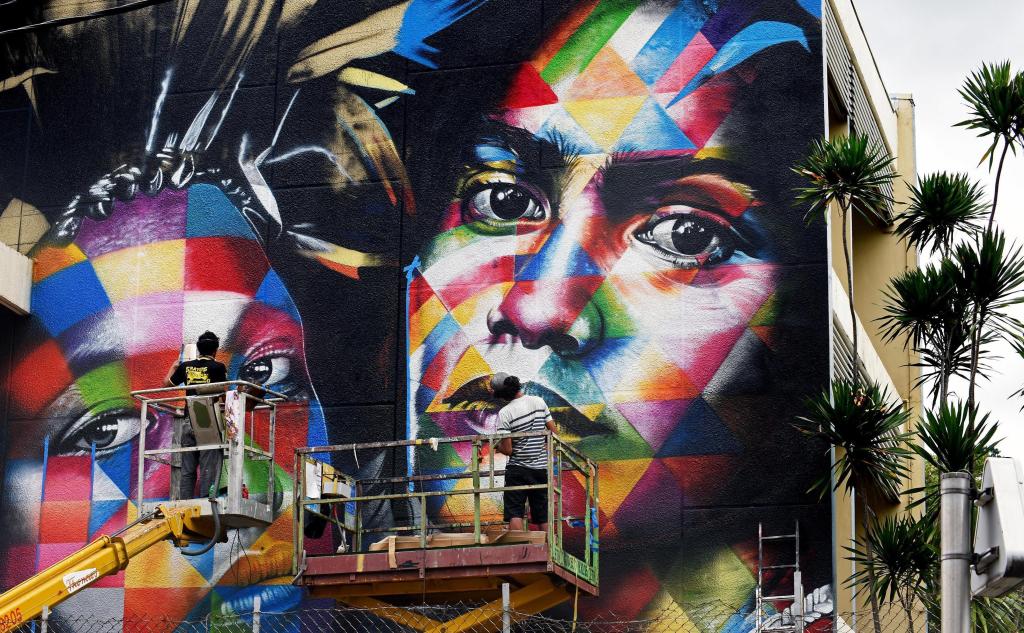 Artwork by Kobra. Photo by Martha Cooper, courtesy of the production.

Selina Miles, the director of this year’s festival hit Martha: A Picture Story, never set out to be a documentary filmmaker. As a young woman living in Brisbane she studied multimedia design and was interested in the visual arts, especially grafitti and the global street art movement. ‘Film never really clicked for me until I had a friend who was doing a painting in a studio and I started documenting him,’ she says on the phone to Screehub. ‘It was a lightbulb moment and I’ve been working in film ever since, finding my way through trial and error. Lots of error!’ she laughs.

That early interest in street art led Miles to making a five-minute hyper-lapse video Limitless, that went viral in 2013 with more than 12 million views YouTube. Widely praised for its cinematography and editing, it’s a mesmerising piece of work, more akin to music video than documentary. It shows a group of artists throwing paint around, transforming the insides of an empty warehouse into a striking gallery of bold beauty.

The success of Limitless took Miles around the world as a videographer where she was invited to cover street art events. ‘That was a game-changer for me,’ she says. ‘It stopped me having to do work that I wasn’t interested in, and through that exposure I managed to get representation in London and New York and get into commercials. Since that time, I’ve balanced ad work with the stuff that I really love, and for example, with one ad job I managed to finance the first six months of work on Martha.’

Now based in Sydney, Miles says her adventuring meant there were about four years where she had no fixed address. It was during this time she got to know Martha Cooper, the subject of her vibrant documentary portrait of the now 75-year-old New York photographer who is still chasing trains and crawling drains with a ready camera. Cooper is also the co-author of the 1984 graffiti bible, Subway Art, which has the very cool honor (according to the press kit) of being one of the most stolen books of all time.

Humble and unassuming (as Miles herself seems to be), Cooper emerges in the film as an unsung hero and pioneer, not just as a street photographer, but as an older woman still working and visible in the media. As Miles notes, ‘It’s such a shame that women over a certain age aren’t seen more, because as we see with Martha and her friends, they just have so much to give and there’s so much we can learn from them. It’s 2019! It’s time we got over these antiquated attitudes towards women and their role in society.’

Certainly, the world seems hungry for such a story. In his review of Martha, when it showed at the 2019 Sydney Film Festival, and won the Documentary Audience Award, Adrian Martin said it would count among the best Australian films of 2019. The Hollywood Reporter described it ‘Eighty of the happiest minutes documentary-lovers are likely to spend in a theatre this year.’

Miles says her initial plan was to make a ten-minute film about Cooper, but in the first few days of shooting she was overwhelmed with the riches of the subject’s life: her former career at National Geographic, her old friends and colleagues willing to talk to camera, and an apartment full of ‘beautiful artefacts’. Miles figured there was no sense in making a 20-minute or 30-minute film, and so the idea of a full feature took form. She cut together a three-minute sizzle reel of what she thought the story was about, and showed it to producer Daniel Joyce (Barbecue), who’d been introduced to her by Andrew Macdonald. Macdonald had produced The Wanderers (2017), Miles’ short documentary series about six Australian street artists. ‘Drew is an amazing writer and director in his own right,’ Miles remembers, ‘but he saw an opportunity with the ABC’s ‘Art Bites’ series and proposed it to me as a project.’

Joyce asked all the right questions and was able to see the big overarching narrative in the material that Miles had not yet clearly perceived. He was also instrumental in assembling an Australian creative team and agency support (Screen Australia, SAFC and Create NSW) for a project which, at first sight, seemed an unlikely Australian story. This creative team included executive producer Jennifer Peedom, cinematographer Michael Latham (Ukraine is Not a Brothel) and, crucially, editor Simon Njoo (The Nightingale).

The film began shooting in February 2017, with multiple trips, mainly to New York but also to Miami, Baltimore and Berlin. Miles says some trips she did solo, and the biggest the team ever reached was herself, a DP, sound person and fixer. ‘I think that’s the ideal size for this kind of project because you can all get into a single taxi or car. Anything bigger, your returns on your money diminish quickly.’

Finding the Shape of the Story

A firm deadline on when to stop shooting came with the fact that a rough cut of the film had been accepted by the Tribeca Film Festival. (Originally, the hope had been to premiere at Sundance, ‘but that was a little bit unrealistic but still we tried.’) As with any documentary project, the editing process was massive and daunting.’It took many weeks longer than we were expecting. We cut it down to about 20 hours of footage and had that transcribed, which was expensive but fully worth it,’ Miles says.

Editor Simon Njoo came into the process quite late, says Miles, ‘and it was like the cavalry coming over the hill to save us because I was quite confused at that point. He’s just an amazing editor and human being, and he filled me with confidence. He’d sit me down on a daily basis and say to me, “Selina, this is your film and I’m here to help you achieve your vision.”‘

Miles says that athough she loves to edit, and does a lot of editing, (‘It’s my comfort zone’) she often lacks the confidence of those who went to film school. ‘Sometimes I don’t have the words to articulate what I’m trying to do, but I can cut it myself, so Simon was more than happy for me to show him rather than explain it. He’d let me jump on the tools anytime. A lot of people say a director shouldn’t do that, but it really worked for us.’

Building confidence and challenging an inner lack of confidence are recurring themes for Miles. She says she remembers doing her first big commercial in London with a crew of 50 people. Feeling daunted after the first day she asked her first AD if she was on the right track. ‘He said to me, “Nobody’s scrutinising you. This isn’t the biggest job of everyone else’s career, it’s just a Tuesday for them. All people want from you is a decision and the only time people will notice that you’re not doing your job is if you can’t make a decision.”‘

Miles says that filming Martha has changed her in so many ways she can’t remember who she was before. She’s even adopted some of her subject’s mannerisms after seeing so many hours of footage. She also says that as a woman in her early 30s pursuing a career, she finds Martha Cooper infinitely inspiring. ‘She’s a woman who’s done what she wanted to do, pursued her career and not let traditional roles define her. There are so many different ways for us to live our lives.’

Martha: A Picture Story is in cinemas on 28 November, 2019. Distributed by Umbrella.