ReedMidem's awards bag acknowledges the power of SVOD as Sampson tiptoes round the temple with the money-changers.
László Kriston
[This is archived content and may not display in the originally intended format.] 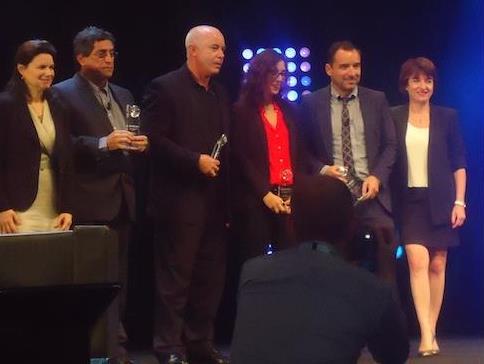 Image: Les Sampson receives his award, courtesy of Laszlo Kriston and his phone.

Slowly but surely the need for glamour and recognition is seeping into even the backest of backrooms in the screen trade. ReedMidem now has a Content Trendsetter Award which it gave to four leading acquisitions executives: ITV’s Sasha Breslau, Sundance TV’s Christian Vesper, TV Globo’s Paulo Mendes and Australia’s very own Les Sampson, Director of Acquisitions at Nine Entertainment’s StreamCo.

Sampson has been playing the market with his master’s money at least since he became general manager of acquisitions at Foxtel in 2000, before becoming director of acquisitions, daytime programming and digital television at the Nine Network.

Nine has enough faith in Sampson to pass him to StreamCo, its $100m joint venture SVOD deal with Fairfax up against Presto, Quickflix and naughty people who stream Netflix. Jittery on stage, he revealed that most of the ten thousand hours he needs before the 2015 launch of the service is already signed up, but he is still looking for product in niche genres, primarily kids and gay/lesbian (LGBT) content.

Looking for the session on the net, we discovered the video of last year’s Acquisition Superpanel, which featured Ross Crowley, the director of programming, Foxtel Management, who was introduced after Carmi Zlotnik, the managing director of Starz Media, an American cable network, who gravely informed us that he wants to buy material which will induce people to subscribe.

Crowley said the same, but more subtly, of the twenty thousand hours of programming Foxtel acquires each year. ‘We really give the channels a lot of autonomy in developing their own theme and flavour… my role is oversee the investment strategy across that breadth and look ahead – are there themes, are there people we should be developing relationships with, are there forward trends in the nature of society that will reflect where we place our program investment… half of our decisions at all times are for existing subscribers, and ..the other half of the same decision is for the people out there who are demanding maybe a little bit more or something different.’

He pointed to the anti-siphoning legislation as an important problem for Foxtel when it opened eighteen years ago. Deprived of an easy headlock on sport, ‘We absolutely target interests and groups that are not the 25-54 that the networks and the grocery buyers are looking for on network television, and we absolutely target genres that were otherwise relegated to late night. For example, in the very early years one of the very, very easy wins – and ironically it has become a mainstream genre now – is the sci-fi fantasy area.’

The  networks pushed that market to eleven at night, and offered kitchen sink dramas at 8.30. ‘We were able to put them into zones in prime time and they were just instantly thankful.’

His co-panellist Pedro Lascurain, the head of acquisitions for Mexico’s TV Azteca, had already explained that his company had been burdened by TV series that came in the packages for the movies that his audience apparently wanted. By running them intensively in the evening, the network discovered they worked a treat.

Crowley acknowledged that Foxtel has a different approach to packages. ‘We have buying groups and managers across the different genres who were actually meeting some distributors two or three times to focus on different parts of their catalogue, because some of these catalogues are quite large. We then aggregate them back together and say, “right, there’s two hundred hours of factual content plus fifty hours of lifestyle plus maybe a format or two..”, They are grateful for us doing that for them, rather than the opposite, I would suggest.’

Zlotnik then became more serious, and provided some interesting touchstones. ‘The thing that we’re looking for is programming that will create emotional engagement with our audience. I think we all realise that all transactions, no matter how much intellectual effort we put behind them are really driven by emotion. So its storytelling that feels compelling and my own personal meter for that is two that are going on constantly – and that is the truth and spectacle meters. I try to look for things that relate to the human experience that touch us and touch our humanity and look for things that have a certain amount of spectacle because you have to cut through the din of everything else that’s out there. And deliver something that’s not commonplace, not trite, not what the audience is used to seeing – and that’s what makes for a compelling program.’

‘Spectacle could be a big fight scene, it could be special effects, it can also be an emotional performance by an actor alone on a stage.’

Piv Bernth, the head of drama, DR Fiction of the Danish Broadcasting Corporation in Denmark was on the podium too. She was an EP and producer on many episodes of The Killing, and an EP on The Bridge as well. From the very beginning, they wanted to make the world’s best television show. ‘We didn’t achieve that’, she said, ‘but that was the goal. We really need to have the ambition. That is the signal we sent, and I sent, to the creative community in Scandinavia. You need people who are ambitious on a creative level. We need to do very local stories because we are a public service broadcaster, but very local stories become often greater stories, and more universal stories, if you are true to them,’

‘One of the reasons we decided to do one killing in twenty episodes …. we were so fed up with the ways stories were told with one episode, one murder case, we solve it, we are happy, then we move on to another one, and we thought it pretty boring and mechanical.

‘It is a signal to be courageous.’

Another newsworthy fact on the open-purse front is that the U.S. network A+E has upped the ante, formed A+E Studios (The Returned) and is now soliciting co-production proposal. The budget level they aim for is US$3 million per hour.

Last, but not least, as a follow-up to our earlier deals rundown, here follows a second compilation of further deals brokered in Cannes:

László is a film critic and journalist, originally from Budapest, who is very active on the international festival scene.