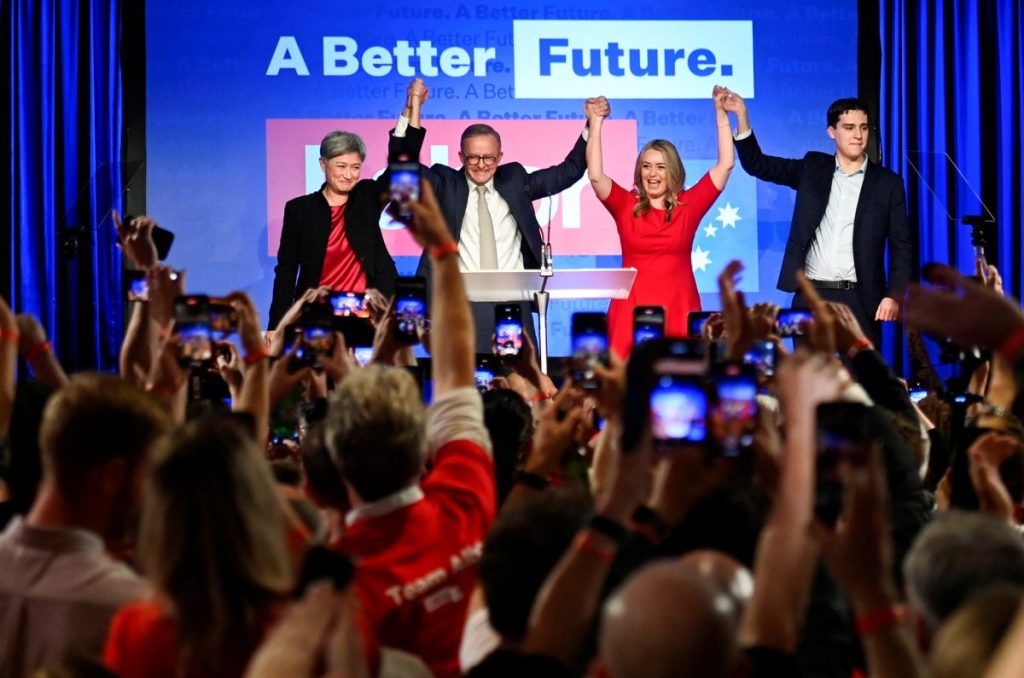 Anthony Albanese has been elected the 31st Prime Minister of Australia. Image: ABC

After years under a Coalition government that did not institute a cultural policy, the screen sector is now looking with hope at the new Labor government and its plans for the arts.

Incoming Arts Minister Tony Burke has confirmed that now that Labor is in power, State and Local governments will be ‘properly consulted’ to ‘chart a path forward for the arts sector’.

It is expected Tony Burke will be sworn in as minister for the arts and minister for industrial relations shortly.

Taking inspiration from the scrapped Creative Australia framework, the Labor government hopes to reinstate a solid cultural policy that will protect and nourish Australia’s arts industries.

‘Arts isn’t simply about entertainment, leisure and hobbies,’ Mr Burke said in a recent op-ed for ScreenHub. ‘At its best it affects our education policy, our health policy, our trade, our relations around the world, our industrial relations approach and is a driver of economic growth.’

Read: Election 2022: Australian film and TV – what the pollies promise the screen industry

Let’s have a look at some of the changes promised:

Welcoming arts back to government

It’s a relatively low bar to beat, but the new Labor government has promised the return of a government department with the word ‘Arts’ in its title.

The last federal arts department – Department of Communications and the Arts – was removed in 2019, rolled instead into the mouthful Department of Infrastructure, Transport, Regional Development and Communications. After all, what is the difference between a video camera and a speed camera?

In their own words, Labor now want to:

We spoke to Matthew Deaner, CEO of Screen Producers Australia (SPA), to get his reaction on the coming changes.

Deaner said that having no named arts department, and no cultural policy in the years the Coalition was in power, was quite difficult to navigate. ‘How do you ensure the right things are set up when the government has no vision for your sector?’

‘Australia’s screen sector is ready for a plan for sustainable growth and regulatory certainty that values and champions our culture and creativity.’

This is the big one. Without adequate funding, there will be no thriving screen industry. To kick off, Labor has said it will:

In short, this looks like good news all-round for Australian film and TV.

On the decision to keep Channels 31 and 44, Michelle Rowland MP said: ‘Community TV adds to media diversity, local news and content, supports local businesses and community organisations and provides a much-needed training ground for the journalists, producers and the industry talent of the future.’

The ALP has notably made no funding commitment to bolster the grant-making Australia Council.

But money isn’t everything. Matthew Deaner (SPA) said that ‘for the domestic sector to grow, finances need to come after framework’. In other words, build a strong screen industry regulatory framework before throwing money around. ‘What we’re hoping the Albanese government will deliver is something that’s more ambitious and less ambiguous.’

A preference for local productions

In the COVID years, the Liberal/Nationals government appeared to have preferenced attracting Hollywood productions to our shores, instead of bolstering local content. The new Labor government wants to shift the focus back to local productions.

Deaner said: ‘You can’t continue to attract international work without a solid domestic sector. What we’ve seen has been an expansion of international work, with no clear path for domestic IP generating, local-story exports around which the whole sector has been constructed.’

‘And I think some of the screen sector data has been hidden and masked by international pieces, when domestic has either gone backwards or flatlined.’

‘Although it is of course important for us to get this right, speed is of the essence,’ said Minister Tony Burke. ‘Creative Australia will be used as the starting point and all stakeholders including State and local governments will be properly consulted.’

With the real possibility of another coalition government – this time comprising Labor and Greens – the arts minister may consider adoption of the Greens billion-dollar Australian Stories pledge (no word has been given on this, so it’s pure speculation). If such a thing were to happen, it would mean better funding for local filmmakers, and the introduction of a new law requiring streaming services to invest 20% of their earnings from Australian subscribers back into Australian content creation.

Deaner likes the looks of what the Greens have in mind. ‘I think it’s the right ambition for the sector, because it sets up a similar layer of investment to what Canada has had, and what is currently expected in France and Italy‘.

When beloved soap opera Neighbours was cancelled, Mr Burke saw it as a warning sign for what can happen when domestic IP is thrown to the wayside. ‘Australia needs a government with a plan for our screen sector, particularly scripted drama. The Government should be extending local content obligations, not trying water them down.’

‘The Government’s dithering – including its failure to introduce content obligations on streaming platforms – has undermined Australia’s screen sector. If an Australian content obligation for streaming services was already in place would there have been a better outcome for Neighbours? Would it have found a new home, saving cast and crew the pain of these job losses?’

Which brings us to: the promise of more local content quotas on streaming services like Netflix, Stan, and Binge. Here it is in Labor’s own words:

Without specifying a percentage, it is difficult to see how this promotion would work. It’s certainly a nice sentiment, though.

Read: Tony Burke on ScreenHub: A better future for the arts sector

‘We have been alarmed at the rapid decline in various types of Australian stories on our screens since regulation to protect children’s, drama and documentary programs on free-to-air channels was downgraded.

‘The flow-on effects across the screen sector have been highly detrimental to the production ecosystem. A government that values creativity will address this deficit.’

Finally, Labor will put a focus on First Nations media content, and in their words:

‘We have the oldest continuing cultural practices on the planet,’ Tony Burke said. ‘The first pillar of Australia’s cultural policy should be First Nations.’

Details on what this will look like practically remain unclear. Deaner said that SPA aims to ‘play a role in regulation to ensure the advancement and support of First Nation’s storytelling. ‘

We know that First Nations people are watching the new government closely, so to drop the ball in this area would not go unnoticed. Prime Minister Albanese made his first gaff in his winning speech by not mentioning the specific owners of the land he was on (instead using generic terms), and it won’t soon be forgotten.