Gordon Quinn, producer and campaigner, finds the heart of verite for AIDC 2020

Is it skill, strength or virtue? Gordon Quinn, known as the Documentary Buddha, reveals some secrets about being him.
David Tiley 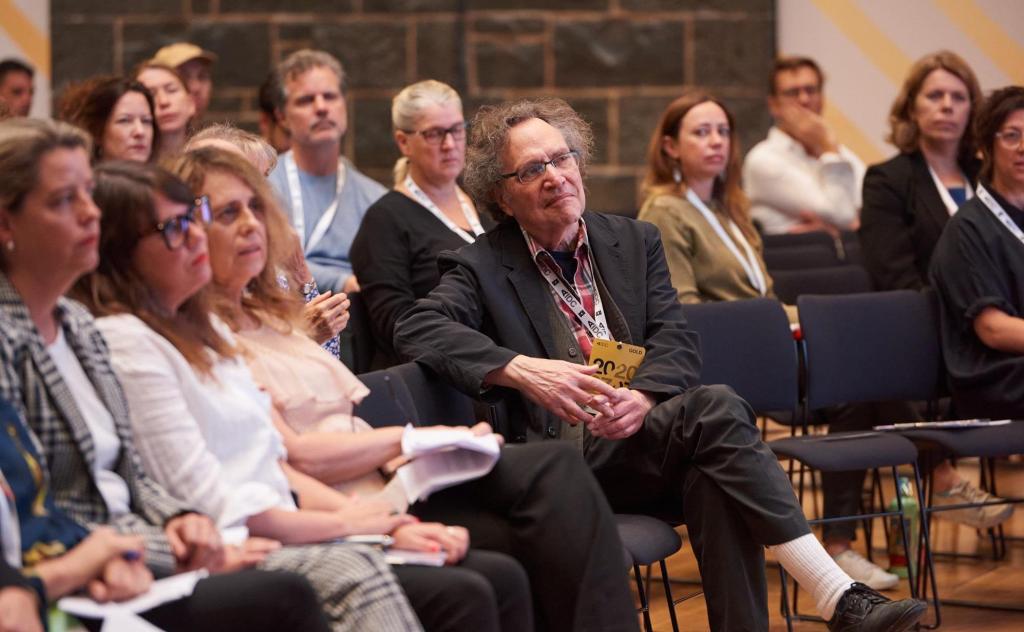 Gordon Quinn sits quietly at the Australian International Documentary Conference, obviously older, poised and patient. He is invited to the podium and navigates himself cautiously up the steps, staring at the ground, suddenly unsure. He is 78 years old and has been a pioneer of the US indy documentary movement for 60 years.

He talks and time is suspended and age disappears. He found the mature essence of documentary long ago and we are transported by his clips.

‘What got me into documentary initially, I saw Happy Mother’s Day as a student at the University of Chicago. it was made by Ricky Leacock and Joyce Chopra and I was like, “Oh, that’s what I want to do.”

‘But I think part of the reason we’re here, fifty years later, is because we don’t keep making the same films in the same styles. We’re always paying attention to what’s going on in the world around us. And I was struck by the Welcome to Country, and the sense that first principles matter, our core values matter in what we do because we’re dealing with real people and real stories in the world. We’re not just entertainment.

‘And we’ve always seen documentaries having a role to play in a democratic process in a democratic society to bridge the gaps between people and histories and kind of the issues that any democracy grapples with as it tries to live up to its best values.’

In 1966, he started Kartemquin Films with Jerry Temaner and Stan Karter as a non-profit to make films based on the notion of ‘Cinematic Social Enquiry.’ Kartemquin mashes their name together, and also resembles the word ‘Potemkin’ from the very beginning of non-fiction filmmaking and the Russian Revolution.

The company soon became the heart of a Chicago collective of filmmakers based on the political struggles of the times.

‘In the Sixties we were going to change the world. And if you look at some of our films from that period, with driving narrations and a verite thread we’re following people’s stories. We were also providing a kind of Marxist analysis.’

They kept doing this for 27 years, running on scraps of money, deep in politics, a key part of an intense filmmaking movement reaching out to minority filmmakers, telling stories from the point of view of the silenced. That all started to change in the late 1980’s.

‘But these very tall guys had just graduated from Carbondale and downstate, Illinois, and walked into Kartemquin.’ They wanted to make a film about street basketball. ‘And I would say within the first couple of months they had evolved into the idea of following these two young men all the way through high school, and the film really changed to become an epic project that we had very little funding for.’

The tall guys were Steve James, Peter Gilbert and Frederick Marx. ‘They had two things – a great title, which is usually the last thing we manage to come up with in a documentary – and they had $2,500 from the Illinois Arts Council, which was critical. It made me understand they could write a proposal.’

The film took nearly eight years to make, had 250 hours of raw 16mm footage, cost $2.4m in Australian 2020 dollars, and ran for 170 minutes. It was called Hoop Dreams and remains the best-known film in the company catalogue to this day.

Here is a piece of the twentieth anniversary digital restoration.

In a year or so it made $30m at the box office and Kartemquin divided the money up around the participants and kept a useful war chest. Now they had cash, a Sundance launch, awards from Peabody, the Prix Italia, IDA, Amiens and an Oscar nomination. They could think on a grander scale.

While they took that opportunity, Quinn says the project took them back to their verite roots.

In 1998 they finished Vietnam, Long Time Coming, funded by PBS, made in a mere year. It was the only project with a single funder and they did not have sufficient control. It was a good film but a disappointment. By building budgets from multiple funders, they always managed to make documentaries in their own terms, which included extremely long edits of up to two years.

In 2004 they released The New Americans, a seven hour project with multiple storylines and directors. It is described as, ‘Four years in the lives of a diverse group of contemporary immigrants and refugees as they journey to start new lives in America’.

‘We knew that immigration was heating up as a topic in America. And we felt that somebody wasn’t really a part of that conversation, which was the actual immigrant families who were coming to America, so we wanted to tell their stories. And we had some key ideas – one was when we looked at other work that is being done  we found that a lot of them start at the border, they start with immigrants coming into the US and we wanted to start in their home countries, way before they immigrated. We wanted people who were still living their life, but planning to immigrate at some point.’

That idea is immensely challenging. Where would they find their families with the world as their canvas? How long would the stories take? How do they wrangle so many crews and locations and languages?

Gordon Quinn took us into part of the Mexican story, directed by Renee Tajima-Pena and Evangeline Grieco. They had run out of money and the family was leaving, so he flew down to provide additional camera. I can’t find the clip he used in the presentation so words will have to do.

A child, a boy of eleven, is saying goodbye to his classmates and his teacher weeps. He is stunned and overwhelmed, stiff shouldered and resigned, and walks alone out of the room full of children. The room is battered and almost empty of resources, but it glows with feeling.

‘I love that clip. It’s one of my favourite all time clips, because in 90 seconds, it tells you what the theme of The New Americans was, which is we need to understand what these people have left behind. And there’s a lot of subtle things and it’s, again, I think the wonder of documentary filmmaking. You don’t have to say a word. You look at that school in this very poor rural part of Mexico. You understand there’s something about you being in that classroom with a teacher. And that’s, it’s those kind of images that moved me so much in documentary filmmaking.’

The long story of verite is odder than anyone thought at the beginning. In some ways the claims about true life led us to reality television, the joys of stickybeaking and public humiliation.The difficulties of using spontaneous behaviour to tell stories mutated the form with fake hysteria and grandiose narration tracks, and star provocateurs who manipulate their subjects in the frame.

But technology and experience and education led us to the ways that verite genuinely, uniquely, engage with deep truth. Stories which start at the beginning and run to the end, that take us into challenging points of view, that are embedded in culture, power and imperialism.

Ninety seconds contemplated and reworked over a two year edit becomes the essence of our times. We live at last in metaphor.

Kartemquin Films has grown with the times and embraced its wild ambitions. It has a succession plan for Gordon Quinn. It has expanded its fundraising efforts to include equity funding and learnt to manage relationships with more corporate people. While the group moves with the times, the role of producer has remained the same.

In a sense,’ says Gordon Quinn, ‘I think I’ve always seen it in a similar way. It’s trying to help a filmmaker get to the heart of the story’.