From Star Wars to Fight Club, can you find all of the cinematic Easter eggs in this list? Better hop to it!
Silvi Vann-Wall 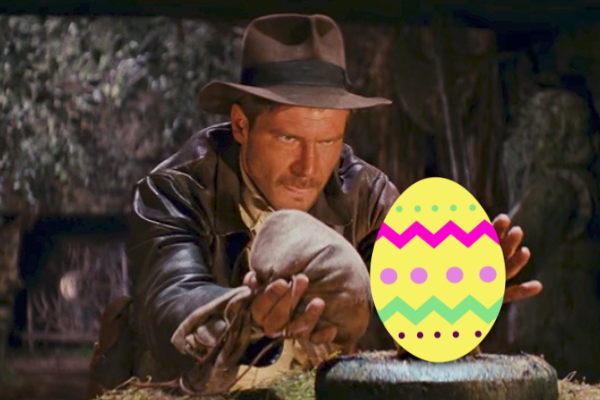 Are Easter Eggs infuriating, or do they enhance your film eggsperience? Image: Canva/ScreenHub

Do you love getting meta about movies? Are you the friend that can’t help but point out every little background detail during a film night? Do purposeful throwbacks in prop & costume design feel like you’ve entered into a private conversation with a film’s director? If you answered yes to any of these, this list is for you.

The concept of the ‘Easter Egg’, that is, a hidden detail intentionally placed into a film for keen-eyed viewers to find and use to improve their nerd-cred, came about in the 70s. Many mis-attribute its origin to a bit of trivia from The Rocky Horror Picture Show set, where cast and crew staged an actual Easter egg hunt but couldn’t find all wayward eggs before shooting was due to start. This led to some chocolate eggs still being visible in the final cut. It’s an interesting story, but not where the term came to be.

The term actually originated from a computer game. In 1979, Atari employee Warren Robinett was uncredited for programming the game Adventure. Not wanting to be forgotten to time, the cunning programmer hid his name in a specific place inside the game that would only be revealed if triggered.

Without further ado, I’d say it’s time to crack open our Easter Egg listicle and feast on the gooey innards.

Do I know you from somewhere?

The most well-known form of Easter egg is the appearance of characters from a film inside a film which is … well, not that one. Let me begin with a few egg-samples:

Quite easy to spot if you’re a Ghibli fanatic, but others might have wondered why this rabbit-owl dude was just hanging out with the rest of the toys in this Pixar classic. It’s actually a crime to not watch My Neighbour Totoro (1988), if you haven’t already.

The droids from Star Wars make an anachronistic appearance in the form of some temple hieroglyphs in Indiana Jones and the Raiders of the Lost Ark. This cameo comes courtesy of George Lucas’s attachment to both films.

After Agent Nick Fury’s ‘death’, he can be seen standing in front of his character’s grave, where the headstone reads: ‘The path of the righteous man … Ezekiel 25:17’. This is a direct reference to the trademark speech of Jules Winnfield in Quentin Tarantino’s Pulp Fiction (1994). The connection, of course, is that Samuel L Jackson played both characters.

The director cameo or: ‘ego eggos’

Ah, directors. As if putting their name first in the credits wasn’t enough, some just have to go out of their way to steal the thunder on-screen. Here’s some famous examples, starting with one that pre-dates the term ‘Easter egg’.

Alfred Hitchcock appears briefly in (almost) all his films. The director’s cameos include a clockwinder in Rear Window, and a man in a newspaper ad in Lifeboat. He became so renowned for doing this that in his later films he made sure to place the cameo early on, so the audience looking out for him would then focus on the film.

M. Night Shyamalan has also had small roles in all but three of his mind-bending movies. You can usually spot him if you know what to look for – but in The Happening he provides brief voice work only, making it extra difficult to find him. What a twist!

Peter Jackson is yet another director who loves to make blink-and-you’ll-miss-it appearances in his films. The image above is from The Fellowship of the Ring – where Jackson walks into frame eating a carrot. The ability to quickly pause the film on DVD ensured lots of fans caught this one. They even made carrot-eating-man an actual character.

Doesn’t count: directors like Taika Waititi often have significant roles in their films, so spotting them doesn’t count as an Easter Egg. I just wanted to put this picture from Boy (2010) here. It’s a ripper movie.

We all know about shameless product placement in movies. The director needed extra cash, and ACME-pop were willing to give it, as long as the heroes took a long sip of that refreshing soft drink after their big fight or something. But these examples are a little different.

In the Robert Rodriguez directed, Tarantino written film From Dusk Til Dawn (1996), the characters stop at a Hawaiian burger place called Big Kahuna Burger to fuel up. Fans will know this as the fictional fast-food outlet that also appears in Pulp Fiction.

HARD: Venti Mocha With An Extra Pump Of Violence

A Starbucks coffee cup appears somewhere in every scene of David Fincher’s ode to toxic masculinity, Fight Club. Apparently it’s a metaphor. Something about capitalism and consumer culture and how, like, The Man is always getting us addicted to things we don’t, like, need man. Woah.

EXPERT LEVEL: Everything And The Kitchen Sink

Apparently, as an inside joke between VFX workers, an actual kitchen sink was CGI’d into Star Wars Episode III: Revenge of the Sith (2005). As in: ‘we’ve got everything but the kitchen sink!’ It’s a shame the film is so bad that it barely warrants a rewatch, let alone the stop-start dedication needed to catch this minuscule detail.

These next ones could be pure ‘Insider Baseball’ for most viewers, but I think you’re ready to be let into the inner circle. Your geek cred awaits.

This might be my favourite Easter Egg, or at least the one that’s guaranteed to turn me into the aforementioned filmus-interruptus every time we watch it. Look! Look! In Back to the Future (1985), 1950s Marty McFly inadvertently knocks down a pine tree at the site of the 1980s Twin Pines mall. When he returns to his present, the local mall is no longer referred to as Twin Pines, but rather Lone Pine. Because the other pine never grew. Oh my god!

Spoiler alert – if you’ve never seen The Departed (2006), this next bit may ruin it for you. Director Martin Scorsese is well known for being a cinephile, so much so that he paid homage in The Departed to a motif in the 1932 gangster film Scarface (that’s not the Al Pacino one) by framing shots with X’s in them to signify that characters were going to die. It’s not just a matter of adding an X in post production – the filming locations were sought out for their subtle crosses built into the architecture.

Okay nerds. This one is for the die-hards only. In Thor: Ragnarok (2017), during the play scene in which actors re-enact key moments in Thor and Loki’s life, it’s mentioned that Loki once turned his brother into a frog. This isn’t just a throw-away gag: it’s actually a reference to Throg, wielder of the mighty Frogjolnir, a Thor/frog hybrid who first appeared in the comic Thor #364 in 1986. Yeah, I know. I’m not jumping out of my seat to find this one either.