Development: can you be replaced by an algorithm?

Screen Queensland engages with Story DNA Machine Learning technology to prime an adaptation scheme. How do the humans fit in?
David Tiley 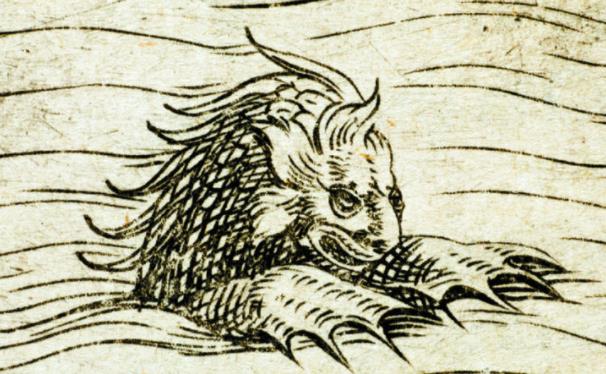 No more scales and fur, we are really afraid of a bunch of numbers. Image: Sea Monster from Gastaldi’s map of Africa in the 1563 edition of Ramusio’s ‘Navigazioni’, f. 261 (in British Library, G.6820)

Screen Queensland regards itself as an innovative agency and sensitive to diversity.  In pursuit of these ideals, Jo Dillon, the Executive Vice-president Content accidentally met Aron Levitz, the Head of Toronto company Wattpad Studios at Content London, a marketplace for ideas and projects.

Levitz introduced her to the remarkable concept of algorithmic script development.

It starts with self publishing

Any screen work on the internet accumulates a huge amount of data about audience – where they are, who they are, what else they watch, where they start and stop, whether they come back.. but none of it is available to producers. Even worse, the data is no direct use because the decisions it could influence occurred a long time earlier.

Wattpad is a platform for self-publishing writers. It claims 80 million users who will find free books from enthusiasts, and paid books which have status, reading for a total of 23 billion minutes a month in fifty languages. 85% of traffic is on mobile devices, 70% are female and 80% are known to be millennials or Gen Z. There are 665 million story uploads.

Once you are reading, the system is tracking what you do. What is more, you can contribute notes, about favourite characters, quality of writing, boring storylines, arguments about dumb bits and praise for meaningful moments. The property travels in a cushion of information about the reader.

Wattpad is in the perfect position to get entrepreneurial about this lovely clump of intellectual property. It sells books to major print publishers, runs awards, advertises successful titles, builds careers in longer deals, and sells to studios for adaptation.

Particularly for young adult and genre work, this is claimed to be a valuable way into publishing without agencies, managers and all that pitiful begging. This does not absolve writers from getting their own advice and being hard-headed. Beyond that first ripple, writers will need the traditional protections.

Eventually the company decided to share in the ultimate success of these packages, and built Wattpad Books and Wattpad Studios. They have around fifty deals with studios, while the two Kissing Booth projects, Light as a Feather and After are star attractions.

And turned into a studio

According to Jo Dillon, ‘We are going to provide Queensland writers with stories that have been successful on the Wattpad platform and already have this inbuilt audience, and we have  identified as interesting and exciting properties with potential for screen adaptation.’

The agency is raiding the Wattpad lolly jar. ‘Then we are asking Queensland creatives to submit any original idea to best interpret that story, and demonstrates their vision for that adaptation.

‘From that, we’re going to select three concepts and they are going to be developed more fully.’

To that stage, the use of data is fairly simple. What has traction, who is the demographic, what excited words are the readers using. But Wattpad is using what it calls a ‘Story DNA Machine Learning technology’ which is more than data accretion.  For a start, the algorithm is fed classic books so that it can analyse and compare modern tests.

I asked Aron Levitz to explain.

‘Our content strategy starts with what we call our story DNA program. It’s a combination of looking at audience insights and data, which finds the fastest growing stories, the most engaged stories and maybe the most read stories.

‘But on top of that we add machine learning which allows us to really understand contextually what the stories are about. So whether it’s understanding how well written a story is compared to other top stories on bookshelves everywhere, or understanding some of the emotional ups and downs or key topics that are really intriguing audiences.

‘When we mix those two pieces together, we find really powerful stories with amazing built in audiences.’

They have an International team with strong backgrounds in development, who then work with the traditional analytical tools. But the Story DNA information is actively used in the writing room to keep each project anchored to its engagement points.

The data also provides a deep mesh of cultural information and regional desire. ‘Some of the interesting data we look at is geographical. We might find that the second most read country for an English story is Indonesia. And the the third most read country is Germany. It’s showing us a map for interesting coproductions, for places where there are built In audiences.’

How fast can genres breed?

They are true genre and region junkies, who have identified a thousand sub genres.

‘We have genres, sub genres and sub sub genres that you’ve never thought of before. It’s really one of the most fun parts of our content team when someone will put up their hand and go, hey has anyone heard that this is happening over here, and we’ll all rush and start reading a story that we didn’t even know was important.

‘Ah, werewolves who speak Spanish and live on the moon. Okay. But, you know, we’re always discovering new content and it’s because of audiences, because they start reading something. It’s because a writer wrote something they thought was important or they didn’t see represented in media today, a story world that was missing in our universe and audiences found it and were drawn to it. When we find sub genre 1001, that is really one of the most exciting moments.’

According to Screen Queensland, the deal works like this:

The best outcome, of course, is to make the project in Queensland.

I could not leave the conversation without asking if Wattpad was learning about the post-COVID future.

‘We saw our reading time go up about 50 per cent  but we saw our writing time up by 150 per cent’, says Aron Levitz. ‘People want to create, they need to connect and Wattpad gives writers and audiences a way to connect through creativity.

‘We definitely saw some cool new genres, but what we really saw was that the big stories got bigger. What people love they read more of so our big romances got bigger, our big fantasies got bigger. It was heartening to bring to the world catharsis and connection even when we are locked behind doors all over the world.’

This interview was done a week ago. Already we are wondering why that statement was in the past tense.