Alex Gibney: ‘My films are meant to be agent provocateurs’

Named one of the world's most important documentary filmmakers, Gibney spoke at AIDC this week and shared the techniques and ethics behind his factual storytelling.
Rochelle Siemienowicz 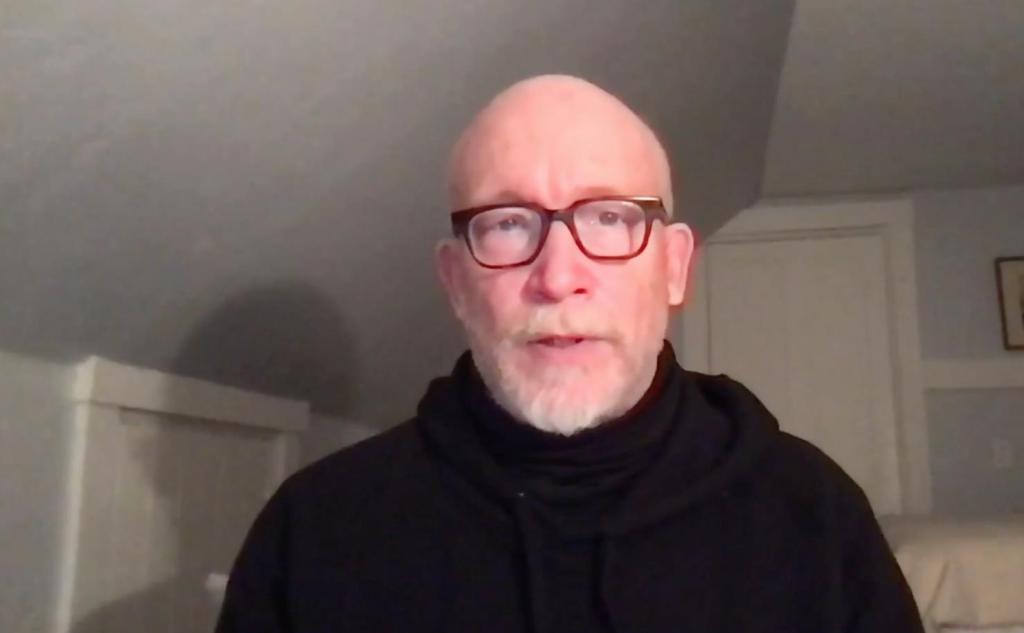 Alex Gibney is the kind of filmmaker who rushes to finish a film in time to influence the US election.

That’s what happened with Totally Under Control, made in about five months and fast-tracked to release online in October last year. The film was a startling revelation of ineptitude and corruption in Trump’s handling of the COVID-19 crisis. Even if Gibney was mostly preaching to the choir (and choirs do need good preaching), the film stunned viewers with its clear timelines, insider access and sincerely heartbreaking whistleblower accounts.

Totally Under Control was just the latest of more than 35 films in the director and producer’s award-winning career where he’s worked on some of the biggest stories of our times, from WikiLeaks (We Steal Secrets), to business scandals (Enron: Smartest Guys in the room), military torture (the 2007 Academy Award-winning Taxi to the Dark Side produced with Australia’s Eva Orner), Scientology (Going Clear) and Russian troll farms attacking democracy (Agents of Chaos).

No wonder the AIDC has been trying to get Gibney as guest speaker for years, and finally they cracked it in 2021, though he was only ‘here’ online from his home in Maine.

The discussion began with Gibney talking about making Totally Under Control, which he said he had no business making because he was deep in the four-year production of Agents of Chaos with crews shooting in Russia, Ukraine and London. ‘But in March and April I was so infuriated at the US Federal response to the Coronavirus that I became determined to make a film about it… because I felt in this case a choice for President was a kind of existential choice, and I wanted to convey to millions of people what had happened.’

Fast-tracking producing meant shooting and editing simultaneously around the clock. (Most of his films take between two and five years.)

Due to the pandemic, this project required the creation of a ‘COVID-Cam’ camera package that was delivered to interviewees and able to be operated remotely. ‘We didn’t want to use Zoom because we felt the image quality was too rugged.’ It was ‘complicated and difficult’ but it worked.

I felt in this case a choice for President was a kind of existential choice, and I wanted to convey to millions of people what had happened.’

So how does someone like Alex Gibney experience the news? Does it motivate him to tell stories and change the world? Is he different from the rest of us who merely doomscroll?

‘Look, I’m human. I do a bit of both,’ he admitttd. ‘Just because something is in the news it doesn’t necessarily mean that it’s a worthy story for documentary. But very often I’ve gone into stories that I felt were misunderstood at the time, to try and understand them in a different way.’

Read: How to build the perfect format show: from Gogglebox to Naked Attraction

He gave the example of the Enron film, where people had missed the real story, the human story. ‘Very often in our 24/7 media landscape, we coalesce very quickly on narratives that we think are the right ones and they tend to often not be right. Things tend to be either a little more complex, or sometimes simpler than they initially appear.’

‘I sometimes have a hypothesis, but I’ve learned over time that you have to be willing to recognise when that hypothesis is dead wrong. I think it’s useful to have a point of view, either at the beginning or the end. The trick is in showing how hard it is to come to that point.’

Gibney experienced one of his most dramatic turnarounds during production of the documentary about cyclist Lance Armstrong The Armstrong Lie (2013), which was originally a straight up sports film entitled The Road Back. He was a director for hire on the project, and says he became caught up in the positivity of Armstrong’s cancer survival comeback story, his team of supporters, and his personal charisma.

‘I wanted him to win!’ Then when he admitted to doping, the entire film had to be pulled apart and re-structured. ‘Part of doing that was me investigating my own failings as a documentarian, in terms of having missed some key signs that I probably should have caught because I was too caught up.’

Speaking also of his 2019 Emmy-nominated film The Inventor: Out for Blood in Silicon Valley (about tech billionaire and fraudster Elizabeth Holmes), Gibney said people like Armstrong and Holmes were gifted storytellers of fictional narratives about themselves which they’d almost come to believe. This was part of how they could be so convincing.

Trump, however, was another kettle of fish. ‘Trump is more of a bullshitter than a liar, I think, in the sense that truth is a rather elusive concept for him, and he’ll say whatever comes into his mind that makes him feel good, or what he thinks makes the crowd feel good at that moment. When he says it, he believes it.’

The issue of ‘noble lies’ was also raised, together with evidence that people will tell bigger and badder lies when they believe they’re doing it for a good cause, or in the service of others.

Leaving the audience with a happy ending?

Asked if he felt the need to leave audiences with a sense of optimism or a call to action, Gibney said: ‘That’s a hard question. I don’t believe in a world that’s hopeless, and I do believe in the idea of hope. But also, I don’t believe in phony or fake endings. Nor do I necessarily believe in simple solution-oriented endings.’

He continued: ‘To some extent my films are meant to be agent provocateurs for people. They’re meant to reverberate in people’s minds. And over and over again, by recalling certain images and moments of a film, you come, I hope, to see the world in a different way.’

Rather than setting out with a particular agenda (‘that’s more like making commercials’), Gibney said the best films invest in the idea of embracing the contradictions of everyday life, ‘and while they may be targeting abuses of power, doing so in a way that sometimes causes you to understand how we may be part of those very abuses.’

‘I try not to make films that are too simple.’

Pulling the plug rather than endangering subjects was something he’d had to do on a number of occasions and said the safety of the people involved was always paramount to telling the story.

The art of having a good conversation

An audience full of documentary filmmakers of course had questions for Gibney around tricks, techniques and insights. Did he have a special way of structuring interviews?

‘I hesitate to use the word “tricks”.’ he said. ‘And I don’t know that I can see “tells” [where people are obviously lying] but I do see patterns.’ He said his approach is to trust but to verify. ‘I’m not suspicious, I’m just cognisant of the fact that we’re all flawed. And like I said, I’m not a believer in the bad apple theory of humanity, but I do believe in rotten barrels that can turn apples bad.’

Doing deep and extensive research before an interview is an important part of the process. (This hardly needs to be said, and Gibney takes it for granted.’

‘I’m not suspicious, I’m just cognisant of the fact that we’re all flawed. And like I said, I’m not a believer in the bad apple theory of humanity, but I do believe in rotten barrels that can turn apples bad.’

He said he was generally purposely non confrontational, ‘though there are occasions particularly with large public figures where I will need to be slightly more confrontational.’

Some of the worst advice he’d ever been given was to get the interviewee to include the question in their answer, which only resulted in unnatural and stilted conversation. It was far more powerful to have a real dialogue, with give and take.

Part of being a good conversationalist was to ‘suck it up’ when the interviewee made him look bad, which they often did, ridiculing the question or acting offended. ‘I nod, smile and laugh and eat humble pie.’

Short and simple questions are often the best.

Sometimes the best thing to do is not to say anything, and leave long silences unfilled. ‘If there’s a pause, we’re all kind of socially conditioned to fill the silence but silences can be illuminating.’

The serendipity of new footage, and proud moments

Gibney spoke of numerous occasions where the late appearance of pieces of footage or voice tapes (especially with Enron) had radically altered the story he was telling. In the case of The Inventor, Elizabeth Holmes had employed renowned filmmaker Errol Morris to be her own kind of personal filmmaker and poet laureate to aggrandise her career, and these tapes had then fallen into Gibney’s hands.

This kind of serendipity was part of the joy of documentary storytelling and he said the ability to remake the story over and over was one thing he loved about the form. He started his career as an editor, and he obviously still thinks like one, which must be a gift.

Working on numerous projects simultaenously was one way of keeping perspective, especially when dealing with the darkest subject matter and the nastier sides of human nature.

Asked finally about his proudest moments or favourite films, Gibney said Taxi to the Dark Side, because although it was a difficult film to make and about a dark subject (torture), it had ended up being shown as required viewing in army schools ‘and was literally a turning moment and a way of soldiers examining the damage that can be done from torture. It entered a conversation at a sort of essential level and that made me proud, because my dad was an interrogator in World War II in the Navy to Japanese prisoners, and on his deathbed he said I had to make this film.’

‘The other big moment was seeing the tears of joy on the faces of the small group of deaf men who were the heroes of Mea Maxima Culpa [about clerical sex abuse] and the film had empowered them… The film is really about their heroism. That was a big moment for me.’