Three approaches to thriving in Hollywood 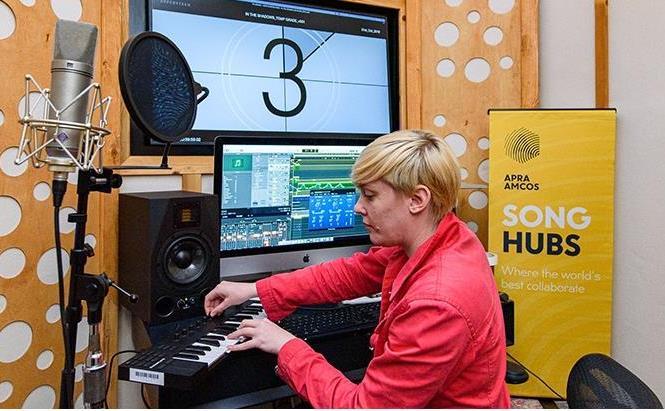 Pru Montin at work on the Song Hubs project.

By running the first Screen SongHubs for Australian composers in Los Angeles, music rights organisation APRA AMCOS created a natural connection point for a bunch of top class young(ish) Australian creatives who are establishing themselves in Hollywood. Here are three different perspectives on the experience.

Ashley Irwin ran the four-day intensive program and selected the participants. Now the President of the Society of Composers and Lyricists in the US, Irwin was already doing well in Australia before he shifted to Hollywood in 1991. He is known for his work on Peter Allen: Not the Boy Next Door, a string of Clint Eastwood films and the hooray intros on a lot of presentation ceremonies. He turned out to be perfect for the Oscars.

‘I was working in episodic television in Australia in the 80s,’ he remembered. This casual line covered a crazed period when he was writing for soapies which demanded extremely fast composing around similar storybeats. At the same time all three commercial networks faced bankruptcy or hostile takeovers.

‘They went into panic mode and cut all the budgets down to next to nothing and they all came to me and said, “Well, you know where we’re taking the budgets so we can no longer have anything expensive on screen. No car chases and no locations and real simple interiors so we are going to need twice as much music to make people think it is still a glossy show.”‘

They were cutting his fees and asking for more, and faster. He had already done some record producing in the US and made friends who invited him to Los Angeles to dig around for opportunities. ‘I thought, Well, my son was just about to start school and if I am gonna do it anytime, uproot the family, I will do it now before we get locked into anything. So that’s what I did, I sort of moved over here and began.’

Even though his contacts were in the record business, he had worked across many niches in Australia because our sector was so much smaller. With the confidence of his local success and his versatility, he prospered. Now he is seeing pretty well one Australian actor in each series, bolstered by their ability to do the accents of the foreign TV which has overwhelmed us in our childhood viewing.

What is more, American crews and creatives who come to Australia make contact with very well trained people who are also more versatile and used to a higher rhythm of work. ‘I know there are people who have been invited to come over based on some sort of production,’ Ashley confirmed. ‘The problem is that there is a brain drain to the Australian industry. They learn their craft well and they depart and not often do they come back.’

One result of the international attraction to Hollywood is that it has little relationship with the rest of America. ‘I worked on the Oscars for years and years. I am about to do my 22nd show. It’s a very compressed production schedule. And it’s really not something you teach someone new to do on the job, everybody’s got to know what they’re doing when they come in. The first year I did the show there were much bigger arrangers and the stuff I did was very incidental. I did a lot of learning and I worked my way up through the ranks.’

‘The few times I haven’t done it, I’ve been out of town or overseas. First of all you realise the time zones are different, and then you realise nobody cares. It starts about fifty miles outside LA.

‘The gossip magazines and all that are just not important to people living in the middle of the country. Even more so with arthouse films. Nobody in Kansas sees Moonlight. Nobody cares about Moonlight.’

Charmaine Bingwa: Heading for the top

Born in Perth to a Zimbabwean family, Charmaine Bingwa studied a Bachelor of Music as a guitarist, singer and songwriter, but collided with a performance course and found her true home. While she kept playing music, she delivered a series of respected theatre performances until she received a Sydney Theatre Award Nomination.

In 2018 she won the Media Entertainment and Arts Alliance scholarship to study theatre in New York, and also the Heath Ledger Scholarship. She is described frequently as the first woman of colour and openly gay recipient. She then created the web series Little Sistas, which won awards.

She is happy in the US. ‘I’m able to breathe in LA because everyone speaks my language.  And it doesn’t sound farcical that I want to direct produce, write, act and compose. It’s very embracing. I love other artists and I need to be around artists in order to breathe. And then it sounds like such a cliche, but being in Hollywood is just like getting the most purest oxygen because the people that are there are the ones that are creating at the highest level. I have deep working relationships that feel very nourishing to me.’

Bingwa is very aware that it takes a village to raise an artist, and feels strongly that LA provides that density. Her natural social life provides a spreading group of people who are also developing projects, hunting for opportunities and looking for like minds. She has a business background as well and is inspired by the Hollywood women who are turning their performance clout into indie production. At the same time she stays close to her theatre practice with private rehearsals and informal play readings.

When she begins to feel drained and worn, she said, ‘I always come back to the work. And to be honest, I have a really rigorous, daily routine that involves meditation and vocal warm ups, physical exercises, and I will go out in nature and go for a hike. So I just kind of do that every day. I find that by doing that I’m less bound by any external, seeing more and less susceptible to bad days.

‘What’s going to get you to keep working is if you have a solid performance on screen, or you know, if you have an amazing script that you’ve written in your hand. Focusing on the work is always the answer to everything.’

Experimental sound designer Pru Montin is a graduate of the composing program at AFTRS. At the moment she is in Los Angeles on a three year visa which commits her solidly to the opportunity.

‘It’s got so that you have to leave home to get recognised in order to be able to come back so I guess I’m in LA because I got opportunities that I haven’t received yet and it really helps me get by.’ She has the Brian May scholarship to complete a Masters of Film Scoring at New York University and won an APRA Professional Development Award.

‘I’m getting a little encouragement and support to be in LA, but I aim to come back as an Australian telling Australian stories and being part of the Australian film industry.’

At the moment she is working with and learning from Hollywood composers on projects which she would not have to chance to access. She finds the culture more collaborative; while she is used to covering all the creative sound work by herself, the US system enables groups of people to work together.

‘When we get a chance everyone gets together. It is hard to do but it’s very productive. You can’t get away from Australians – there is one around every corner. It is collective and supportive and we help each other out on projects.’

But it’s a tough gig. ‘I’ve spent the last two years living in a self-contained storage unit, which is someone’s space to put ten vintage arcade machines. So I have three rows of arcade machines with my studio in the middle. It makes it a creative space and when directors come they love it. It gives me a bit of a profile.’

There is a lot more to Pru Montin than this. She has a respected practice in theatre, dance, film and games, has been recorded by major orchestras and jazz artists. Her Masters of Screen Arts at AFTRS was used to ‘develop an interactive music game myOrchestra, an exploration into creating an environment that uses gesture to compose through the conductor – like control of an orchestra using timbre, structure and dynamics as its main parameters. Pru aims to use music as a means to interact and involve audiences with visual material, using the physics of sound to alter an audience’s awareness of an environment.’