Film: ‘Hearts and Bones’ is warm and human

A richly social film that doesn't lose sight of the darkness beneath a friendship.
Anthony Morris 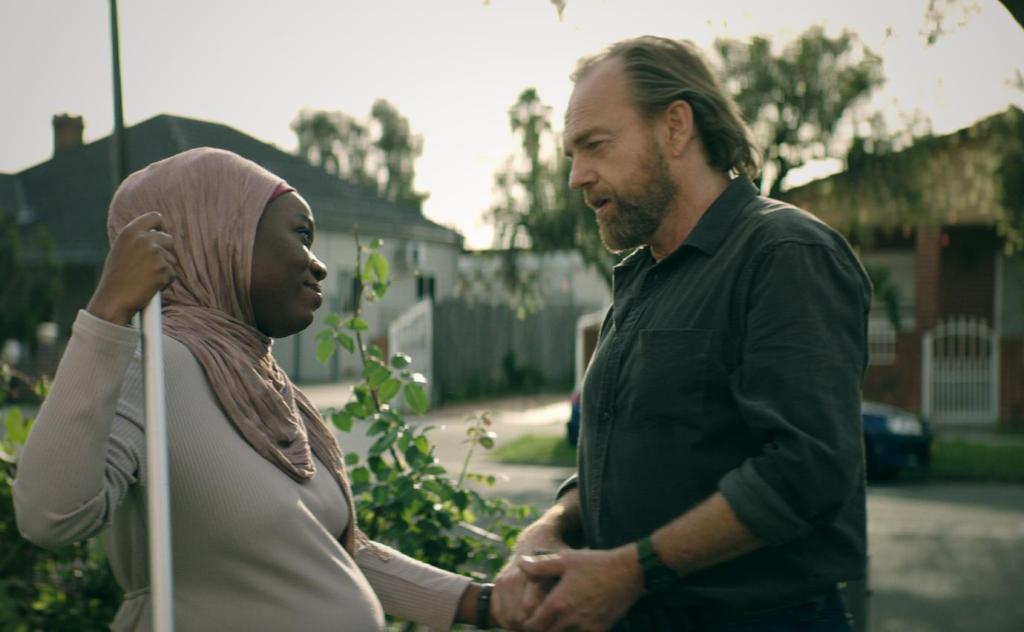 One of the most interesting things a movie can do is show us people. Too often characters are rushed along, racing to get to the good stuff without realising that getting to know the people we’re looking at is the good stuff. It’s no insult to say that the strength of Hearts and Bones lies in the way it’s willing to spend time with its characters. The more we get to know their hearts, the more we know exactly what’s at stake.

Daniel Fisher (Hugo Weaving) is an acclaimed war photographer, which – as a brutal opening scene makes clear – means he’s spent his life throwing himself into danger in warzones around the world. Back home in leafy Sydney, he’s still on edge, especially when his reunion with partner Josie (Hayley McElhinney) has her revealing that she’s pregnant. The resulting argument (which, like much of Daniel’s life, has its roots in a painful past) is interrupted by another unwanted arrival in the form of taxi driver Sebastian (Andrew Luri).

The Sudanese refugee has a slightly unusual request: he says he wants Daniel to photograph the community choir he’s a member of. Daniel isn’t keen, especially as he’s organising a major retrospective of his work. But that’s what connects the pair. Fifteen years ago, Daniel photographed a massacre in South Sudan, where Sebastian’s wife and children were killed. Now that he has a new family with wife Anishka (Bolude Watson) who are unaware of his past, he wants Daniel to keep those photographs out of his show.

It’s soon obvious that there’s more going on here, but the film stretches out and focuses on the growing friendship between the men. There’s more to their bond than shared trauma, and their relationship – along with each man’s connection to his partner – rapidly develops into an examination of shared humanity that’s warm without losing sight of the darkness underneath.

Hugo Weaving is note-perfect here as a brittle, crumbling man, desperate to get back to the conflict he knows so well. Equally impressive is first time actor Luri. His warmth and chemistry with Watson is the perfect contrast to his initial deference towards Weaving, while Watson’s strength with Luri pays off in a later scene where she faces off against a judgemental McElhinney.

Director Ben Lawrence is the son of Jindabyne and Lantana director Ray Lawrence (Ben wrote this script with Jindabyne co-writer Beatrix Christian). There’s a similar focus here on the way people exist within a society – a society that their actions help create and shape – but this film’s focus on a migrant community and their fragile place in Australia gives this a more topical, wide-reaching edge.

Lawrence and cinematographer Hugh Miller present Sydney as a city divided between Daniel’s airy home and leafy inner-city streets and the cramped night-time world Sebastian lives in. A home renovation project positioned as Sebastian’s chance to lift his family up bridges the divide, but it also becomes a scene of conflict as the men’s friendship struggles to deepen beyond their surface optimism.

There’s a sense here that it is possible to move forward, but only after the past is acknowledged and faced down. Sebastian’s renovation may be the most obvious and uplifting symbol of this, but it’s the string of real-life photos of refugees the film ends on that linger. Individuals may be able to find peace, but the processes that tear people apart keep grinding away.


Release: Fast-tracked to digital from 6 May