No one should like what they see in this shocking documentary portrait of racism in Australian sport, says Sarah Ward.
Sarah Ward
[This is archived content and may not display in the originally intended format.] 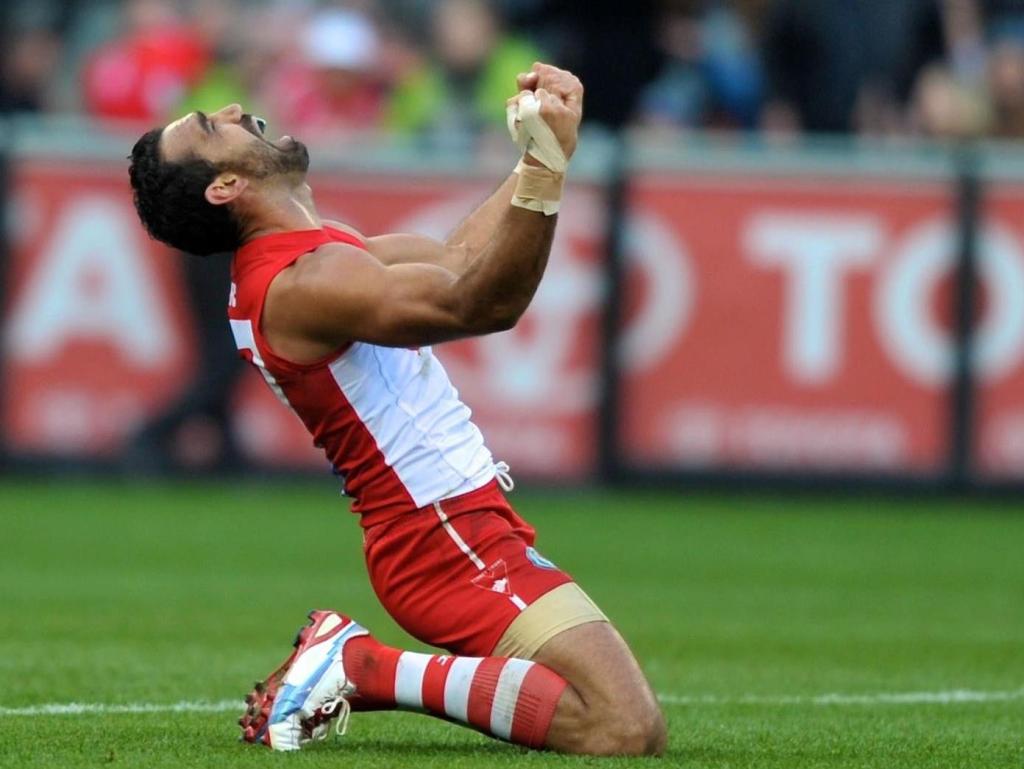 When documentarians compile their features solely from archival footage, it’s for a simple reason: the material speaks for itself. What proved true for one of the great sporting chronicles of the past decade, Asif Kapadia’s Senna, remains the same for Ian Darling’s The Final Quarter — and although they’re very different films, they are equally heart-breaking. For a concise, compelling 75 minutes, this AFL-focused affair presents the experience endured by ex-Sydney Swans footballer, dual Brownlow Medallist, Indigenous games record-holder and Aussie Rules champion Adam Goodes, all by using material captured at the time. News clips and headlines, game footage with accompanying commentary, snippets from the many AFL shows on the airwaves, and vision from press conferences: that’s what fills this film’s frames.

Premiering at the Sydney Film Festival, what a picture The Final Quarter paints; one that — as the archival footage emphasises — all played out in the public eye under the sizeable gaze of both the country’s football media and the popular code’s supporters. Honing in on Goodes’ last three seasons as an AFL player up until his retirement after 372 games in 2015, the film chronicles details and incidents that are common knowledge, and were covered as such at the time; however, condensed into an impassioned compilation, its contents prove stunning to revisit.

When Goodes spoke out against racial vilification during a 2013 game between Sydney and Collingwood, reacting after being called an ape by a teenage girl, public opinion turned against the celebrated Indigenous player. When he spoke eloquently about the need to stamp out racism in all facets of Australian life, and to teach children more inclusive ideals, it was interpreted as an attack on the nation by inflammatory conservative pundits. When he celebrated his Aboriginal heritage on the field with a spirited traditional war jig after kicking a goal, in the competition’s dedicated Indigenous round no less, he was lambasted for being too confronting. And when he was mercilessly booed whenever he took possession of the ball over the course of more than a season — and even accused of staging for free kicks — he was told to grin and bear it.

Seamlessly stitched together, there’s little overt artistry to the way Darling and his editor Sally Fryer amass their footage, other than the enormous act of whittling a cavalcade of material into a such an emotional rollercoaster ride. What The Final Quarter boasts in spades instead is an engulfing rhythm. Music fuelled the pair’s last collaboration, Paul Kelly — Stories of Me, after all. With each new name-calling rant from the mouths of Sam Newman, Andrew Bolt, Alan Jones, Miranda Devine and the like, pleas for it to all wash over from ex-AFL players turned coaches and commentators such as Nathan Buckley and Dermott Brereton, and oblivious statements from the saga’s opposing mouthpiece, Eddie McGuire, the effect is purposefully cumulative. If it’s overwhelming, shocking and infuriating to watch now, that’s a mere fraction of the frustration that Goodes must have been feeling.

It’s a testament to Australia’s filmmakers, their focus and their recent cinematic output that the word ‘important’ keeps being bandied. Sexuality, gender, diversity, multiculturalism and race sit at the heart of movies as varied as Maya Newall’s documentaries Gayby Baby and In My Blood It Runs, rom-coms Ali’s Wedding and Top End Wedding, Ivan Sen’s crime efforts Mystery Road and Goldstone, and consecutive Venice-premiering dramas Sweet Country and The Nightingale, to name just a few — and with features such as Slam and Hearts and Bones also on this year’s Sydney Film Festival program, the welcome trend is set to continue. Although its sporting basis may seem to set it apart from the above titles, The Final Quarter belongs in the same company. As a potent portrait of Australia’s persistent difficulties with anything beyond the prevailing status quo, it adds to an essential body of work.

Indeed, putting viewers into Goodes’ shoes is only part of The Final Quarter’s aim. Also on the documentary’s firm agenda is broadening the conversation about race both within the AFL and throughout the country. That’s also the case with the second film about the 2014 Australian of the Year that’s set to reach Australian screens this year, with the Stan Grant-written The Australian Dream opening the Melbourne International Film Festival in August. It’s a vital discussion, and one that The Final Quarter shines a light on in the most illuminating fashion: by reflecting the grim reality back at the nation, and hoping that if the we couldn’t see the truth when it was playing out in front of us, we can recognise it when we stare in the mirror.

That may appear a tad optimistic for a film that recounts such a bleak chapter of history from less than five years ago. But thoughtfulness and aspiration have always marked Goodes’ comments about race and culture — and about his attacks from fans and specific public figures alike — with Darling following in his subject’s footsteps. Goodes wasn’t an active participant in The Final Quarter, but in telling his story, the documentary has taken his approach to heart.

Still, when The Final Quarter premiered mere hours after the AFL and its 18 clubs finally issued an unreserved apology for their lack of action during Goodes’ career, it also sparked a hollow feeling — especially for anyone who attended a game circa 2014–15 and heard the ceaseless booing directed towards Goodes, as well as the weak justifications murmured throughout the crowd. It shouldn’t have taken the film’s impending debut to inspire the AFL to speak out four years later, as The Final Quarter’s contents couldn’t make more apparent, but Australia’s major sporting code can have a memory shorter than a goldfish.

At the very same time as Darling and his team were taking to the Sydney Film Festival stage, with much of the football community gathered in the State Theatre around them, booing was thrust into the spotlight again during a match between Geelong and Richmond. Columns and commentary have flown thick and fast throughout 2019, as have calls to ban the practice, all thanks to the latest target of audience disapproval: Gary Ablett Jr. It was after the fellow dual Brownlow winner’s support of Israel Folau’s offensive homophobic Instagram post that AFL fans began to get particularly vocal towards Ablett — and, if the top-down reaction is any guide, voicing displeasure at a player liking an image with offensive views is apparently more worthy of action than offensive behaviour itself. A similarly mixed message was sent a week earlier, when private school boys took to the field during a game between Brisbane and Hawthorn, unleashed their own war cry, and were widely celebrated for their lively performance.

All of this comes during the first half of the 2019 AFL season in which, as become all too common, Indigenous players have once again been subject to taunts and trolling — making The Final Quarter, and the stark reminder it offers in its archival assemblage, all the more crucial. No one should like what they see when they watch this film. No one should forget that it’s the absolute truth in a code and a country still visibly struggling with race, either.