Making a rare on-screen appearance, Clint Eastwood directs and stars in this wistful tale of an elderly drug courier.
Sarah Ward
[This is archived content and may not display in the originally intended format.] 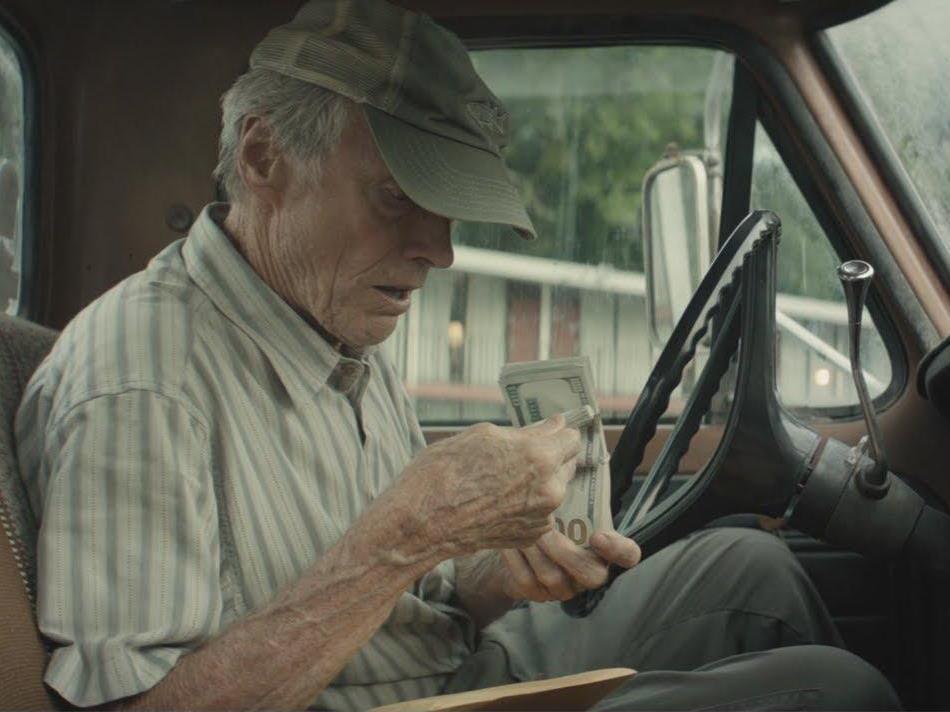 Clint Eastwood in The Mule.

Nearly seven decades into his screen career at age of 88, Clint Eastwood has amassed much to look back on. The typical target in his rear-view mirror in recent years: his country. Since the turn of the century, a wistfulness has seeped into the still-prolific director’s films, both good and bad, and whether he’s setting his features in the past or the present. Infused into the likes of Flags of Our Fathers, Gran Torino, Jersey Boys, Sully and now The Mule is a reminder of the traits, values and people that once comprised the fabric of everyday American life, as well as a clear sense of longing for their return. In The Mule’s case, also evident is a dislike of technology and the change it represents.

Taking his first lead role since 2012’s Trouble with the Curve and acting in his own work for the first time since 2008, Eastwood plays horticulturalist Earl Stone. More than once during The Mule’s 116-minute length, he rallies against today’s always-online times. The movie’s closest version of a young Eastwood – aka Bradley Cooper’s (A Star Is Born) DEA Agent Colin Bates – also comments about someone being glued to their mobile phone, then is later admonished by his older counterpart for doing the same. Even if such statements didn’t appear with noticeable frequency, they’d encapsulate the flavour of the film, with The Mule brandishing an analogue feel in a digital world. America once hailed family, community and decency as its core principles, it posits, but in our virtually-connected, physically-disconnected contemporary lives, that’s no longer accurate.

Introduced in 2005 as a rock star of the daylily circuit, Earl has spent more time with his flowers than his family. Case in point: after complaining about the internet and winning an award at a convention, he chooses celebrating with his pals over walking his daughter (Alison Eastwood, TV’s The Trouble) down the aisle. Twelve years later, his disdain for online commerce has seen his business fail and the bank threaten foreclosure on his home, while his focus on professional over personal matters has left the octogenarian with no one to turn to. Then, at a pre-wedding party for his granddaughter Ginny (Taissa Farmiga, The Nun), he’s approached by a Latino guest with a proposition. Earl has spent his life on the road – now he can get paid handsomely to simply drive.

The nature of the character’s new job is right there in The Mule’s title, and the film’s narrative follows just as expected a path. With bills piling up, the old man steps into a ruthless realm to earn a living, tries to ingratiate himself back into his family’s good graces (including Sisters’ Dianne Wiest as his long-suffering ex-wife), and slowly comes into the purview of Bates, his partner (Michael Peña, Narcos: Mexico) and his boss (Laurence Fishburne, Black-ish). The film marks Earl’s drug runs by number, building tension one by one as viewers wait for his worlds to collide. What it does more forcefully, however, is cast Earl as a relic of a simpler, happier, nicer time.

Engagingly acting his age – competent, capable and even spry, but visibly past his prime to the point of looking frail –Eastwood’s Earl is painted as a good man who has made mistakes, but has typically done his best in difficult situations. He didn’t abandon his loved ones, but worked tirelessly to support them. He isn’t the world’s most unlikely smuggler, but a man trying to help those around him. On his road trips, he sings along to Dean Martin, stops for pulled pork sandwiches and assists an African-American couple with a flat tyre. In his criminal gig, he asks his Mexican handlers about their families, vouches for them to racist small-town cops and gives one fatherly advice. In short: he’s far from perfect (complete with antiquated racial terms in his vocabulary to prove it), but he’s better than the uncaring, cutthroat world he’s forced to live in – or so Eastwood wants audiences to believe.

Scripted by Gran Torino screenwriter Nick Schenk, Earl’s story has a history. It’s based on New York Times article ‘The Sinaloa Cartel’s 90-Year-Old Drug Mule’, which itself recounts the true tale of World War II veteran turned elderly drug courier Leo Sharp. Alas, in endeavouring to balance its flawed protagonist with the deep-seated flaws of modern-day life, the film can never quite find steady ground – even though it would rather remain slow and steady than vivid and memorable in everything from its pace to its plot to its performances. If the constant digs at technology didn’t make it plain, then the leisurely, scenic imagery by cinematographer Yves Bélanger (Sharp Objects) does, with soaking in the old and the enduring, and championing it over the new and adapting, The Mule’s aim. So is grappling with regrets, and while Eastwood lets his screen surrogate try to redress past wrongs, the filmmaker appears most remorseful about the current state of his country.