Danish actor Mads Mikkelson is a true star; they know it in Scandinavia and we're now convinced of it here.
Liza Dezfouli
[This is archived content and may not display in the originally intended format.] 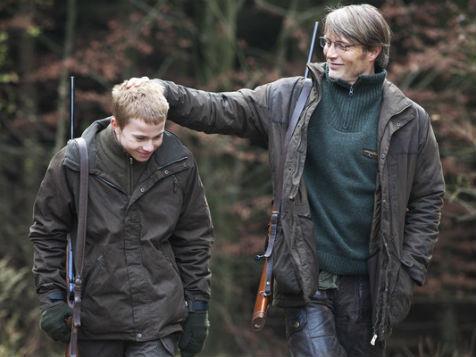 Hollywood has already recognised his talent. The Hunt, a Danish film by Thomas Vinterberg, sees Mikkelson playing a quietly loving man, Lucas, a role splendidly economical in dialogue yet which creates a gigantic sense of character.

A small community in Denmark enjoys closeness, a strong sense of shared lives and masculine camaderie until a little girl, the daughter of Lucas’s best friend, piqued and rebellious, impulsively makes up a story about Lucas, drawing on an image from the cover of a porno video carelessly and stupidly shown to her by her older brother. The consequences of her words involve a harrowing and gutwrenching descent into a world of nightmare for kindergarten teacher Lucas and a sad loss of trust and common sense for the town. The Hunt deals with very tricky subject matter requiring extraordinary sensitivity: children who so often can be victims of exploitation will also say what they think adults expect of them – lie, in other words. Naturally we want to believe them as we know how ill-served children have been (and still are) by adults not taking them seriously.

This picture does not take the viewer by the hand; as the story unfolds much is left assumed. Scenes you’d expect in the hands of a north American director perhaps, are simply left out – the legal processes involving the police, for example. Instead, the film focusses tightly on Lucas’s interior world, remaining sited in the characters’ homes, the village and the forest.  The story details  Lucas’s relationships: with his new girlfriend, with his son, with the locals and the few who stick by him. Lucas is determined to hold his head high yet must change his way of being in the world as a result of how he is victimised. The sense of nobility in his character is finely and beautifully drawn, forcing you into his heart, appreciating his hurt and his fears of how his relationship with his son might be compromised.

The Hunt is a well-made film which (fortunately) doesn’t attempt self-consciously artistic effects or fancy cinematography, but one which makes, as one of its many strengths, effective use of its setting. The hunting culture so taken for granted by the world of the film is startling for urban Australian viewers: although the village men shoot deer as a matter of course during their weekends, no reference is made to eating the venison; we have to hope that they do. There is a semi-formal masculine coming of age ritual near the end where Lucas’s son Marcus is presented with a hunting rifle, a family heirloom, an event which seems parochial to us. We forget, too, how much the church is still the centre of village life in small European communities. A stand-out in the film is a scene in the church at Yuletide, with perfect camera angles lining up an intensely held sightline between Lucas and his former best friend, Theo (Thomas Bo Larssen). This moment, it has to be said, is tearworthy but in no part allows for easy sentimentality – rather it’s a strongly held, powerful scene.

A huge degree of restraint is required to tackle such an emotive and complicated story with respect: in this Vinterberg and Mikkelson make the perfect team. The child, Clara, is played with presence and an apparently natural complexity by seven year old Annika Wedderkop. According to the special feature interviews on the DVD with both Mikkelson and Winterberg, Wedderkop understood the story well, her evident intelligence being robust enough to appreciate its contradictions.

Special features include interviews with Mikkelson and Vinterberg and a theatrical trailer
Running time: 116 minutes
Distributed by Madman Entertainment