Film Review: ‘Zola’ – How to Tell the Story?

Zola is a cautionary glimpse into the prevalence of sex trafficking, wrapped in social media ambience. The result is a mixed blessing, writes Adrian Martin.
Adrian Martin 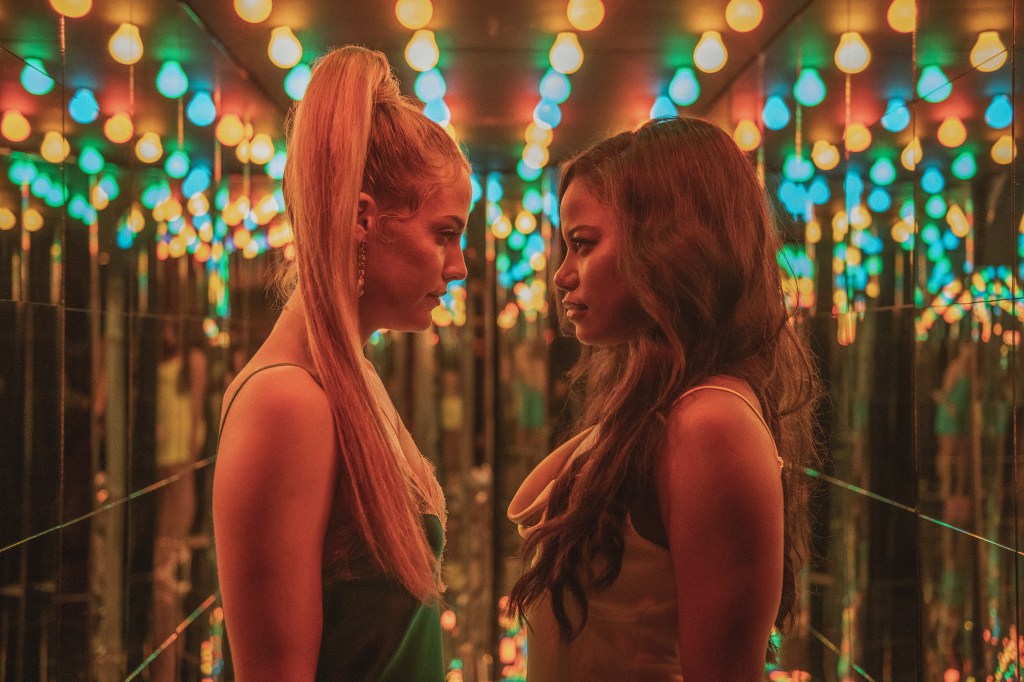 Zola (Taylour Paige) is a proud young woman who likes to strip and dance for a paying public – any opportunity to do so relieves the grinding boredom of her day job as a diner waitress in Detroit. Her chance meeting with the vivacious-cum-hysterical Stefani (Riley Keough) sends her off on a sudden work trip to Florida – with the unexpected travel partners of Stefani’s erratic boyfriend, Derrek (Nicholas Braun), and an increasingly menacing figure at first identified only as X (Colman Domingo). Is X Stefani’s secret lover, her dance booking manager… or her pimp? Zola, while steadfastly refusing to engage in prostitution, finds herself caught up in a frantic whirlwind of dangerous events. Guns are brandished, gang rape looms.

The tag that usually accompanies Zola is that it is ‘based on a Twitter thread’ – 148 tweets, to be precise, posted in a narrative sequence by A’Ziah ‘Zola’ King in 2015. That’s certainly where the telling of the story (it even became known as #TheStory) began, and the film sticks to it fairly faithfully – while tossing off the clever on-screen disclaimer that ‘most of what follows is true.’ As it happens, the social media mania around this tale didn’t ignite immediately – King admits she had to post it several times before it gained major celebrity endorsements (including singer Missy Elliot and filmmaker Ava DuVernay).

The next major telling of the tale occurred near the end of 2015, when David Kushner picked it up for Rolling Stone magazine. This piece presents itself as an investigation into the ‘real story’ – duly noting the discrepancies and contradictions between the accounts of the various participants (or, at least, those who would agree to be interviewed). In it, King admits she may have juiced up some details for the purpose of greater entertainment value, and that, once it got rolling online, she was ‘riffing on the reactions of her followers who responded in real time’. Typical ‘auto-fiction’ creative license! But the essential veracity of the story is upheld.

More significant than the journalistic establishing of truth value, however, is the moral and political load that Kushner freighted onto Zola’s narrative. For him – and for the society at large, as he solemnly implies – Zola’s experience is a cautionary glimpse into the prevalence of sex trafficking, and how women are lured, tricked and trapped into its hellish cycle. I think it is fair to say that King’s original tweets reflect very little general awareness of this aspect, beyond what was immediately occurring to her; this ‘reading’ arrived after the fact, and King was thereafter happy to amplify it. The tone of her tweets is resolute: this is fun, this is crazy, to live through it was a bit scary, but (as her cap-off states) ‘If u stuck wit that whole story you are hilarious lol’.

Janicza Bravo’s film version (it is her second feature), co-written with playwright Jeremy O. Harris, inherits these diverse viewpoints, and tries to juggle them – not always successfully, in my view. Equally, it tries to forge a path through the different ways in which Zola’s story could be told cinematically: as a straightforward thriller-action plot, with or without a social conscience; in a mimicry of unfolding social media activity (the sound of Twitter notifications and animated love-hearts are constantly superimposed on events); as a Sundance-style humanist testimony to one woman’s strength and resilience in a tough situation; as a celebration of (to use Zola’s own proud self-description) ‘hoeism’; and, finally, as a flipped-out, amoral piece of contemporary surrealism in the recent tradition inaugurated by Harmony Korine’s Spring Breakers (2012).

If that stew doesn’t seem to you like a good recipe for dramatic coherence – for coherence of any kind – you would be absolutely correct. Zola is the type of movie that viewers float through, occasionally grabbing for this or that island of meaning, characterisation or topicality. Some reviewers have yoked it to a relatively recent sub-genre of movies about life in contemporary Florida (such as Moonlight and Waves) – under the terrible label of ‘Tampa-core’, thus connecting it to the American independent movement of Mumblecore. But the real precedent in this field is Abel Ferrara’s little-seen, extraordinary The Blackout (1997), in which the anti-hero’s consciousness swiftly disintegrates under the bombardment of every kind of hyper-stimulation.

As we watch Zola, we may wonder less about how ‘real’ it is, than about how seriously we are meant to be taking it. Sometimes the atmosphere of threat that Zola faces seems genuine, and at other moments it’s as light as a feather – even the original Twitter thread includes jokes about the importance of spending a bit of quality time in the sun, no matter what life-and-death situation is going down. The recourse to madcap comedy hi-jinx does not always serve the film well: to get out of a bad clinch, just run fast! Even more vexingly, the central character’s psychology indomitably remains something of an enigma: Zola ping-pongs, in a split second, from righteous declarations of the need for female self-respect, to shoulder-shrugging acquiescence as appointed manager/minder of Stefani’s prostitution appointments. Hoeism, it seems, is a slippery moral slope.

Or is it? It can be argued that Zola tackles a modern world in which amorality (doing whatever you have to do in order to survive) and/or alienation (not being sure what it is you really think or feel about anything) are rife. That puts it in a continuum with films set beyond Florida, including Sofia Coppola’s true-life, rich-kid crime tale The Bling Ring (2013) and, further back, Tim Hunter’s great River’s Edge (1986). Both of these prevalent states of contemporary life, the amoral and the alienated, blend into (and are partly triggered by) a technological, pop culture environment that has only become more intense in the age of mobile phones and the Internet.

For screen storytellers, however, these themes can be difficult to handle, and even more difficult to represent. Portraying ‘affectless’ people poses the problem of whether a film should mimic that lack of emotion, or else try to generate emotion (and insight) in another way, from another perspective. This is exactly what the Rolling Stone article did when it appealed to sex trafficking as the key context of Zola’s story. But was that ever Zola’s own understanding as these heady events were happening to her? As a filmmaker, Bravo finds herself stuck awkwardly here between a story related in a breathless ‘present tense’, yet desperately needing some wisdom of mature hindsight.

In this light, the main contribution that Bravo and Harris bring to the material is the biting irony of a racially and culturally black perspective (Bravo replaced James Franco in the director’s seat after sexual misconduct allegations were made against him in 2018.) Many are the scenes in which Zola freezes or rolls her eyes in the midst of the wholesale, surface ‘appropriation’ of black speech and manners by her white travel companions – especially the often grotesque Stefani. (X is a more ambiguous case, since he is revealed to be Abegunde Olawale, a Nigerian.) Again, I think it’s correct to say that the original tweets made virtually nothing of this cultural gap between black and white. It’s another layer of interpretation, of significance, that has been added on – and hence floats unsteadily, like every other ingredient in this mix.

As to the social media ambience of Zola, this is a decidedly mixed blessing. We permanently feel the unresolved tension between, on the one hand, imparting a linear, reasonably conventional story and, on the other hand, bearing witness to the image-crazy, discombobulated world of our time. I personally could not bear Spring Breakers – which seemed to me like a ten-minute block of stylistic affectations looped nine times – but at least it had the courage of its loony, post-postmodern convictions. Bravo attempts a compromise manoeuver: whenever she exaggerates the artifice of image and sound treatments (Mica Levi’s inventive music score plays a big part here), it is usually in order to give us access to Zola’s ‘inner life’, her thoughts and emotions. But this, in turn, contradicts the idea that all the characters are, by definition, swimming in the same agitated bubble of social media stimuli.

In this regard, the amateur ‘music video’ staged in the car (to the tune of ‘Hannah Montana’ by Migos) is the film’s painful lowlight, while Bravo’s spirited staging of a ‘response’ to Zola’s narrative posted by Stefani on Reddit – reversing every one of its premises, and posing Stefani herself as the victim – is the undoubted highlight. And just remember: if u stuck wit that whole film you are hilarious lol.