Set in 1950s Australia around the Maralinga A-bomb tests, this satirical thriller from Peter Duncan is entertaining but takes a while to find its feet.
Anthony Morris 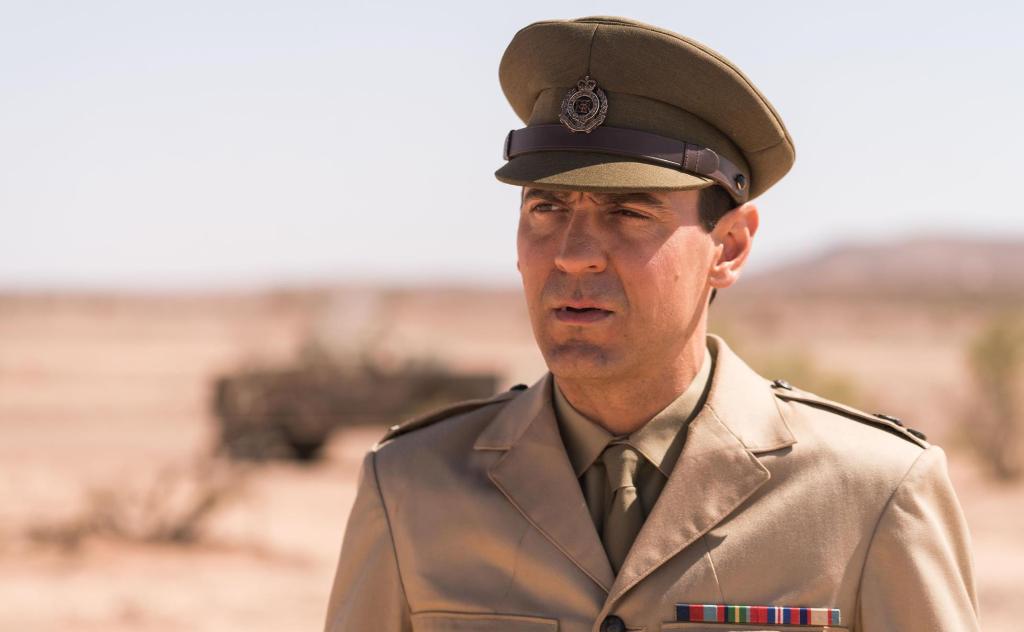 The year is 1956, and the men – well, some of them – of the Maralinga atom bomb testing site have a problem. Having flown in a quartet of sex workers for the enjoyment of a select group of friends, Major Leo Carmichael (Ewen Leslie) discovers one has gone missing, half an hour before their secret flight out. He takes charge of searching the 2000 man camp, while Hilly  (Sam Parsonson) and Murphy (Alexander Bertrand) head out into the desert and Jones (Benedict Wall) keeps the three remaining women under wraps. This is no minor matter. Having unauthorised people on a top secret base is the kind of offense that gets people executed.

The first hurdle comes with a rip-roaring start that the series fumbles. It’s clear the women have to get on a plane, but their status – and the danger they represent – comes to light in a leisurely fashion. It’s not even clear that Leo’s partner Molly (Bojana Novakovic) is a ‘hooker’ (was that term a term in common use in Australia in the mid-50s?), until after Leo has spent minutes chasing down his mates. Letting the audience find their way into a story isn’t a bad thing, but this slow-burn start could have used a bit more urgency, especially as the plot’s main driver is the chaos Leo finds himself tangled up in.

Not only does he have to find the missing woman, but the A-bomb test has been moved up to tomorrow morning, meaning construction on the test tower has to be completed in record time while he also has to deal with the sudden arrival of a range of dignitaries. The Australian Attorney General (Tony Martin) and Defence Minister (Alan Dukes) are coming by truck, while the British High Commissioner (William Zappa) arrives in a plane that he can drive his Rolls Royce out of… not that he has anywhere to drive it to, which is the joke.

Leo is the real power in the camp. His superior, General ‘Cranky’ Crankford (James Cromwell) is largely occupied by uttering the phrase ‘tickety boo.’ The stage is set for a fast-moving comedy of errors, then this A-bomb comedy drops a bombshell. Leo’s former lover and camp nurse Corrine (Adrienne Pickering) reveals that one of the eight women in the camp was kidnapped, raped, and left in the desert to die. She only managed to survive and return through by sheer luck. Now Leo has a possible killer to watch out for.

It’s a jarring tonal shift, though arguably the series needs it. Later episodes take a darker turn as they deal with blackmail, ASIO threats, radiation poisoning and Cranky’s gradual realisation that the supposedly uninhabited test site actually has Aboriginal inhabitants, including local matriarch Ruby (Francis Djulibing). The initial lightweight tone never quite dissipates, but this doesn’t avoid the dark side of Maralinga either.

Even with a large cast to introduce (and not everyone sticking around), it’s still surprising that the series’ main female lead, meteorologist Eva Lloyd-George (Jessica De Gouw) doesn’t make an appearance until the second episode. That said, her delayed entrance gives her a bigger spotlight when she finally does arrive. Striking sparks with Leo, and with some secrets of her own, she’s worth the wait.

If it’s not already clear, occasionally Operation Buffalo’s reach exceeds its grasp. Perhaps a stronger focus on the slightly Rake-ish Leo might have anchored it; as an ensemble, this occasionally feels stretched thin, with characters barely established before our perspective on them shifts. But the numerous story threads are all intriguing, and even an excess of 50s pop culture references (Lolita and The Lord of the Rings and James Bond and Princess Grace?) can’t shake the series’ rock-steady sense of place. Whatever its flaws, it’s never less than entertaining; not every look back at Australia’s past can claim that.