Sharp and sweet, the new Stan series from Kelsey Munro and Claudia Karvan is a quirky teen pregnancy drama in the style of Love My Way and Heartbreak High, writes Mel Campbell.
Mel Campbell 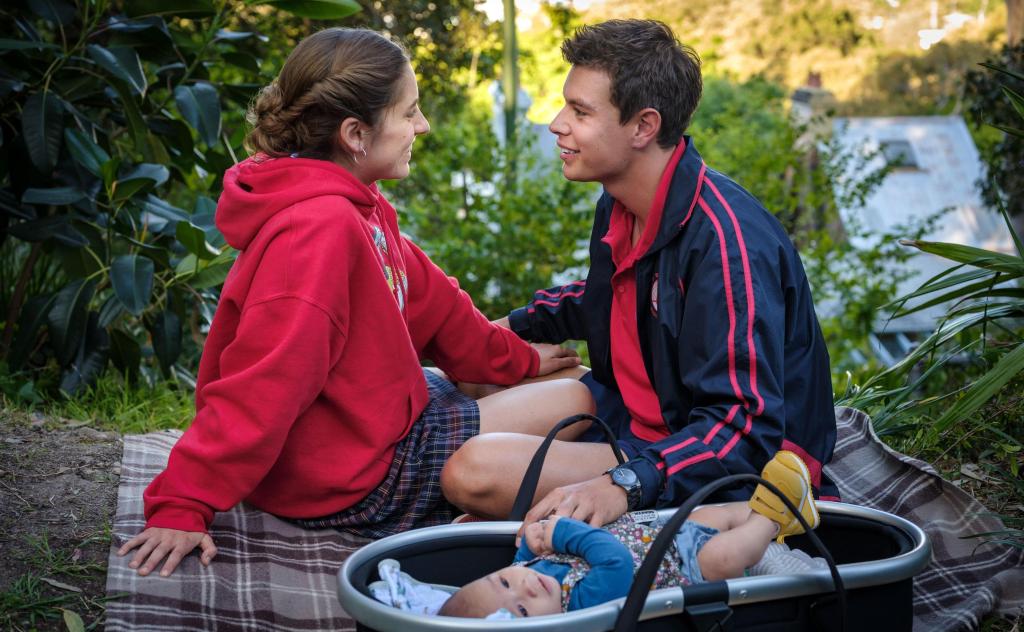 Bump begins a little like Australian television’s answer to Booksmart. Olympia Chalmers-Davis (Nathalie Morris) is 16, in year 11, and a caricature of teenage female ambition. She packs herself fussy, healthy lunches, has a bedroom full of liberal-feminist paraphernalia – a Jacinda Ardern poster; a Malala Yousafzai book – and has her sights set on an Ivy League college, then a career at the United Nations. Her boyfriend Lachie (Peter Thurnwald) is just as driven and dorky, while her best friend Reema (Safia Arain) is a high-school queen bee.

But there’s a bump in Oly’s well-plotted pathway to adulthood. The excruciating pain that seizes her one day at school turns out to be labour. Oly’s having a baby, without ever realising she was pregnant.

Created by Kelsey Munro and Claudia Karvan – and starring Karvan as Oly’s mother, Angie Davis – Stan’s series of ten 30-minute episodes is enjoyably visceral. A blood-filled menstrual cup emerging from between teenage thighs is merely an entrée to the blood and placenta of Oly’s childbirth, her milk-leaking, mastitis-inflamed breasts, and the nightmare of a baby-poo-splosion.

Oly’s post-birth shock and initial refusal to acknowledge her child are also sensitively handled. She’s adamant she’s going to offer it for adoption… but then her Gen-Z self-assurance kicks back in, and she’s confident she can incorporate a baby into her old plans. Of course, it’s not that easy…

For Angie, who teaches at Oly’s high school, becoming a grandmother threatens to trap her in a life she’d hoped to escape. Disgusted that her partner Dom Chalmers (Angus Sampson) has retreated into petulant self-indulgence after losing his job, Angie is having a mid-life crisis of her own: she’s nurturing a heady crush on her colleague Matias Hernandez (Ricardo Scheihing Vasquez), the hunky Chilean-Australian PE teacher and soccer coach.

Another bump in the road? Oly’s babydaddy isn’t nerdy Lachie. It’s Matias’s ‘stoner jock’ son Santiago (Carlos Sanson), with whom Oly had hooked up at a party. In the most satisfying traditions of teen romance, the show makes these very different yet complementary characters circle each other, pulling together and then pushing apart.

Santi’s the kind of respectful dreamboat who stares soulfully at Oly from across the room or the schoolyard, who snuggles her after sex, draws her pictures of herself as a superhero, and instinctively bonds with his daughter. But his yearning for fatherhood is entangled with grief over his mother’s death, and his dad’s swift remarriage to Rosa (Paula Garcia). And he’s erotically entangled with family friend Angel (Catalina Palma Godoy), who’s visiting from Chile on her gap year.

Bump is the first TV show to focus on Australia’s Latin American community, and I enjoyed that the Hernandezes are complex characters, not just Strictly Ballroom-esque exotic helpers for Oly and Angie.

While the show’s tonal shifts between wistful drama and broad comedy are sometimes, well, bumpy, it’s full of nice small touches. I enjoyed Reema’s repertoire of buzzword hairclips and Oly’s debating tournament runner’s up souvenir T-shirt. And for me the funniest line was in a family Zoom chat with Oly’s feckless older brother Bowie (Christian Byers), currently ding-donging abroad in South America: the connection cuts out just as Bowie says, ‘And then the cartels –’.

While US TV series have explored Latinx identities, Bump is the first TV show to focus on Australia’s Latin American community, and I enjoyed that the Hernandezes are complex characters, not just Strictly Ballroom-esque exotic helpers for Oly and Angie. The production takes the challenge of representation seriously: writer Steven Arriagada has an Indigenous Chilean father; Argentinian-born Leticia Cáceres is one of the three directors; and some cast members – including the engaging Scheihing Vasquez – are making their screen debuts.

Refreshingly, the actors share their characters’ nationalities. Sanson, Scheihing Vasquez and Palma Godoy have Chilean backgrounds; Garcia is Columbian; and Claudia de Giusti, who plays Santi’s beloved abuela Bernardita, is from Argentina. It’s great to see Australian TV is running ahead of the United States, where Spanish, Mexican or even Brazilian actors might play Colombian or Chilean characters.

You know what you’re getting with [Karvan]: a quirky relationship drama in a prosperous fantasy version of inner suburbia, unmoored from some social realities while heavy-handedly flagging others.

But is Bump a telenovela? Maybe. To me a more obvious genre is ‘Claudia Karvan urban fantasy’. Karvan’s work on The Secret Life of Us, Love My Way and The Time of Our Lives has basically made her Australian TV’s Diane Keaton, with producer John Edwards as her Nancy Meyers.

You know what you’re getting with her: a quirky relationship drama in a prosperous fantasy version of inner suburbia, unmoored from some social realities while heavy-handedly flagging others. Even her tight-hipped gringa dancing, mocked by Rosa and Angel, has previously been showcased in Warwick Thornton’s The Darkside.

The inner-western Sydney of Bump has the cheerful ethnic diversity of Heartbreak High (a callback to Karvan’s previous role as a hot teacher in The Heartbreak Kid?), but feels prosperous, gentrified. I imagined Angie and Dom as the kind of left-wing parents who believe ideologically in sending their kids to state schools, even though they own a gorgeous house with a leafy courtyard, plus a boat; but then nobody in the show, from any cultural background, seems under any real social or economic pressures. (There’s talk of Lachie’s strict dad, but he doesn’t appear in season 1.)

Yet some pointed moments expose the seams of race. A white cop menaces Santi while he’s driving with Jacinda and Oly, whose whiteness blinds her to the danger of the situation. There’s naked racism in Dom’s attempts to assert his threatened masculinity over Matias. And in an especially fraught scene, Angel slams Oly’s unconsciously smug explanation of the green scarf symbolising Latin American reproductive rights activism.

In Bump, Oly’s baby symbolises emotional entanglements that never quite play out how you wanted. This is a series about the distinction between adolescence and adulthood – a messy line that doesn’t have much to do with age, but about reconciling desire and responsibility. It’s a sweetly satisfying watch for its melodramatic focus on emotions; but it’s sharper and smarter than other Australian dramas that use comedy as a spoonful of sugar to help the woke medicine go down.

A second series is in the works.