More diffuse in focus, this season expands the world of its haunted characters, but maintains a tender truth at its heart.
Mel Campbell 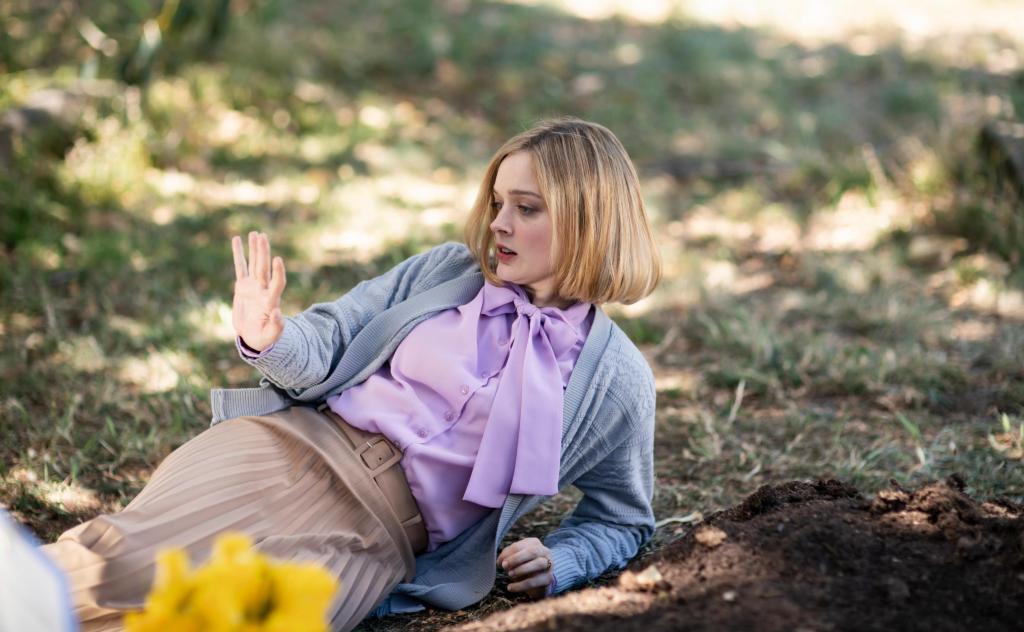 ‘Do you really want to live forever?’ asks the second season of magic-realist Stan Original series Bloom. Most fables exploring eternal youth use vampires as their archetypes; but Bloom is more of a ghost story. Its living characters are haunted by their past; they become magically young in order to resolve and reconcile with what they’ve lost.

While the first season of Bloom was a beguiling, bittersweet fable about regret, its second season is both more thematically ambitious and – perhaps as a result – less focused. It looks gorgeous, thanks to directors Greg McLean and Sian Davies (The Gloaming). Writer (and series creator) Glen Dolman works hard to introduce new characters and explore new terroirs of science and faith, and there’s fun in seeing who’s been cast as the ‘young’ versions of the older actors.

The premise: after five people in the idyllic riverside town of Mullan (the series was filmed in and around Clunes, Victoria) were killed in a flood, a mysterious plant grows wherever they died. When old, infirm people eat its glowing yellow berry, they’re catapulted back into their vital, gorgeous youth… but the effect doesn’t work on everyone, it doesn’t last, and the plant withers immediately when uprooted.

In season two, the berries become rarer and their effects more intense and enigmatic. Consequently, there’s less pathos and more action-packed chasing of the botanical MacGuffin, and the comedy is more prominent and less subtle.

Retired astronomer Ray (Bryan Brown) set the whole star-crossed thing in motion in season one by feeding a berry to his wife Gwen (Jacki Weaver), a once-successful actress rendered catatonic by dementia. She became the babelicious Phoebe Tonkin and, yearning for motherhood, fed a berry to her childhood sweetheart Max (John Stanton) to transform him from an embittered old farmer into delectable babydaddy Sam Reid.

It didn’t last longer than the berry’s effects, unfortunately. Three months on, Ray and Gwen are again each other’s ride-or-die, while poor old Max is enfeebled and sidelined. Gwen, we learn, has eaten the second-generation berry glimpsed in the final moments of season one, and is now more or less permanently youthful. She’s determined to find another berry that will do the same for her craggy husband.

But Ray’s worried that Gwen’s obsession will sap the joy from their marriage. Bloom hadn’t previously used flashbacks, but this season it leans heavily on them to explore Ray’s and Gwen’s courtship (where Ray is played dashingly by Jackson Heywood), and Gwen’s descent into dementia (where much less effort has gone into making Weaver physically resemble Tonkin).

Meanwhile, biotech CEO Anne Carter (Jacqueline McKenzie) has brought her teenage daughter Eva (Ingrid Torelli) and her friend’s obnoxious teen son Luke (Ed Oxenbould) to Mullan as a ‘tree change’. But they clearly know about Gwen and the berry – Anne has hired a botanist, Ben (Christiaan Van Vuuren) to find and propagate the youth-giving plant.

Also new in town is Catholic priest John (Toby Schmitz), a reformed addict who’s keen for a fresh start. When he learns of the berry, he’s determined to claim it for the Church as a miracle… but is he motivated by faith, or by a more secular craving for redemption?

Bloom was always an allegory for the way illicit drugs can tear apart country towns. The characters lolled back in ecstasy as the berry took effect, experienced exhilarating, manic highs, and suffered sweatily through withdrawal, stopping at nothing to get their next fix and to safeguard their stash. This season, Dolman doubles down on the metaphor. Apart from Gwen’s fixation on the berry and John’s junkie past, Ben’s clandestine lab is literally a ‘grow house’.

Unlike other characters, Loris doesn’t relish her returned youth. She’s very much a judgmental old biddy in a gorgeous young body. But rather than challenging Loris to confront her previous moral certainties, this precipitates fish-out-of-water comedy as Loris’s stumbling efforts to reconnect with her daughter (Nadine Garner) and granddaughter (Lucy Barrett) are justifiably rebuffed. I didn’t find her character journey convincing. That said, Heathcote is delightful in the role – especially her vocal performance.

Conversely, comic actor Genevieve Morris gives season two’s most affecting performance, exploring the trauma and loneliness of laconic Mullan police sergeant Rhonda Stokes. All Rhonda’s relationships have failed because she has to care for her feckless alcoholic father, Donnie (Gary Sweet)… and she herself leans on alcohol to cope. When Donnie chomps a berry and becomes chaotic young Oliver Ackland, Rhonda’s life spirals out of her control altogether.

In Bloom, ‘old’ means a range of things. While Ray and Gwen are clearly boomers who were young in the ’70s, Loris and Herb’s values and tastes are those of the Silent Generation, and abused, rageful Farida (Usha Cornish) is in her nineties. Sometimes Bloom wants a character’s age to matter – as Luke’s storyline reveals. But sometimes it doesn’t – Gary Sweet is only a decade older than Genevieve Morris, and they seem more like siblings than father and daughter.

More than last season, Bloom makes the elderly seem expendable – literally most valuable in death. It’s an unsettling proposition in a coronavirus pandemic that has disproportionately killed older people. But Ray’s quiet devotion to Gwen – and Brown’s charismatic central performance – dramatises a good faith that restless souls like John are yet to find. Despite all its narrative busywork, this is the tender truth Bloom first uncovered: that ageing well requires the wisdom to value the relationships that truly matter. When other characters learn this, they shed their illusions of youth like once-trapped ghosts who can now reach heaven.