Sugar gets the Super Size me treatment as Australian actor Damon Gameau turns filmmaker for a cause.
Sarah Ward
[This is archived content and may not display in the originally intended format.] 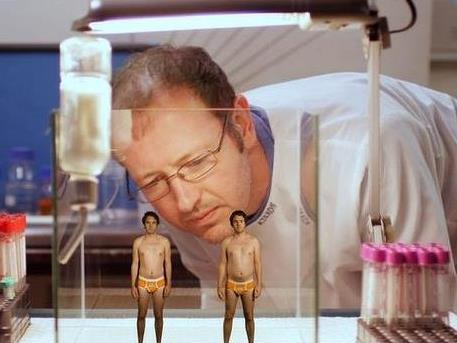 We are what we eat, film has a way of telling us, and not just Soylent Green or Willy Wonka & the Chocolate Factory. A particular strand of documentary filmmaking has narrowed its focus to everyday foods, telling and showing their ill effects. First, Morgan Spurlock dedicated 30 days to eating McDonalds for every meal, climbing to fame courtesy of the success of Super Size Me. Now, Australian actor Damon Gameau (TV’s Secrets & Lies) has turned director and crusader in a war not against fast food or fat, but warning of the perils of sugar.

It is an obvious comparison, and one which That Sugar Film clearly solicits. Indeed, Gameau takes the same approach to his choice of nutritional evil, using his own body as a testing ground. Motivated by the impending birth of his first child and a corresponding need to understand a substance most kids beg to consume more of, he decides to steep himself in the sweet stuff of the refined and lurking-in-more-food-than-you’d-think variety. It’s a significant adjustment for someone who gave up sugar five years earlier to impress his girlfriend, particularly when he has pledged to spending two months ingesting the same 40 teaspoons daily that comprises the average Australian intake. The visual results speak volumes.

Fittingly, the film is presented as easily digestible confection, broken into bite-sized morsels of information and evidence that plead Gameau’s case – an “a spoonful of sugar makes the medicine go down” approach. His assembled team of doctors and experts pop up to offer background data as they track his progress, putting his changes into scientific context, while other talking heads adorn packaging in a stylistic flourish. Comic segments featuring Stephen Fry and actors Hugh Jackman, Brenton Thwaites and Isabel Lucas further relay the anti-sugar titbits, as well as adding star power. It’s an appropriate tactic for the topic, though it doesn’t actually match a diet of lollies, chocolate and ice cream, despite easy assumptions to the contrary. Gameau’s quest comes with a catch: all white granules must be devoured in the products most think are healthy, such as juice, smoothies, yoghurt and ready-made pasta sauces.

Though the actor turned debut filmmaker sits at the centre of the film and makes an engaging subject, it is his forays into other people’s stories that prove the most illuminating. Balancing personality and passion in this style of documentary is a difficult task, and one that Gameau mostly achieves. For all the shiny packaging, That Sugar Film is at its best when it uses real-life case studies – rather than facts and figures, however compelling they may be – to make its point. A pro-sugar scholar offers a lone opposing view, with Gameau given the strongest test of his interviewing skills, but there’s never any doubt that in the feature’s eyes, there’s only one side to this debate.

Of course, where movies like this best succeed is in raising awareness and getting people talking, two feats That Sugar Film easily achieves. After an entertaining, educative and information-packed ride through one man’s commitment to the cause, as composed with enthusiasm and flair, walking out of the cinema with sugar on the brain – and a new way of looking at everyday foodstuffs – is virtually guaranteed.