From Melbourne studio Modern Storyteller, The Forgotten City empowers you with a sense of complete agency, telling a thought-provoking story in a way only games can.
Chris Button 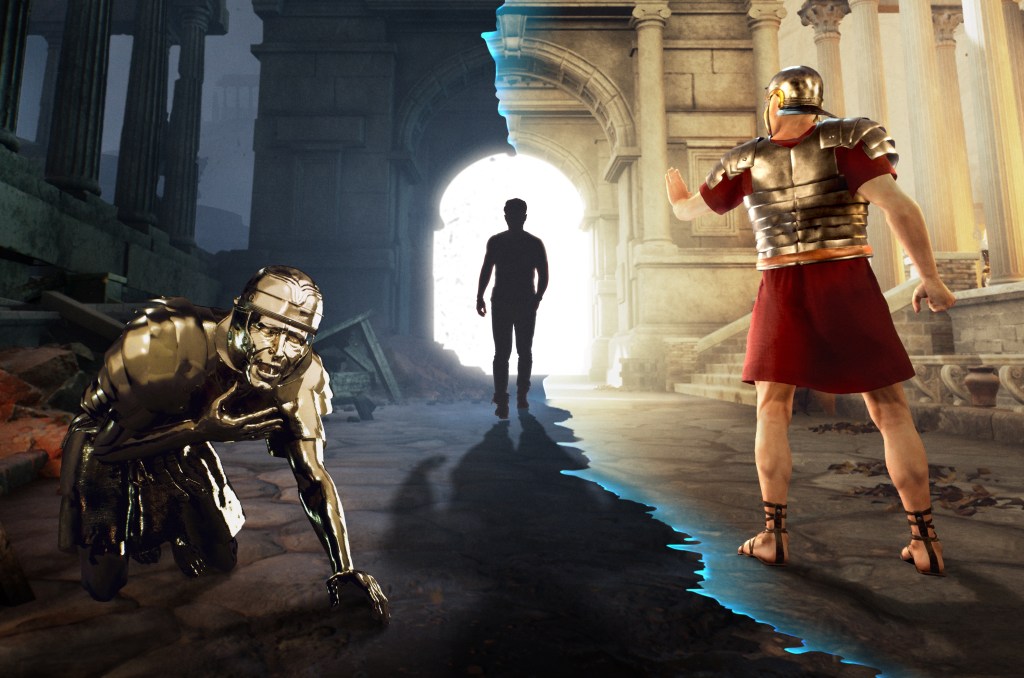 The Forgotten City is a special game. From Melbourne indie studio Modern Storyteller, the time-looping mystery intelligently invites you into its high-concept mythological premise in a way that makes you think and feel in equal measures. Videogames revolving around mysteries are capable of using the medium’s interactivity to draw you in as an active participant, more so than film or television, but some games achieve this far better than others. What The Forgotten City achieves as a mystery and narrative-centric videogame is nothing short of extraordinary.

Originating as a mod for The Elder Scrolls V: Skyrim, The Forgotten City is now a standalone experience set 2,000 years in the past. Your character is transported to an ancient Roman city populated with a curious cast of characters plagued by a common threat: if one person sins, everyone dies. At the moment of sin, mythological sentries activate to encase all citizens in gold. Through a strange ritual you don’t fully understand, however, you loop back to a pre-sin version of the settlement, armed with the knowledge of what happened prior. It’s up to you to prevent everyone’s doom, investigate the source of the curse, and successfully stop the loop.

In practice, protecting everyone and yourself in turn involves a lot of talking to people. Although everything explicitly linking The Forgotten City to Skyrim has been stripped out, how you interact with the world bears many similarities, including conversing with other characters. Conversations – featuring the same Skyrim-style mid-shot framing – require you to pick different dialogue options to uncover clues or potential leads to follow, such as how each character arrived in the city. Each character has their own hidden agendas to be wary of, cleverly expressed in the strong writing and believable performances that gives everyone a unique voice. Even though combat exists in The Forgotten City, your words carry far more weight than any weapon.

By choosing to form allegiances and pursue particular stories, such as getting involved in a local election, you’ll learn valuable information or find important items to aid future loops. With each cycle, The Forgotten City masterfully avoids tedium by incorporating a couple of in-game systems, which are woven into the narrative, that let you bypass having to go over previously completed quests, so you can focus on the next major discovery.

So much work has clearly gone into making The Forgotten City‘s many discoveries and plot reveals feel earned. There is no one correct solution to a problem, nor is there a specific order of operations to follow – save for a couple of item-dependent instances. Although this level of freedom seems overwhelming at first, it’s rare to be stuck with no idea how to progress the story because of the gentle, unobtrusive guidance The Forgotten City provides.

Leads are automatically recorded for you to review at any time, and the eerie golden statues littered around whisper cryptic clues as you explore. The Forgotten City doesn’t adorn its lush environments with a litany of glowing waypoint markers; sometimes you’re pointed in the right direction, but then it’s up to you to concoct a solution. Getting stuck simply means you don’t have enough information yet, which pursuing another lead will likely provide in the meantime.

The Forgotten City‘s twisting narrative is also rich with meaningful examinations into the moral quandaries humanity has pondered for millennia. What does it mean to sin? What is a fair and just punishment for those who threaten a community’s peace? What responsibility should we shoulder for others’ behaviour? With its ancient Roman setting, The Forgotten City encourages you to contemplate your beliefs and values, including how mythology has shaped modern ways of thinking.

Never do you feel lectured or preached to, thanks to the natural manner in which such topics are broached as part of the story’s mysteries. How deeply you choose to engage in such discussions with other characters is entirely up to you, again proving how deftly The Forgotten City handles player choice. Every mystery solved feels like a significant achievement because you’re made to feel as if you did all the hard work.

To weigh in on The Forgotten City‘s multiple endings here – including the self-anointed canonical ending – would be a spoiler-laden shame. Do know, however, that each conclusion conjures as much reflection on your own actions as it does the information presented in-game. I’m still thinking deeply about The Forgotten City‘s events weeks after my original playthrough.

The Forgotten City overwhelmingly succeeds on multiple facets. On one front, it dares to tell a mature, thought-provoking story in a fantastical setting grounded in realism, all without hubris. By far its biggest success is the way it makes you an active participant in its detailed digital world, instead of being relegated to a passive bystander with the veneer of interactivity. Above all else, The Forgotten City is a grand example of the kind of storytelling power video games can have.

A copy of The Forgotten City was provided for the purposes of this review.