Film Review: The Wild Top End is a 3D expedition worth taking

Nick Robinson's latest environmental documentary puts the iMax screen to stunning use as it celebrates the Australian landscape.
Glenn Dunks 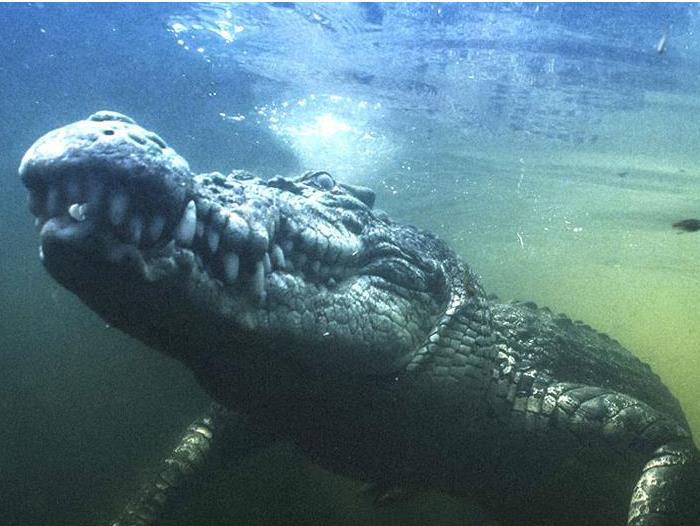 It’s rare to visit an IMAX cinema at night and see a crowd eagerly taking their seats and sliding on their 3D glasses not for the latest Marvel movie, but instead a 45-minute nature documentary. The film is Australia: The Wild Top End 3D, directed by Nick Robinson, which premiered at the Melbourne International Film Festival in August 2019 and is now getting a specialty theatrical release.

Unofficially subtitled ‘A little crocodile’s big adventure’, this eye-popping doc frames itself around the life cycle of a saltwater crocodile, using that saltie to navigate the rivers, creeks, billabongs and coastal shores of Australia’s remote north, some of the oldest landscape in the world. The film doesn’t reinvent the non-fiction wheel, but it does stand out among an already impressive year for local documentaries.

It almost goes without saying that The Wild Top End is a visual beauty. After all, Robinson is an AACTA Award-winning and Emmy-nominated (both for Life on the Reef) cinematographer and filmmaker. Working alongside Caspar Mazzotti and underwater photographer Jon Shaw (who also filmed Turtle Odyssey 3D for IMAX and the Karina Holden’s excellent 2017 enviro-doc Blue) they have shot in clear 8K. Together, they capture the stunning vistas of Arnhem Land, Cape York and everywhere in between, while also getting up close and personal to momentous natural blessings like the crack of an egg as a crocodile wiggles its way free from the nest, or a shrew-like animal chewing a leaf on the rainforest floor.

The secret weapon in Robinson’s pocket, however, isn’t the sweeping shots of waterfalls cascading over cliff-faces or crocodiles swimming with menace just beneath the calm surface as it stalks its prey. Rather, Australia: The Wild Top End 3D is the last screen appearance of Aboriginal elder and actor Balang T.E Lewis who passed away in 2018. He was responsible for many great performances across decades including Fred Schepisi’s The Chant of Jimmie Blacksmith on through to his memorable late-career comeback in Patrick Hughes’ Red Hill and Ivan Sen’s Goldstone. While the narrative, as much as there is one, revolves around the crocodile, Lewis is our guide. He narrates the film as well as appears on screen, allowing audiences into his home and Country. Despite a career as a dramatic actor, this proves a rather appropriate final performance, telling the story of his home and imparting one last slice of history on its audience.

Glancing at the list of highest grossing Australian documentaries, it is a curious lot: the infamous surfer dudes of Bra Boys, warm-and-fuzzy music teachers in Mrs Carey’s Concert, body positivity in Embrace and the health kicks of That Sugar Film. Given the recurring consternation about Australian box office figures, these documentaries have all garnered some level of attention for cracking through to levels that many lauded and acclaimed dramatic features never could.

Receiving far less notice is that not one, or even two, but three IMAX features rank in the top ten including the top two spots each with mid-seven figure tallies. Nature documentaries, of course, but films that took advantage of the ability to play for years and years at premium prices to hordes of school children and nature buffs. Antarctica, Africa’s Elephant Kingdom and Australia: Land Before Time are just three IMAX titles of many that Australia has had significant financial and creative parts in; our country’s long history of nature documentarians and cinematographers (harking all the way back to the works of Frank Hurley in the 1910s) proving a great breeding ground for this talent.

The Wild Top End hopes to play large-format theatres around the world as well as return engagements in Australia’s scant IMAX venues. A distant path to profitability, but who can complain in this market? The first such film for Wild Pacific Media, I hope The Wild Top End 3D finds an appreciative global audience and not just a local one.

It is perhaps not surprising that we don’t produce them more often given the considerable time and effort it takes to make. The idea of spectacle has somewhat moved on somewhat, too. Cinemagoers need more excuses than ever to stop streaming and go to the movies, resulting in the proliferation of non-IMAX movies screening at IMAX venues, usually action movies and visual effects extravaganzas like The Lion King that can take advantage of the large-scale format, similar to the way to action and sci-fi utilised 70mm in the 1980s to give their theatrical seasons an edge in the age of VHS.

This is what makes Robinson’s film so exciting. Despite its absence of swinging superheroes or automobile explosions, it actually is something worth the price of seeing on a big screen. No matter how good your home cinema set-up is, you can’t beat the awe-inspiring and expansive size of an IMAX screen.