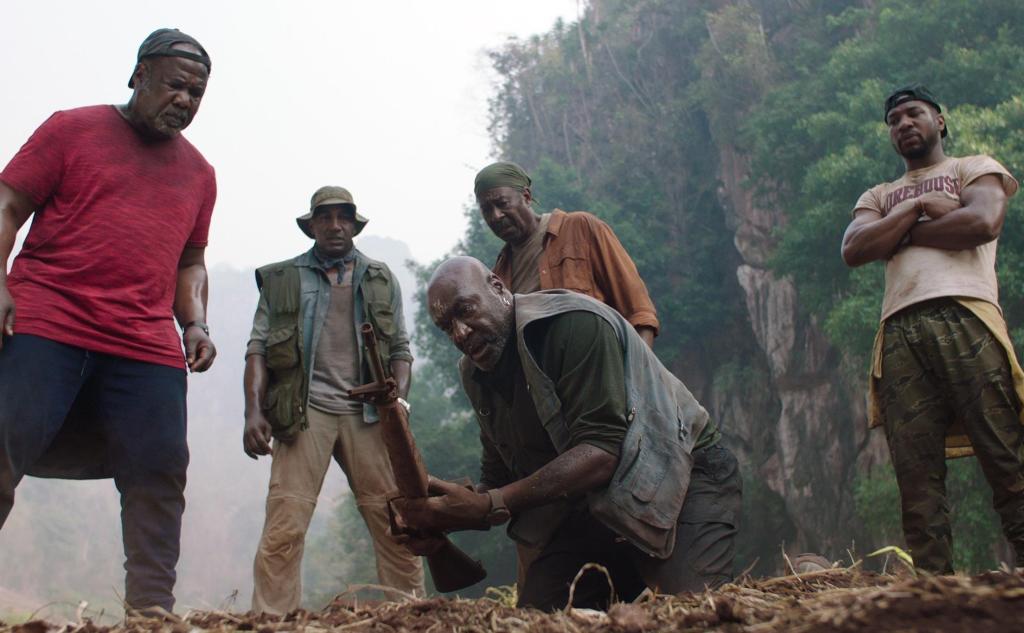 As the United States – and the world – erupts with Black Lives Matter protests, Spike Lee’s new film Da 5 Bloods arrives on Netflix to remind us that historical injustice remains buried in living memory, like illicit gold… or a land mine waiting to explode.

Having already made a WWII movie in Miracle at St Anna (2008), Lee now turns to the long, messy legacy of the Vietnam War, in which young African-American soldiers disproportionately served and died. In the present day, four combat-bonded veterans take a trip back to ’Nam: Paul (Delroy Lindo), Otis (Clarke Peters), Melvin (Isiah Whitlock Jr) and Eddie (Norm Lewis). Unexpectedly along for the ride, to Paul’s resentment, is his grown son David (Jonathan Majors).

Officially, the Bloods are reuniting to recover the body of their beloved squad leader, Stormin’ Norman (Chadwick Boseman). Revered by his men as ‘our Malcolm and our Martin,’ Norman raised their political consciousness before being killed in action when the Bloods were investigating a downed cargo plane.

Something else apart from Norman and the plane is buried in a long-ago mudslide: a stash of gold bullion that only the Bloods know about. As they dance and drink to Marvin Gaye in Ho Chi Minh City’s ‘Apocalypse Now’ bar, they remember how ‘when we got back from ’Nam we didn’t get nothing but a hard time’ – and now, with the help of Otis’s old flame Tiên (Lê Y Lan) and French wheeler-dealer Desroche (Jean Reno), they’re retrieving their long-deserved payday.

But how they’ll spend that money becomes a sore point. When they originally found the trove, Norman suggested they donate it ‘to the cause’ of Black rights – and most of the Bloods still believe that’s the right thing to do. But while pigeon-toed Eddie has found success with a chain of car dealerships, resentful, traumatised Paul wears a MAGA cap, and supports Donald Trump out of resentment: ‘I’m tired of not getting mine, man!’ To David, an earnest inner-city schoolteacher, the Trump thing reveals his dad’s deteriorating mental health, so he’s here to watch out for his father.

Because of its themes of male fellowship, regret, violence and nostalgia, Da 5 Bloods has been compared to Quentin Tarantino’s Once Upon A Time… In Hollywood and, perhaps because it’s also a Netflix film, to Martin Scorsese’s The Irishman. But Lee’s critical gaze seeks a more complex intersection of colonialism and racial exploitation.

He collages archival recordings and imagery to show how the atrocities of Vietnam, the ‘first televised war’, unfolded in parallel with the civil rights struggle back home. We get speeches by Martin Luther King and Malcolm X, key moments in black history, and re-enacted North Vietnamese radio propaganda broadcasts by Trịnh Thị Ngọ, known among US troops as ‘Hanoi Hannah’ (a silky, cigarette-puffing Van Veronica Ngo).

Rather than treating Vietnam as terra nullius for his American story, Lee also highlights the war’s effect on Vietnamese people, from landmine-maimed beggars to the Viet Cong sappers sharing love poetry; from unfailingly polite tour guide Vinh (Johnny Trí Nguyen) to Chu (Nhu Thuc), the chicken vendor who, out of desperation, pesters an increasingly panicked Paul. Despite its new capitalist trappings, this is still a Communist country: as Vinh explains, the war cleaved his family between North and South.

Tiên also tells a heartbroken Otis how she clawed her way to postwar prosperity despite the stigma she and Otis’s black daughter, Michon (Sandy Huong Pham), have faced. And in the characters of Desroche and Hedy (Mélanie Thierry) – the pampered young founder of LAMB, an anti-landmine NGO – Lee reckons with the paternalism of Vietnam’s longer French colonial history.

The best thing about this film is its marshalling of cinematic texture to show how yearning regret burnishes memory. Lee interweaves flashback sequences by switching from crisp digital widescreen to colour-saturated 16mm. These action scenes play out over Terence Blanchard’s sometimes intrusively lush score. The self-conscious artifice is Hollywood homage – not just to the obvious stuff, like Apocalypse Now (1979) and Platoon (1986), or even to David O Russell’s gold-hunting war movie Three Kings (1999) – but also to older adventure yarns including Treasure of the Sierra Madre (1948), Bridge on the River Kwai (1957) and Kelly’s Heroes (1970).

In these sequences the old Bloods play their own younger selves, while – poignantly – Norman lives in their memories, forever boyish and handsome. He’s their leader, but he also seems a little like their son – and Boseman’s charisma explains why David, Paul’s own son, has never been able to live up to this ghost from his father’s past.

Da 5 Bloods loses focus, however, in its contemporary sequences, when the pace slackens, the characters bicker, and the tone wanders between comedy, action and melodrama. While the Bloods name-check Reagan-era muscle movies Rambo: First Blood (1982) and Missing in Action (1984), Lee’s genre satire fails to skewer Paul’s rugged-individualist ideology. And while the main cast’s performances are magnetic, and already provoking awards chatter, other characters are thinly drawn and some plotlines don’t really make sense.

But ultimately, Da 5 Bloods is engaging because it’s animated by complex, emotionally charged politics. It’s a provocation, shot through with genuine pathos: a movie about the past that will always speak about what’s going on.