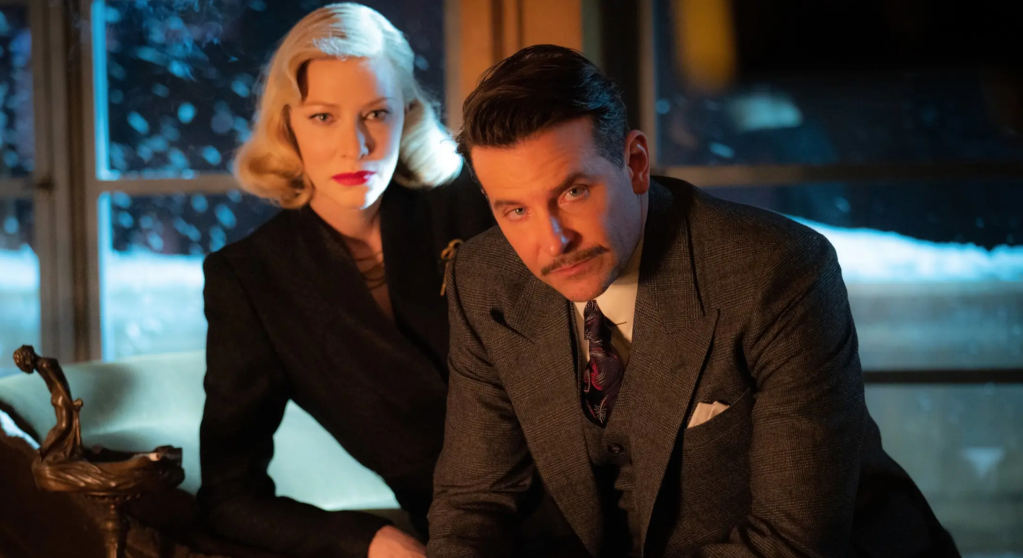 It takes a good seven minutes or so before Stanton ‘Stan’ Carlisle (Bradley Cooper) says a word in Guillermo del Toro’s extravagant adaptation of Nightmare Alley, based on the 1946 novel by William Lindsay Gresham. Stan’s a man who plays his cards close to his chest, perhaps because he’s aware (unconsciously at least) that he’s got a weak hand. He’s a grifter, a con man running from a past nobody cares about but him; he’s all front, but for a while that front looks like it’s all he needs.

Stan’s first words come while he’s hunting down an escaped ‘geek’ at the carnival he’s washed up at. A geek is a creature more animal than man; later carnival owner Clem Hoatley (Willem Dafoe) will explain the process that turns a regular wino into a non-verbal freak biting the heads off chickens for the crowd. A geek is about as low as you can get, in the carnival world or out of it; Stan plans to get as far out of it as it can.

Guillermo del Toro clearly loves the carnival side of this story (the novel was originally turned into a film in 1947; this version sticks a little closer to the source). He recreates the long-gone world of the travelling show with loving detail even as he takes pains to present it as both exploitative and weirdly caring. They’re a family – just not one you’d want to encounter with your guard down.

Stan soon falls in with fortune-telling duo Zeena (Toni Collette) and the once masterful, now largely drunk Pete (David Strathairn). They bilk the rubes, but they’ll only go so far: putting on a ‘spook show’, a performance where the bogus mystic uses their cons and tricks to pretend to speak to the dead, is a no-no. Stan, it’s soon clear, has no such qualms. Nor is he put off from making the moves on the innocent Molly (Rooney Mara), despite her circus strongman protector (Ron Perlman).

Things play out roughly as Stan planned, though maybe not exactly as he might have wished. Two years later, he and Molly are doing a mentalist act for high society at supper clubs, pulling the same tricks (if you’ve ever wondered how mind reading ‘works’, this can be quite educational) on people in fancier clothes but with the same desperate needs.

This stretch of the film is a gorgeous art deco fantasy. The events take place over a (very) few weeks across the end of 1941, and nobody sets foot in a building that was built a minute before then. It makes Del Toro’s point – on the surface it’s a much more upmarket world than the carnival, but only on the surface – but it all occasionally veers a little close to being just an exercise in style when a noir requires a little more dirt under the fingernails.

The arrival of society shrink Dr. Lilith Ritter (Cate Blanchett) provides Stan’s intro to the kind of people willing to pay big money to contact the dead, notably the sinister Ezra Grindle (Richard Jenkins). But a spook show is risky at the best of times and Molly (rightly) isn’t keen. When a confidence man gets a little too confident, it doesn’t take long for things to fall apart.

This is a film noir nightmare straight from the source, and del Toro isn’t afraid to let it slide into outright horror (everyone here who dies, dies hard). That said, horror is usually a group affair – you have an ensemble cast so you can kill them off – so it takes a little while to realise that, despite the film’s large cast, this is Stan’s nightmare alone. He’s the one that brings it all down on himself.

Everyone in the cast hits all the right notes. Collette’s Zeena is down to earth and bored. Blanchette’s Dr. Lillth is an icey femme fatale with just enough sadness to keep her human. Cooper has the tough job of playing an (intentionally) blank slate for much of the film, a man whose motivations remain hidden even from himself and whose depths the story takes its time exploring. He makes it look easy, and makes the film in the process.

Cooper’s performance makes everything about Stan – a character who undergoes a couple of major shifts through the course of the film – seem inevitable. Which is exactly as it should be in a film about a man trapped in a hell of his own making. There are plenty of twists but few surprises here.

This is an alley with no escape.

Based on the novel by William Lindsay Gresham.