Film Review: My Name is Gulpilil captures the legacy of a star

Gulpilil takes centre stage one last time in a meditative portrait of one of our most complex, brilliant and important screen performers.
Kalu Oji 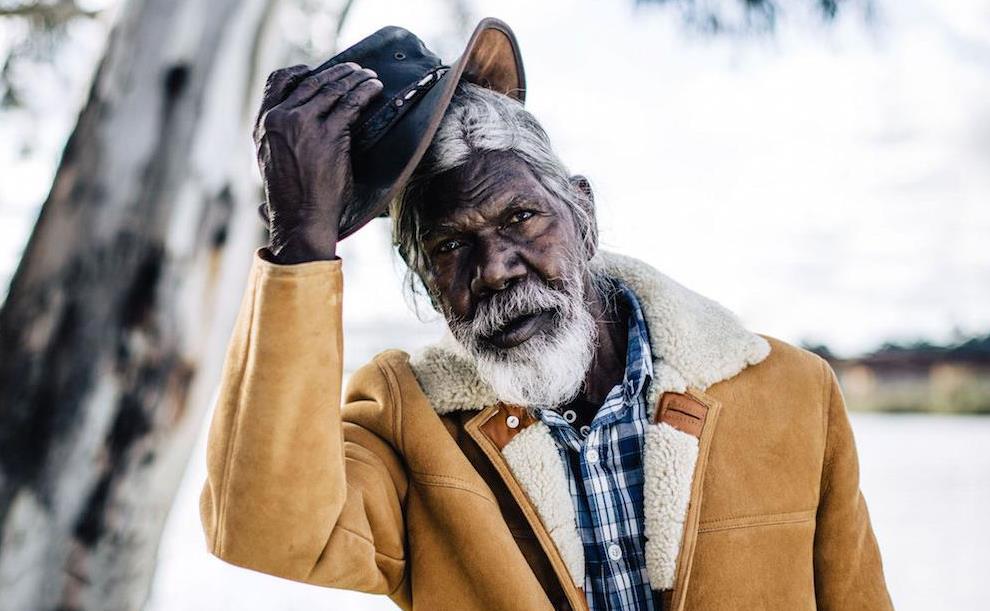 The icon takes a bow. Photo of David Gulpilil by Miles Rowland.

With a narrative both drenched in tragedy and bouncing with life, My Name is Gulpilil is a documentary portrait of a man who changed Australian screen representation forever.

The film opens with a moment of pure cinematic magic. Gulpilil, delicate with every step, walks down a wide open road. With the lightest of movements, he steps to his left, revealing an emu walking just metres in front of him. What follows transcends physical (at least Western) understanding, as the two move in almost complete synchronicity. Gulpilil steps. The emu steps. Gulpilil turns. The emu turns. This moment does more than just make for a beautiful opening scene; it communicates resoundingly one of the most significant themes of this film, and an overarching aspect of Gulpilil’s life: his deep, profound and ineradicable connection to Country.

Now aged 67, Gulpilil, a Yolgnu man, was sent to mission school in Maningrida as a young boy. Falling into the film industry almost by accident due to his proficiency as a hunter, tracker, and dancer, the documentary portrays the life and work of one this country’s most outstanding acting talents. Using footage from his broad body of work, director Molly Reynolds (Another Country, Twelve Canoes) establishes herself as a seasoned documentary veteran, seamlessly taking us on Gulpilil’s journey from early works such as Walkabout (1971) and Crocodile Dundee (1986), to later into his career with works such as Charlie’s Country (2014). Reynolds’ vision is cut by veteran editor and previous Gulpilil collaborator, Tania Nehme, who knits the esteemed actor’s career milestones alongside much frailer, present day footage of a life now in scrupulous medical care. This combination of new and old material works perfectly to celebrate the wholeness of Gulpilil’s extraordinary career, pairing poignantly with his own meditation on death as he comes to terms with his mortality and awareness that he is about to step into the next stage of life. ‘I’m on a one-way ticket back to Country.’

Read: From Now Till Then: Kalu Oji gives the perspective of an African-Australian film school graduate

It is here that we find the crux of the film. Battling lung cancer, Gulpilil’s life is dependent on Western medical care which keeps him three and a half thousand kilometers from his ancestral home. Gulpilil’s situation is the unbearable tragedy facing so many Indigenous Australians: a prolonged life separate from Country, or the almost certain death of returning home.

Gulpilil tells a story. He’s on a press tour with one of his films, and chatting in a group. One of the guys is smoking a cigarette. He asks what it is and is offered one. He describes that moment, when he was suited up in some distant part of the world doing press, and took his first ever drag of tobacco. There is a sadness in the fact that his professional success would introduce him to the habit that will inevitably lead to his premature death.

With his long standing relationship with director Rolf de Heer, it’s no surprise that De Heer, along with Gulpilil himself, Reynolds, and Peter Djigirr are producers on this film. With their collaborative relationship dating back to The Tracker (2002), de Heer and Gulpilil produced the first ever Australian fully Indigenous language film Ten Canoes (in Yolgnu language) in 2006. In 2013 they went to Cannes with Charlie’s Country where Gulpilil would take home the Un Certain Regard award for Best Actor.

…it is noteworthy that our most prominent Indigenous actor’s body of work exists almost fully within the confines of the Anglo-Australian lens.

These are all exceptional, and unequalled, feats in advancing Indigenous Australian narratives. Again, however, there is irony. Here we have a man – a trailblazer in amplifying the Indigenous Australian voice, the first (and still one of few) dark skinned Aboriginal actors to find international success within the film industry, having his career moulded almost exclusively on films helmed by white men.

His impact is enormous. His contribution to shaping the Indigenous Australian screen narrative undisputable, and so it is interesting that his final legacy piece would again be headed by a white director with an almost exclusively white crew. And so it begs the question: Why weren’t more Indigenous Australians involved in making this documentary? I am not suggesting that Gulpilil should be saddled with the moral obligation ‘minority’ practitioners are so often burdened with to ensure they work with and ‘raise up’ fellow minority colleagues, however it is noteworthy that our most prominent Indigenous actor’s body of work exists almost fully within the confines of the Anglo-Australian lens.

Wide eyed and with a smile on his face, Gulpilil proclaims, ‘I don’t act. I just go and stand in, and the camera sees me’.

I can let you know now, Mr Gulpilil. We see you. The world sees you. And we thank you for all that you have given us.