Film Review: Miss Fisher and the Crypt of Tears is one for the fans

It's not a prestige drama or an outright parody, which makes critical assessment tricky, says Mel Campbell.
Mel Campbell 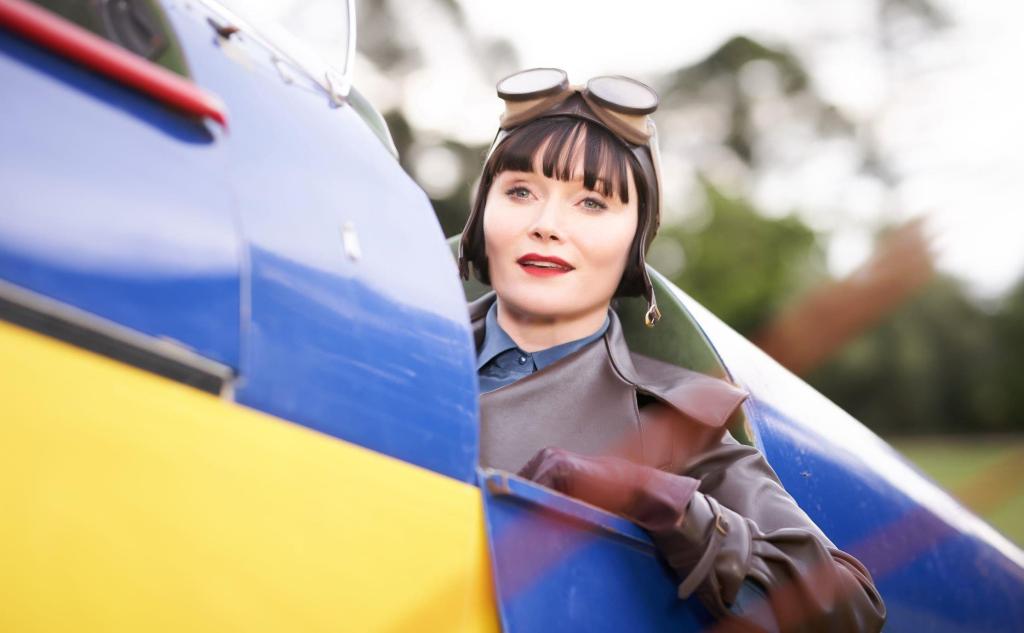 Gatecrashing her own funeral in biplane – Miss Fisher and the Crypt of Tears. Image courtesy Roadshow.

It’s been a long time coming – including a successful crowdfunding campaign – but the creative team behind the cult favourite TV series Miss Fisher’s Murder Mysteries have at last brought their heroine, fabulous flapper sleuth the Hon. Miss Phryne Fisher (Essie Davis), to the big screen – and to the wide world beyond 1920s Melbourne.

Everything fans find delightful about this cosy crime romp is here. Colourful, glamorous costumes (here, by Margot Wilson). Sassy verbal jousting with posh cads and bumbling bureaucrats. Alleyway chases after mysterious men in trench coats and fedoras. Balls and cocktail parties in mansions. Phryne Fisher’s pearl-handled gold revolver. Her fussy aunt Prudence (Miriam Margolyes). And, best of all, the romantic tension between our flighty heroine and the stoic Detective Inspector Jack Robinson (Nathan Page), who finds her constant interference in his investigations both exasperating and alluring.

Writer Deborah Cox and director Tony Tilse, who’ve shepherded the series from the start, begin the action in British Palestine, 1929, as Phryne daringly frees a young Bedouin political prisoner, Shirin Abbas (Izabella Yena). It’s a fun sequence that involves an Aladdin-style chase over Jerusalem rooftops; a smug colonial administrator and thuggish prison guard to outwit; a pit stop to flirt with an archaeologist old flame, Professor Linnaeus (John Waters); and a race along the top of a steam train about to head into a tunnel.

Reports reach Phryne’s nearest and dearest that she was killed by the train. Sobbing, her friend and former ward Dot Collins (Ashleigh Cummings) breaks the news to her policeman husband Hugh (Hugo Johnstone-Burt), as well as to Phryne’s fixers Bert (Travis McMahon) and Cec (Anthony J Sharpe). Enough about them, though, because they’re literally never seen or spoken of again in the film.

Of course, Miss Fisher would never actually be dead so early in a movie with her name on it; but rather than being gladdened by her survival, Jack pouts numbly and is only reluctantly jollied into aiding Phryne’s investigation by the fact the Australian High Commissioner (William Zappa) has confiscated their passports until they solve the mystery. Shirin is determined to track down the men who massacred her oasis village; and it’s all linked to an absurd green plastic jewel from a legendary tomb called the Crypt of Tears.

This genre territory is absolutely well worn, like the favourite pyjamas in which fans snuggle up to watch Miss Fisher on the ABC – and, internationally, on Acorn TV. To find it enjoyable, you’ve got to commit to its essential lightness – which isn’t really found elsewhere in Australian film and TV. This is no prestige period drama weighed down by an imperative to historical accuracy. Nor is it dour, politically charged or full of psychological trauma, as we’ve come to expect from ‘quality’ crime thrillers. And while it’s very silly and flippant, it isn’t clownish, and it never cynically parodies its own genre or characters.

So, this makes a critical assessment tricky. Every time I found myself tempted to wince at broadly attempted ‘foreign’ accents and corny plot devices, to criticise Phryne’s vast wardrobe of glamorous outfits for their impracticality and anachronistic flourishes, or to roll my eyes at the way ‘Palestine’ is treated as a spicy source of mystery and adventure rather than a site of genuine struggle for political self-determination, I had to stop and remind myself that those simply are not the stakes of this film.

Instead, this film’s success depends on its capacity for big-screen spectacle and flair. And unfortunately, The Crypt of Tears doesn’t quite rise to the occasion. Throughout, I got the sense I would devour this unquestioningly if it had been a Kerry Greenwood novel – which shows how intuitively Cox’s original script grasps the playful, escapist universe Greenwood established in the 1990s. But its plot holes are huge enough to drive a Hispano-Suiza through, and its tiny budget and stodgy, TV-style cinematography only barely deliver the derring-do required by the script. To put it kindly, Tilse is no Steven Spielberg or Robert Zemeckis.

Its true jewel is, of course, Essie Davis, who sparkles in the title role. She’s always a joy to watch, gamely embracing the action sequences and sashaying through the talky parlour exposition with verve and plenty of dry good humour. She’s feminist in the fun sense of blithely disregarding the rules set by men, but never stints on using her sex appeal as an investigative tool. Beside her, Lapaine strikes an enjoyable pantomime tone, while Yena, Naga and Penry-Jones bring good grace to the frequently hokey melodrama.

Meanwhile, Nathan Page is a log of wood. But Jack’s complete lack of personality doesn’t really matter in the Miss Fisher franchise, whose female gaze requires him purely to look handsome and quietly adore Phryne. Just like Jack, Miss Fisher fans will follow Phryne anywhere – and this lighthearted tale should please them mightily… and tease an even more exotic sequel.