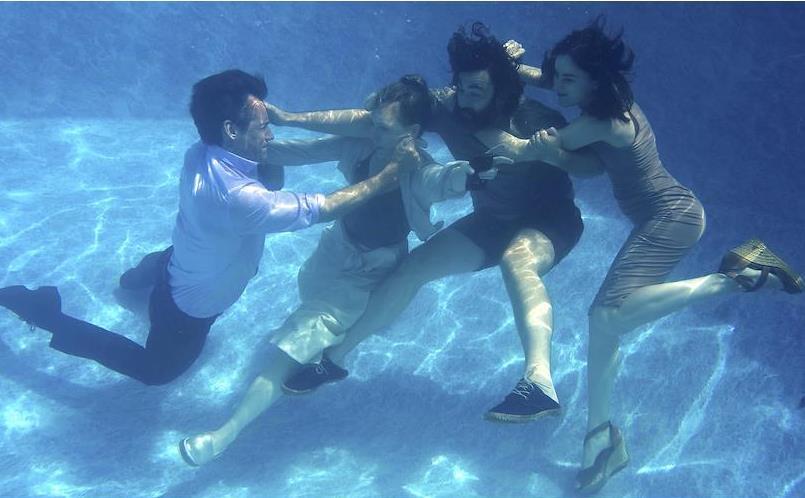 Opening with a sex scene is one way to grab an audience’s attention. But opening with a sex scene that’s clearly being filmed doesn’t just grab attention, it holds onto it: the on-screen couple might be enjoying each other’s company now, but there are going to be repercussions later. Disclosure is a rare Australian film where the script skilfully and consistently sets up little moments that have large payoffs down the line. It’s a small story that’s big on drama.

In a tight-knit, well-off regional community (Disclosure was filmed in the Dandenong Ranges), the Chalmers and Bowmen families are especially close. Their children play together; politician Joel (Tom Wren) is secretly working on a project with journalist Danny (Mark Leonard Winter). Joel’s wife Bek (Geraldine Hakewill) and Danny’s partner Emily (Matilda Ridgway) don’t seem to be quite as cosy, but they’re friendly enough.

So when the neatly dressed Chalmers drop in on the Bowmens – who are having a naked hangout by the pool – with a bodyguard in tow, there’s an edge to the meeting. It seems Joel has had a ‘credible threat’ made against him for his stance on refugees (hence the guard), but that’s not why they’re here. And for a while it’s a mystery as to exactly why they are there, with awkward silences and random chitchat that seemingly goes nowhere.

Eventually the Chalmers get to the point. The Bowmens – specifically Emily – have accused the Chalmers’ nine-year-old son of abusing their four-year-old daughter. Initially the Chalmers have gone along with their friends, but now, on reflection, they’re not exactly convinced their son is guilty. At first the menfolk seem a little removed from it all, while Emily (passionate) and Bek (reserved) press their respective cases. Gradually it becomes clear that there’s more at stake here for all of them, and while everyone says they want to do the right thing, exactly what that right thing is remains firmly up for grabs.

skilfully shuffles the audience’s sympathies, making sure things never resolve into a simple case of black and white.

Made without the usual government support or input from funding bodies, writer-director Michael Bentham and producer Donna Lyon have built interest in Disclosure through a string of successful appearances at film festivals both here and overseas. The film’s debut at the Palm Springs Film Festival at the start of 2020 led to a cluster of glowing reviews from the US press, and the film should have little difficulty replicating this locally as it moves into wider screenings nationwide.

Australian films from a writer-director often lean hard on the visual side of things, serving up films that look flashy but can feel a little thin as far as narrative goes. If anything, this goes the other way, displaying a surprising maturity when it comes to pacing and dialogue and letting much of the story play out in static long takes where costuming and sound design are used to build and shape the mood.

Across eighty or so minutes this skilfully shuffles the audience’s sympathies, making sure things never resolve into a simple case of black and white. As things escalate, the various points of view are firmly grounded in the individuals’ character. Some angles are better developed than others, but there’s never a sense that twists are being served up simply to keep the story going.

An already strong script is bolstered by excellent performances across the board. The Bowmens have a slightly tougher job of it; what’s driving them has already happened off-camera, while the Chalmers get more of a chance to slowly build up to their scenes of high emotion. But this is a true ensemble performance, where everyone plays off each other to strong effect. Hakewill and Ridgway get the big moments, but the men’s blokier bargaining rings just as true.

These kinds of films are often designed to leave audiences asking ‘What would you do?’. Disclosure turns out to be a little too specific for that; the drama here comes more from why the characters aren’t doing what we know is the right thing. That works to the film’s advantage, allowing it to let the drama play out rather than juggling events to keep a moral conundrum alive.

There have been plenty of films about bickering couples trapped in a small space over the years. Few of them have pulled it off as well as Disclosure.

Disclosure is now available to watch on digital platforms.