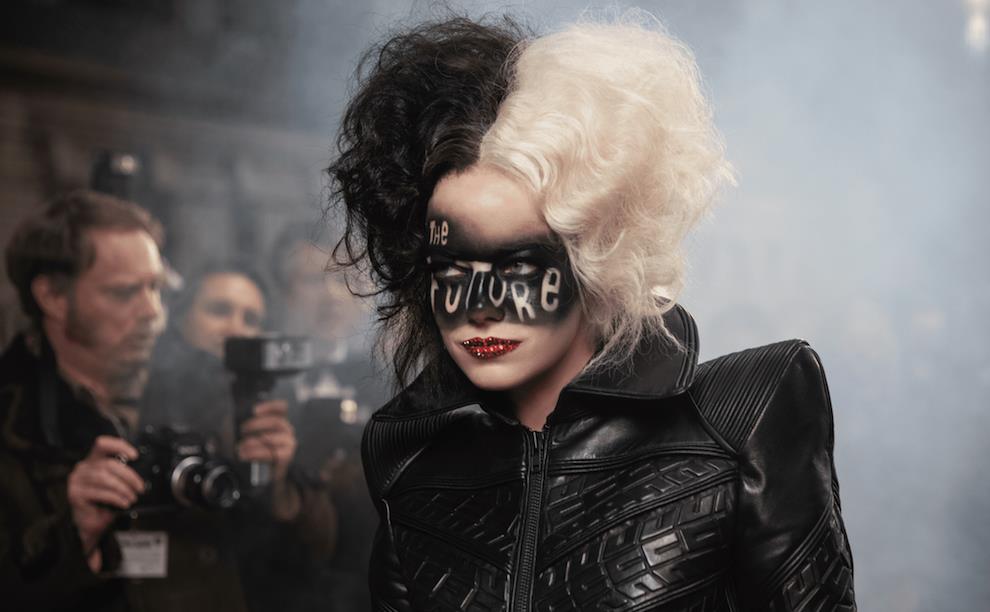 Did the world really need to know the secret origin of Cruella DeVil, bad guy in the 1961 animated Disney film One Hundred and One Dalmatians? Well, no – but at least Cruella is telling a story we haven’t heard before, which is more than can be said for around two thirds of the last decade’s worth of Disney’s live-action ‘re-imaginings’ of their animated classics. Tim Burton’s Alice in Wonderland may have made a billion dollars at the box office, but originality wasn’t what drew those crowds in (and if it was your first time encountering Alice and Wonderland, shame on whoever let you into the cinema).

Rather than following in the footsteps of straight remakes like the recent versions of The Lion King and Aladdin, which in this case Disney already did anyway in 1996 with a version starring Glenn Close, Cruella goes all the way back to the beginning – and then starts with a joke about her birth, which sets the snarky tone and lets us know that whatever this film is, it’s going to be a lot.

Rapidly rattling through both scenarios and narrative devices (there’s a lot of voice-over than never really seems to be saying much), Cruella has the kind of Disney energy that usually comes off as exhausting to any adults who happen to wander into range. ‘Cruella’ turns out to be the dark side of the black-and-white haired Estelle (played by Tipper Seifert-Clevand as a child), who rapidly goes through a brutal private school, visits an insanely lavish faux-Regency party where she trashes a runway show and sees her mother pushed off a cliff by killer Dalmatians, then flees to London and falls in with a gang of street urchins – all before we jump forward ten years and Emma Stone takes on the lead.

Stone is about 60% of why this film works (the other 40% wavers between the film’s style and Emma Thompson as bad guy fashion maven, ‘The Baroness’). As Estelle, Stone gets to play the kind of slightly quirky nice girl she plays so well. Then when the day job at The Baroness’ store that fellow urchins (and eventual sidekicks in the later films) Jasper (Joel Fry) and Horace (Paul Walter Hauser) wrangle for her goes bad, so does she… which gives Stone the chance to play the unhinged wild card she (also) does so well.

Read: Exhibition Review: ‘Disney: The Magic of Animation’ at ACMI

Of course, being bad is exactly the attention-grabbing stunt that appeals to The Baroness, scoring Estelle the low-level fashion job she’s always wanted. If all of this so far sounds a little small scale, that’s because it (refreshingly) is. Being an origin story of a woman who just wanted to turn a bunch of dogs into a coat means this side-steps the bloated stakes that often make Disney films feel try-hard (remember the giant fantasy battle that was the climax of the second Maleficent film?). Estelle just wants to find her own power, and if that means letting Cruella loose in a no-holds-barred, punk-inspired fashion war on The Baroness (who intriguingly has the necklace that was lost the night Estelle’s mother died), so be it.

As almost certainly the first Disney film to feature both the Rolling Stones and a cover of Iggy Pop’s ‘I Wanna Be Your Dog’, Cruella isn’t afraid to be (a tiny bit) more edgy than you might expect. The wit of Australian co-writer Tony McNamara (The Great, The Favourite) is perhaps part of this edge. It’s still all safely retro mind you, as the film updates Disney’s traditional cockney cod-Victorian London to somewhere around 1970-ish so Cruella can invent a sanitised version of punk fashion with the help of Artie (John McCrea) a slightly Bowie-esque vintage clothing shop owner. No doubt real fashionistas could poke holes in the outfits all night long, but they look stylish and striking in a satisfyingly stylised way.

At 135 minutes this could easily have followed The Baroness’s approach to design and sliced off a sleeve or two without losing much of substance, but as a film that’s largely a series of wacky heists involving cute dogs that take place during fashion shows the whole thing just flies by.

The most leaden moments are when it looks back to the previous films (which are also in the future). The various easter eggs and moments of foreshadowing are the kind of things this kind of film is required to do, but they’re also the least interesting thing about it. The suggestion that the outright villain Cruella would eventually become was, in part, just canny marketing is more interesting, but only just.

Really, as long as she’s staging outrageous displays of public fashion, who cares about the rest?