Film Review: Celeste – The Work of an Australian Auteur

Australian auteurs relish Tropic Gothic as it confronts flesh, memory and the blurred promises of sexuality. Adrian Martin examines Celeste and the work of Ben Hackworth.
Adrian Martin
[This is archived content and may not display in the originally intended format.] 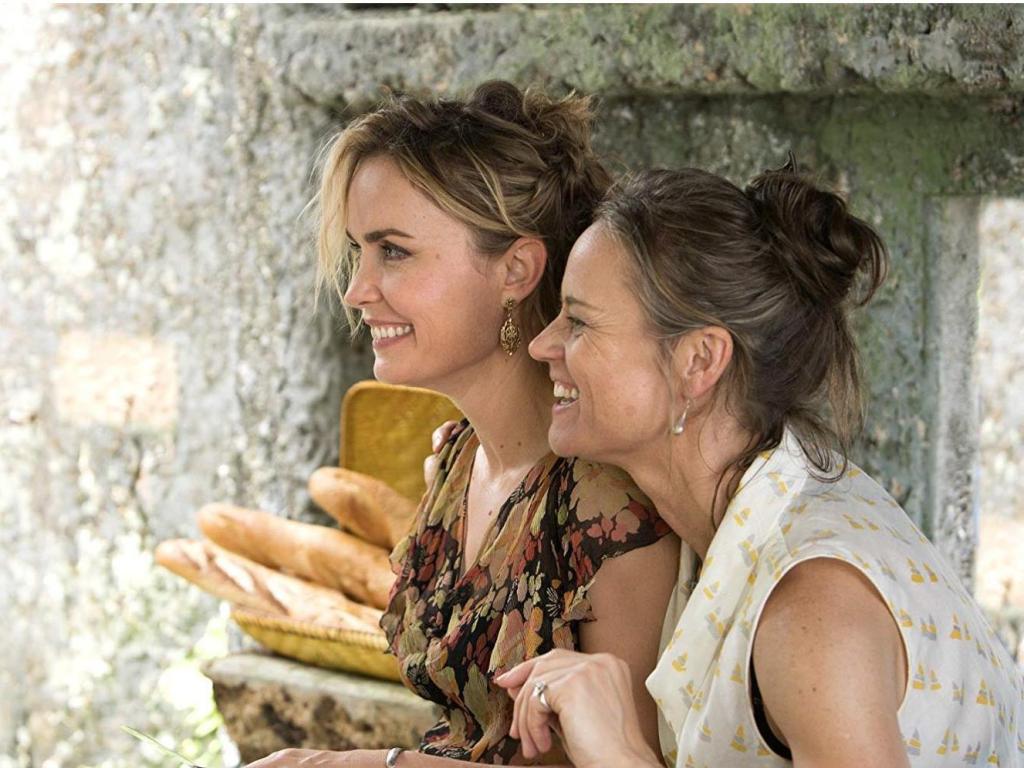 Image: Nadine Garner and Radha Mitchell in a tender moment in Celeste

A short Australian film produced at the Victorian College of the Arts (VCA) in 2002 evokes a great deal in a single scene running less than four minutes. Ben Hackworth’s Half Sister shows us a young woman, Elsie (played by Tara Judah, the film critic and programmer now based in the UK), fleeing into a bathroom and locking the door to halt the entrance of a stern, raving father we glimpse only through frosted glass in the film’s closing seconds. Elsie is in full showbiz costume, which is perhaps the source of the man’s rage: she looks like she could be the star performer in a queer cabaret.

As Elsie begins to remove her make-up and clothing to take a bath, we become aware that there’s a small boy in this room with her. Their relationship is obviously warm, close, complicit – there’s no hint of embarrassment on either side, and in fact the boy is rather entranced by Elsie’s discarded fake eyelashes. She doesn’t say much, beyond one ominous point of precision that is echoed in the film’s title: “He’s not my father”. Parents who are not very parental in a conventional sense (for good and for ill), and half-siblings who casually “cross the lines” in their rituals of familiarity: the cinema of Ben Hackworth, indisputably an “auteur” in the Australian context, is already fully formed there, in microcosm.

Sixteen years later, in his second feature Celeste, premiered last October at the Adelaide Film Festival, Hackworth again guides us – rather more gently, this time – into the potentially murky, even deliciously perverse waters of modern family life. Jack (Thomas Cocquerel) is a young man who has put considerable distance, in both space and time, between himself and the trauma of his family past – a past in which, among other things, he discovered his father fooling around with his teenage girlfriend. But when Jack encounters a spot of trouble (an unpaid debt) in the city, he finally heeds the call of his radiant step-mother, Celeste (Radha Mitchell in her best screen role to date), and returns to immerse himself in the “tropical paradise” of Paronella Park.

It is in this lush setting that Celeste – formerly a star opera singer – plans to give a celebratory, comeback performance. But, as we gradually learn, she is troubled not only by understandable stage fright and other ominous ailments, but also by an enigmatic set of personal relationships – with her closest friend, Grace (Nadine Garner), with the memory and legacy of her late husband, and eventually with Jack himself, “all grown up” as she wryly observes.

Hackworth has never been much of a believer in the ersatz “script construction” wisdom pedalled by the likes of Robert McKee, so in Celeste he violates a cardinal rule of the mainstream in giving us two central characters who, for much of the film, don’t share screen time. The film begins as Jack’s story, inside his viewpoint, but then drifts over to become, also, Celeste’s story; and it maintains this shifting, dual focus throughout, which is a neat balancing act.

Celeste is a strong achievement in many departments: the acting is uniformly good, the production design (by Ross Wallace) is precisely detailed, and the cinematography by Hackworth’s regular collaborator Katie Milwright is superb: the Queensland location is used not as a vaguely picturesque “landscape backdrop”, but in a specifically expressive way, modulated and transformed from scene to scene.

There are some contrivances in the script (credited to Hackworth and the celebrated theatre figure Bille Brown, who died in 2013), such as a generic duo of thugs on Jack’s trail who weirdly appear and disappear strictly as the plot has need of them; and the film has trouble finding an ending beyond a typical “life goes on” dribble-out. It’s also oddly discreet at moments where it could have productively pushed into more full-blooded, melodramatic terrain – especially in relation to the growing tension between Celeste and Jack’s other, “age appropriate” love interest, Rita (Odessa Young).

Celeste shows Hackworth, at this point in his career, working out how to navigate a path between the European or Asian art cinema he aims to emulate, and the demands of a more typically “relatable” dramatic narrative. The film grows in interest and suggestiveness, however, if we place it in the total context of his work – two features and four shorts. For Hackworth – and this much should be evident by now – the family unit is fundamentally ambiguous. There are no clear lines of demarcation between parents and children, or between siblings. His characters live in an age of families that are variously broken, open, or just plain complicated.

Hackworth has referred to his own experience of living with a stepmother as one of the sources of inspiration for Celeste – and it’s precisely the gap between a conventional, familial role (such as “biological mother”) and the situations or tensions inevitably arising between living, desiring, human beings that underpins both this film and all his previous work. Although, in their style, his films are nothing like John Cassavetes’, some viewers may well recall the charged, ever-shifting bonds between parents, brothers, sisters and kids in masterworks including Love Streams (1984) and Gloria (1980).

In Hackworth’s Cannes-selected, VCA-made, twenty-minute short Martin Four (2001), a single mother, Grace (Susan Lyons), pining over the lost, romantic adventures of her youth, enjoys a close – perhaps suffocating – bond with her young-adult son, Martin (Todd MacDonald). He, meanwhile, cruises the town on his bicycle, exploring (presumably in a fairly secretive way) his burgeoning gay sexuality. As frequently occurs in Hackworth’s films, the sensual ties between characters are expressed less in overt words than in physical gestures of dance, touch, or merely the simple fact of bodily proximity in deliberately overdressed, overstuffed interior spaces. In such baroque settings, even the banal chores of daily life (cooking, cleaning, sorting out accumulated stuff) carry an intense air of theatrical performance, as if our deepest personal identities are formed in a crucible of improvised performance – another reminder of Cassavetes, this time of Opening Night (1977).

This life-as-theatre theme found its grandest articulation in what is by far Hackworth’s most experimental piece so far, his debut feature Corroboree (2007). In it, another young drifter (Conor O’Hanlon) is called to a large, rambling house in which five women, in turn, hand him bits of scripted dialogue and enact scenes from the unsatisfied life of yet another ambiguous father-figure – a ghostly demiurge who prowls in the shadows and studies the scenes on video playback. All of Hackworth’s obsessions with the porous and perverse connections in family life get their opportunity to be played out here.

In its manner, Corroboree is like half a dozen Jacques Rivette films in one and, as in the master’s Céline and Julie Go Boating (1974), the solemn aura of ritual is mercifully accompanied by comical bits in which none of the designated performers seem to know quite where to stand or what to do next. But, from the first shot, Hackworth and his collaborators bravely nail down their audiovisual form – mostly static camera, distant group framings, drawn-out durations, ambient sound peppered with atonal musical stylings – and stick with it, creating a thick mood that is unique in the annals of Australian cinema.

My favourite Hackworth film remains his 17 minute, AFC-funded Violet Lives Upstairs (2003) which, like Corroboree, features the wonderful Rebecca Frith. Interpersonal mystery and the blurring of fixed roles again drive the motor – as Violet peers out her window at the Italian father and son duo (equally smouldering in their attractiveness!) who live downstairs, and picks up the phone for her nightly dose of exotic, anonymous sex talk. Plot intrigue, however, is secondary to atmosphere and moment-to-moment detail, with Hackworth here sailing close to the best of Wong Kar-wai’s modern romances. Once he figures out how to do that over a full feature, Australian cinema will indeed have a fully-fledged, international auteur on its hands.