After a lot of grief to assemble its present structure, Create NSW takes a backward step to recreate Screen NSW.
David Tiley
[This is archived content and may not display in the originally intended format.] 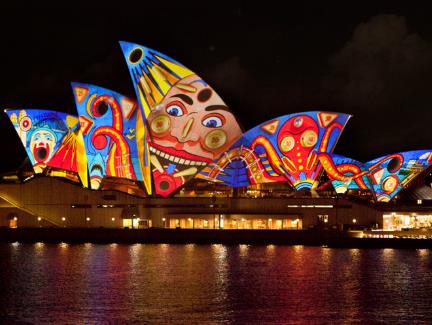 Liberating the zanies as Create NSW undoes a marriage of convenience. Image: Vivid.

State governments always have trouble managing their arts funding. They push the process into different clusters of ministries, prioritise small or large companies, fiddle with base funding, muck around with decision-making systems, and adjust rural or urban priorities.

Although these choices can make or break companies, careers and audiences, they rarely add up to genuine changes in fundamental policies. In Leonard Cohen’s wonderful phrase, ‘a scheme is not a vision’.

Create NSW has made a series of changes after the last election which gave Premier Gladys Berejiklian a chance to break with the recent past.  Now we have a restructure which stands to benefit both sides of a messy dynastic marriage of opposites which looked neat only on a whiteboard.

One of the big areas of contention has been the screen sector. Though it is justified by culture, the basic heartbeat is financial. To accomodate this tenson film agencies have variously been industrial, cultural, independent or departmental toys. Generally speaking, if they are not caught up in bright ideas from government, or too bureaucratised, they eventually become independent statutory bodies with a remit that allows some daring.

Late in 2016 Arts Minister and Deputy Premier Troy Grant announced that Arts NSW, run by Michael Brealey at the time, and Screen NSW, headed by Courtney Gibson, were to be clumped together into Create NSW, which would become part of the Justice Department. That is not a structure which encourages independence.

The Arts side had a budget of $52 million and 51 full-time equivalent roles, making it the senior partner to an agency with 17 people managing $10 million. However, Screen NSW had a reputation for unleashed dynamism after years of being given peanuts and shackled to the floor in the old NSW Film and Television Office.

Brealey ended up as head of the agency and Gibson left. Brealey had already done policy time at the ABC, so had some sympathy for the screen side as he tried to run an organisation combining such different approaches to creativity.

The custodian of the film work was Grainne Brunsdon who was, and is known to be, effective and widely cultured.

The problem for both sides is not just administrative, but concerns leadership and collective identity. The local sectors always benefit from a dynamic leader who can press the case for cultural funding and a patriotism of imagination.

Brealey managed the whole transition and stayed for three years. In June 2018, he went to Screen Australia as Chief Operating Officer. Elizabeth W. Scott was shipped in from the US to replace Brealey as the newly appointed Executive Director, Create Investment and Engagement with much made of her 25 years of experience advising cultural organisations across the USA, UK and Australia – a kind of shining hope offered to the sector.

Scott commenced in the role 1 August 2018; barely a year later the announcement that she has moved on to pursue ‘other opportunities’, is tacked on to the end of today’s media release on Create NSW’s Leadership restructure. In that past year, despite repeated attempts, Scott declined an interview with ArtsHub outlining her vision for Create NSW.

This week’s genial press release makes a lot more sense when you know this history.

After the last election, the government moved Create NSW away from Justice into the Community Engagement portfolio of the Department of Premier and Cabinet, which reflects its obsession both with Western Sydney and with rural access to the arts. The details of that agenda are fraught but the generally democratic temper bodes well for our cultural future.

Now Create NSW sits alongside ‘the State Archives and Records Authority, the Cultural Institutions including the Australian Museum, Sydney Opera House, Museum of Applied Arts and Sciences (MAAS), Sydney Living Museums, the State Library of NSW and the Art Gallery of NSW, with Aboriginal Affairs, Heritage and Employee Relations,’ according to the announcement.

But the big news is this: screen has now been split out from the old blobby Create NSW and is now once again to be called Screen NSW. Grainne Brunsdon is its head, regarded as a good idea.

Create NSW seems to have a new kind of coherence. There will still be an Executive Director who is ultimately responsible for the screen side so Brunsdon does not have quite the freedom of her equivalents round Australia. The head will be Deputy Secretary Kate Foy until a new appointment is made.

This is how the structure will look from September 16 according to the release:

‘Executive Director of Create NSW – a new role that brings together the arts, screen, culture and infrastructure functions; responsible for the leadership of the organisation and reporting to Kate Foy. This vacant role will be advertised shortly and fulfilled by Ms Foy until a candidate is appointed.

Director, Partnerships and Policy – Ms Alex Bowen will lead strategic coordination of policy across government and will lead on our interactions with the Commonwealth and the arts and cultural sector.

Director, Business Operations, Investment and Governance – Ms Sue Procter will lead this enhanced role and be the single point of coordination for administration of artsinvestment, grants, supporting the new Artform Boards and providing sound financial management across our activities.

Head, Screen NSW – Ms Grainne Brunsdon will be Head of Screen NSW, a new role that builds upon our success in recent years and months in promoting NSW as Australia’s leading state for film and television production and the location of choice for international and local production and post-production.

The teams that sit within Create NSW remain unchanged, however there will be a realignment of reporting relationships. It is business as usual while we make these changes to our internal arrangements.’