While the box office suffers from lockdowns, Raya and the Last Dragon is doing well, despite criticism about its use of Asian culture.
David Tiley 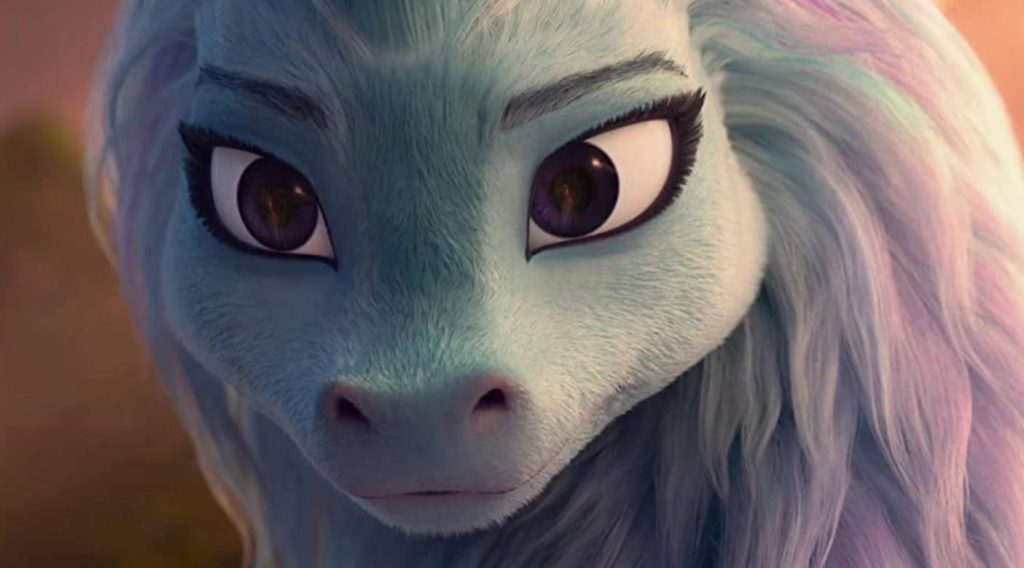 Could this be an accusing stare? The dragon in Raya and the Last Dragon. Image: IMDB

The international box office results for the past week provide a revealing glimpse of cultural appropriation in action at the blockbuster level, but first, we should look at our own tortured exhibition sector.

With half of Australia in lockdown, the box office took a terrible pounding. Space Jam: A New Legacy stayed at number one but only took $795,000 and dropped 162 screens; Black Widow was down 65% and lost 304 of its 520 screens, as venues closed completely.

M. Night Shyamalan’s thriller Old crept into cinemas on 155 screens and took $422,000, though mainstream reviews are bewildered and offputting.

Just a week ago the US trades were purring over the rising box office total, but now they too have noticed that the blockbusters are losing audiences steeply after week one. That has been evident here for a while, but Variety has a grimmer explanation: ‘A worsening public health picture — one exacerbated by anti-vaccine conspiracy theories — and a maze of day-and-date distribution strategies that appear to be cannibalizing ticket sales, are raising questions about the viability of a theatrical comeback.’

But Hollywood newsletter The Ankler argues that Black Widow‘s performance is actually remarkably good, since it is such an obscure part of the Marvel canon. To me, that supports the notion that the audience for those fantasy tentpoles continues to broaden and the escapism is more adult.

The point is appropriation

Raya and the Last Dragon is also an instructive success story. Disney pushed it out in March with little support, but it is still in circulation at the box office with $73 million from North America. Now the premium run has ended on Disney+, and it recently topped the movie streaming lists, beating anything on Netflix, and second only to the latest series of Lucifer. It was released earlier in Australia, and has made $10.3 million.

But Disney was given a rude financial message about cultural sensitivity – the picture did $27 million in China over two weeks, which was very disappointing. It bombed across Asia, with Japan the only other significant market with $4.5 million. That compares badly with Russia, where it made $17 million. Nearly all the major creatives were women and the project had plenty of non-European names including writers Qui Nguyen and Adele Lim, but the film treated Asia as a large blob rather than a fantastic mix of diverse cultures.

The strategy of moving sideways into fantasy and then cherrypicking amusing visual and cultural tropes worked well for Black Panther and the mythical kingdom of Wakanda, but turned out to be offensive here. Shirley Li in The Atlantic eloquently but calmly describes the problem as a lack of interconnectivity between the world and story, while NBC News displays the bitter-sweet contradictions on Twitter, mostly around the voice cast which were of Chinese descent rather than a South-East Asian background. The internet reacted badly to a claim that the film was derived from the television series Avatar: The Last Airbender.

There is a much bigger issue here than the box office financials of Hollywood studios and the health of Australian exhibitors pushed once more into shutting their doors. Those huge budget films inevitably must appeal to broad demographics in many languages – indeed, that sector only exists because they make as much as 80% of their returns outside the United States. Raya was created by a gang of creators excited by the idea of plunging into the riches of South-East Asian civilisations to create something which is ‘just a story’ with a gentle message about peace and respect.

But their approach to cultural specificity and true empowerment is muddled by a mix of tokenism and indifference to different ways of seeing the world. Surely, these blob films are not inevitable, and Hollywood can do much better.

Unfortunately, they rely enormously on shorthand stereotypes, while they pretend that a good fighting climax is the only structure for myths, denying the most basic ways in which enduring stories both depict and interact with our understanding of cause and effect in the cosmos.

The health of our storytelling media is not played out on these huge (monstrous) visions anyway, but in the steady production of film and TV shows that revel in diversity and challenging points of view.

Day by day, Australian Indigenous screen storytellers do the hard work of exploring the changes and conflicts of our own mutating culture, which I believe is much deeper than we care to explore. And why should Anglo-Celtic Australia have the right to interrogate Indigenous people over how they are solving our problems?

The social media response to Black Panther, Moana and Raya and the Last Dragon makes me feel sad. People are so undermined they are grateful that they can see bits of their culture – detached and reproduced – on screen.

Maybe we should just call it for what it is. Theft, entitlement and cultural appropriation. Is that for me to say?