US screen strike action is close to the brink

Only in LA would crew union IATSE hire a sky ad to campaign for strike action. They are remarkably united about the desperate need for change.
David Tiley 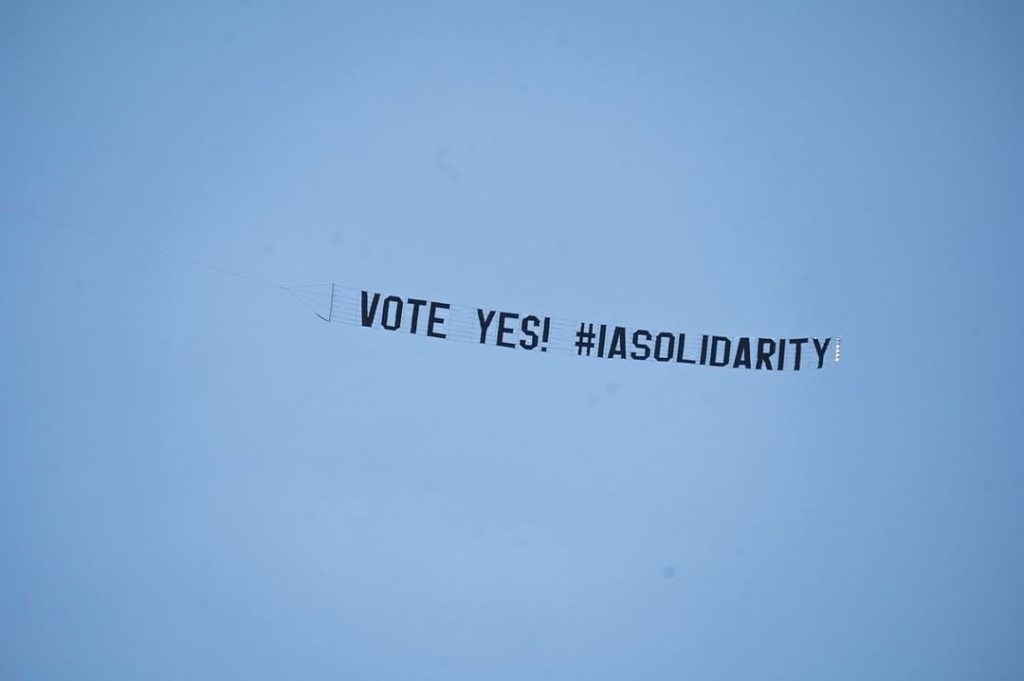 Hollywood screen technicians are not the sorts of people who hunger for the Revolution. They have not held a strike in 80 years.

But now they are truly pissed off. Their union, IATSE, asked 60,000 rank and file members to endorse a provision which enabled their negotiators to call a strike, so 90% voted and 98% of those agreed. Those figures are remarkably high, and may be part of a growing wave of strikes across the exhausted, disenchanted US workforce. What is more, the Directors Guild of America, the Writers Guild of America, SAG-ACTRA on behalf of performers and the Teamsters are all very public in their support.

Is a strike possible? The employers, represented by the Alliance of Motion Picture and Television Producers (AMPTP) rushed back to the bargaining table. Within a day, the new concessions added up to ‘a big nothingburger,’ according to an official quoted by Variety.

Read: Unionisation for freelancers: why is it worth it?

The studios are used to finagling their way through as the Unions blink, their members burdened by mortgages and the fear of revenge sacking which poisoned the peace after other disputes. But they no longer have industrial experience in their corporate memory, they are desperate to make shows, and work forces are imbued with disturbing solidarity through Covid.

IATSE on the rise

IATSE, the International Alliance of Theatrical Stage Employees, represents 150,000 entertainment workers. The sixty thousand are covered by screen sector agreements with AMPTP, the Alliance of Motion Picture and Television Producers aka studios and streaming companies, which are up for re-negotiation.

According to IATSE, ‘Throughout the bargaining process, the AMPTP has failed to work with us on addressing the most grievous problems in their workplaces, including:

Both the Australian and US deals are brutal by the standards of most industries. Short term contracts and twelve hour days are normal. When you have to mandate a ten hour gap between calls so crews can sleep, you do not have a reasonable work-life balance. US producers coming to Australia are sometimes disconcerted and sneery because our work force is genuinely better protected. All those contracts and pesky laws actually do regulate behaviour.

I’m an Assistant Costume Designer in Local 892. Here’s a recent experience. My work day began at 6am to fit 20 actors who were cast the night before they had to shoot. Then the rest of the crew came in at 9am and the shoot began. It went on until 10pm and after collecting all the actors clothes, I was able to leave around 11pm. And I was expected to be back at 6am the next morning to do it all again.

After 3 days of this gruelling schedule, I almost wrecked my car on the freeway driving home because I was so exhausted. We IATSE members deserve to be treated like human beings. We don’t want to do die for someone else’s greed.

These examples show very clearly that the big issue is simply that the existing agreement is being flaunted. This one is awful.

‘In a way, I hesitate to share this story because its so personal, but our first AC miscarried on our last set in the middle of the day. She was back the next day. I couldn’t stop looking in her direction the entire shoot. Her stone face, her quiet and steady work ethic. I knew she was screaming inside. I hope you all scream for her. Strike.

So the union and its members are fighting to create a powerful presence which can be used to make sure that wages are not stolen, times falsified, meals ignored and insane schedules imposed at the last minute. While some producers are simply criminals, others will use fear and force to cover up their own shambolic behaviour. Make no mistake about it, the screen sector functions on sophisticated planning and time management.

But there are two issues which are endemic to the sector which are so obvious we can’t even see them.

The cost of cast

The true currency of deals is the names of the cast, and increasingly the directors and writers. The contractual system arms actors with agents and managers incentivised to raise the price. The market value of an actor helps to sell a show, and the quality of performance is fundamental to the audience experience. What is more, the number of performers and other key creatives who can provide that value is actually very low. That is why actors are dragged from accent to accent and country to country to make films.

But the system amplifies their bargaining power. They get fierce experts in their corner and financiers fetishise marquee names which drives their price up even more.

There is a fixed amount of money which can be spent on a production which is set by what it can make in the marketplace (which is often subsidised). If you pile that money in one place – name actors – it has to be taken from elsewhere. Any pile of wealth in entertainment and the arts sits in a vast puddle of poverty. And that is why most artists are broke – and in this case, crew.

The problem of complexity

Screen production is the most complicated artistic activity in society. Even intricate theatre shows or vast orchestras are rehearsing and then repeating themselves. Screen workers build and dismantle, then build something else and then dismantle, co-ordinating different combinations of craft, tools, substances and trades.

It is so monumental that the sector has in many places both a 10% contingency and an outside insurer on location. The people who succeed best are brilliant at knowing how long anything takes to do, where failure starts to happen, and how to organise different stages to happen simultaneously.

Let’s not forget that this is made even harder if the producers only have their actors for particular times. Because everything has to be built and scheduled around them, and they are both pricey and in demand.

So, the cost of cast encourages producers to screw the least powerful people in the process, while the problem of complexity is a lot easier if you can work them till they drop, at your own convenience.

In such an international business, it is no surprise that the industry unions around the world have formed a peak association, UNI-MEI, a section of the IAEA which represents arts and entertainment workers around the world. It is dry but important.

You can find the rank and file photos in the twitter feed for IATSE 600, which represents the cinematographers.

MEAA, the Australian Media Entertainment and Arts Alliance has unfurled its flag as well:

After a near-miss car accident on a Netflix production earlier this year, a MEAA survey showed that two in three workers have fallen asleep behind the wheel.

“IATSE is the biggest and strongest union in our global industry – dealing with some of the wealthiest and most powerful corporations on the globe. These companies have driven an unsafe long hours culture around the world, and they need to realise that it’s time for change.

“Making the incredible entertainment people love can’t continue to come at the cost of the families and lives of the people who make it.”

The last time IATSE was involved in strike action was the 1945 ‘War for Warner Brothers’, in which two unions duked it out for control. 10,000 members of the Confederation of Studio Unions called a strike, backed up by experience in the successful 1941 action on behalf of cartoonists. They were up against Local 37 of IATSE, controlled by Chicago mobsters who kept industrial peace for protection money.

The story is told by IATSE historians who clearly support the cartoonists and interior decorators.

By early October 1945 CSU was not just running out of money, it was running out of patience. Temperatures were at record highs and nerves were frazzled. CSU President, Herb Sorrell, decided to make a stand at Warner Bros. On October 5th, some 300 strikers gather at Warner Bros. main gate at 4 A.M. on a typically warm day during this pivotal month. Shortly thereafter, strikebreakers, Chicago goons and county police attacked. They were armed with chains, bolts, hammers, six inch pipes, brass knuckles, wooden mallets and battery cables. The county sheriffs marched two and three abreast, steel-helmeted and reinforced with tear gas masks, and night sticks, Some carried 30-30 Garrand rifles and two were weighted down with an arsenal of tear gas bombs. The Warner Bros. studio police lobbed canisters of tear-gas from the roofs of the buildings at the entrance.

It is indeed a story of ‘murder, intrigue, bribery, collusion and Communist baiting. A cast of characters that include corrupt union bosses, movie moguls, gangsters and trade unionists.’ The outcome was not good.

Ryan Westphal can be found on IMDB.