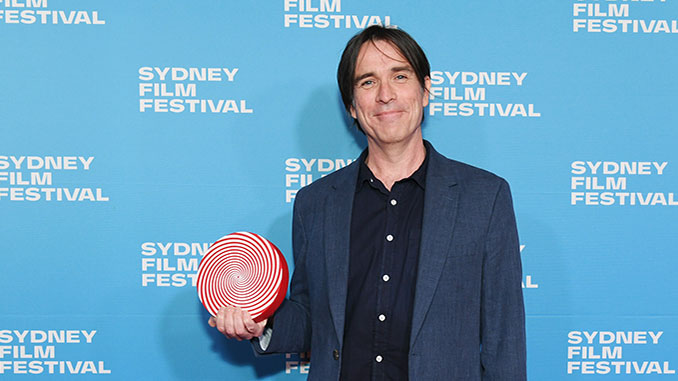 This was the closing night of Australian’s first major film festival to return to in-person screenings, and it was a celebration of survival on many levels. After all, the event had been postponed twice and opened just two weeks after COVID restrictions lifted in Sydney. Audiences had returned, albeit in cautious numbers. As Sydney Film Festival CEO Leigh Small said, ‘with COVID capacity restrictions and a smaller program, we were thrilled to see cinemas over 55% full and 52 sessions sold out.’

Festival Director, Nashen Moodley, said: ‘It was incredibly rewarding to witness elated audiences entering theatres, engaging in inspired post-screening discussions and completely immersed in powerful stories from acclaimed and emerging filmmakers from across the globe. This infectious enthusiasm extended to filmmakers and actors, including director Granaz Moussavi who got the chance to see her Oscar submitted film When Pomegranates Howl on the big screen for the first time and the many international filmmakers who provided captivating virtual pre-screening introductions.’

The prestigious Sydney Film Prize, which comes with $60,000 cash, and is given to an ‘audacious, cutting-edge and courageous’ film, was this year awarded to Iranian film There Is No Evil, by Mohammad Rasoulof.

Banned from making films in Iran, Rasoulof won the 2020 Berlinale Golden Bear for There Is No Evil, ‘a powerful take on the death penalty and its impact on Iranian society’.

The jury also awarded a Special Mention to Limbo directed by Ben Sharrock.

Accepting the award virtually from Tehran, Mohammad Rasoulof said, ‘I want to thank the jury. I am really happy there is something more than a simple appreciation in this prize. Being heard and understood is what keeps hope alive. Thank you Sydney Film Festival.’

Filmmaker Matthew Walker was awarded the Documentary Australia Foundation Award for Australian Documentary’s $10,000 cash prize for I’m Wanita, a no-holds-barred introduction to Tamworth’s renegade ‘Queen of Honky Tonk’ which follows her journey to Nashville to record an album.

This follows the film’s International Premiere in May at Canada’s Hot Docs Festival where Screen Daily listed it as ‘one of the 15 docs to look out for this year’, its award for Best Music Doc at London’s Raindance Festival in October, and a nomination for Best Australian Documentary at this year’s AACTA Awards ahead of a 6 January cinema release in Australia.

The doc jury, comprising Michael Cordell, Cornel Ozies and Catherine Scott, said in a joint statement: ‘As a compelling portrayal of a complex character I’m Wanita illustrates observational documentary at its finest. Made with great empathy, respect and intimacy it takes the audience inside Wanita’s world and her last-ditch effort to follow her dream to become the Queen of Honky Tonk on the world stage. At times she teeters on the edge and must overcome challenges, many of her own making, but this big-hearted film doesn’t shy away from difficult issues. The triumphant ending challenges expectations and stereotypes that an audience might bring to this story.’

2021 marks the twelfth year of the competition and the eighth year the prize has been supported by the Foundation. The winning documentary is Academy Award-eligible.

The $7,000 cash prize for the Dendy Live Action Short Award was presented to Peeps directed by Sophie Somerville.

The $7,000 Rouben Mamoulian Award for Best Director was presented to Taylor Ferguson for tough.

‘Peeps, our winner of the Dendy Live Action Award, is a soaring, operatic and highly original opus about a group of teenage girls flittering around a suburban mall.’

‘Freedom Swimmer, our Yoram Gross Animation Award winner, is a meticulous, powerful and poetic ode to the yearning for political freedom and the necessity of story to preserve the legacy of the past.’

‘And tough, winner of the Rouben Mamoulian Award for Best Director, draws us in with subtlety, surprise and heart to the life of a young rural tween.’

This was the 52nd year of the Festival’s short-film competition, which has been sponsored by Dendy Cinemas since 1989. Winners of the Dendy Live Action Short Film award and the Yoram Gross Animation award are Academy Award-eligible.

Filmmaker Darlene Johnson was awarded the 2021 Deutsche Bank Fellowship for First Nations Film Creatives. The Fellowship provides a $20,000 grant to an Australian First Nations film creative to further develop their skills through international placement or other professional development.

The first ever recipient of the inaugural $10,000 Sustainable Future Award, made possible by a syndicate of passionate climate activists led by Award sponsor, Amanda Maple-Brown, was Australian documentary Burning directed by Eva Orner.