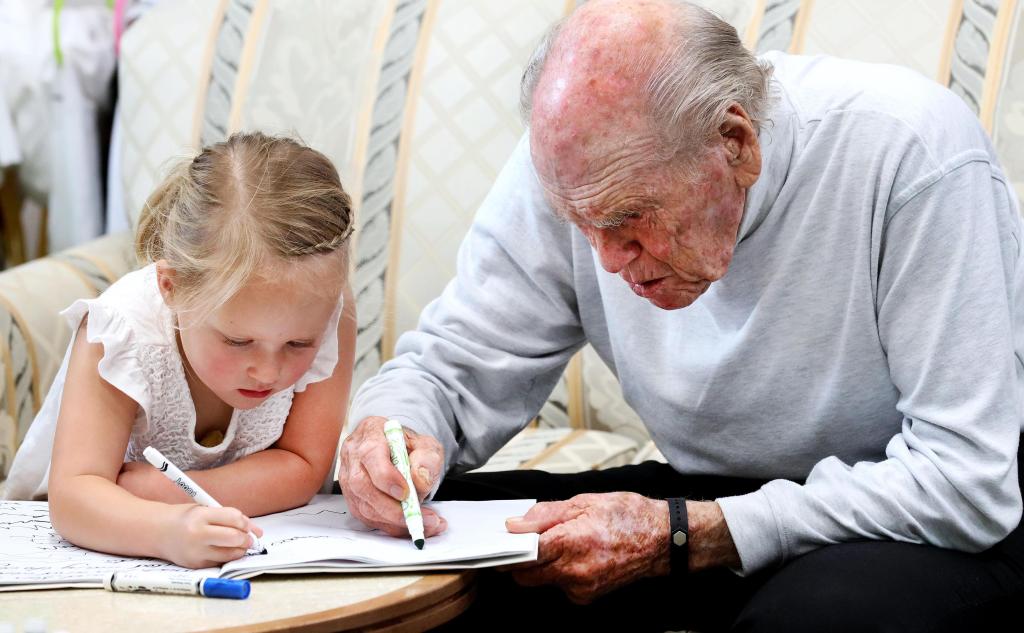 We’re an office full of screen-lovers. Every fortnight there’s an open call to everyone at Screenhub and ArtsHub to offer recommendations for TV shows, video games or podcasts they’re loving. Here are the latest eclectic picks, from heartwarming reality TV to hard politics and dreamy gamescapes.

This heartwarming five-part documentary series from Endemol Shine (Exec Producer Debbie Cuell) is based around a social experiment to see whether bringing together preschooolers and elderly retirement home residents can benefit both groups. Filmed over seven weeks, with experts in geriatrics and child development tracking the quantifiable and measurable improvements, the show has delighted our Content Director, George Dunford, despite some reservations. He writes:

‘Have we reached peak Crabb yet? Narrating this series that brings preschoolers into the hospice, gives Annabel Crabb yet another string to her bow as she brings together two generations in a charming program.
There’s much charm in this ABC show that brings intergenerational bonding to new heights as the older people (most in their 80s) meet the preschool class that cajoles them into socialising, playing and living again. The show picks out a few stars – retired tradesman Eric teams up with livewire Aidan with hilarious and heartwarming results – following them throughout the experiment. Of course the experiment is really just an excuse to throw together the generations and see how they get on. It’s a shame the show labours its points, with reality TV tilts at drama when Crabbe’s voiceover pushes a character’s loneliness, complete with overwrought music. It could also do without the psychologists watching screens of the action then drawing conclusions the audience has already reached. But it’s hard to go wrong with images of preschoolers charming the oldies and even the crabbiest have to admit to enjoying themselves.’

How Australia Got its Mojo (ABC iView)

This one-hour documentary about a legendary Australian ad agency won its 8.30pm timeslot when it broadcast on Tuesday night with 578,000 metro viewers. It comes recommended to us by our own Queen of Advertising, Jane Chisholm, who feels great nostalgia for the period. She writes:

‘If you want to see Australia as it was in the 70’s, lots of bare chested bronzed blokes in short stubbies guzzling beer, beautiful beaches where everyone sunbaked and Hoges this is a fabulous documentary. Russel Howcroft presents the meteoric rise of Alan ‘Mo’ Morris and Allan ‘Jo’ Johnston, the creatives behind the legendary Mojo advertising agency. It was wonderful to see the ads that are indelible in your memory if you are a baby boomer, and if not you’ll see how much fun advertising was in the old days. The story of Kerry Packer and the World Series cricket, which was only a success due to the anthem “C’mon Aussie, C’mon” is inspiring. Featuring legends John Singleton, Paul Hogan, Ita Buttrose and several agency personnel as well as Mojo’s Allan ‘Jo’ Johnson, it is a delight.’

This new 8-part Netflix series by Ryan Murphy, Brad Falchuck and Ian Brennan, the trio responsible for American Horror Story, Glee and Pose, is recommended by our Digital Product and Marketing Manager, Alex Lofting. He writes:

‘Spanish Telenovela meets the Broadway musical version of cult 90s movie Election. That’s how I would sum up The Politician, a series following Payton (Ben Platt), a rich, white, entitled and ruthless aspiring future President of the USA as he vies to first become student body president of his college. The series wastes no time throwing in every overwrought telenovela plotline: forbidden romance, suicide, murder, and even Munchausen by Proxy. Life in a Murphy/Falchuck- created universe is always a fevered mix of drama, camp and death so be prepared to suspend your disbelief. The same issues that plagued their previous shows are here, like plotlines flung into the mix to raise short term tension before being forgotten or left unresolved. If you’re not a fan of their previous work, then this won’t sway you to become one, however the strange mix is what makes the show entertainingly indulgent, and like those previous titles there’s a core message of giving voice to those underexposed and marginalised parts of society. The show has already been renewed for a second season, as evidenced by the clunky last episode that jumps forward in time and introduces new major characters such as Bette Midler and Judith Light as Dede Standish, a New York state senator. While not without its problems, The Politician is equal parts entertaining and cringe-inducing.’

American-Canadian actress, producer and writer created this half-hour CBC sitcom inspired by her own difficult transition to combining work and first time motherhood. The series premiered in 2017 and aims to comically reflect the real life struggles, stress and guilt of urban mothers. The show comes recommended by our Business Development Manager, Danni Petkovic, who is also a ‘workin mum’. She says:

‘Catherine Reitman writes, produces and stars and this is a showcase of all of her wild talents from comedic delivery to great writing, producing and sometimes directing. It’s a brave and brutally honest account of modern life and she cast herself in some cringeworthy scenes as a mother (the kind that few women would admit to privately let alone on a global stage). Nothing is taboo and there are lots of lols. It’s an engaging binge(cringe)worthy “my-life’s-not-so-bad-when-I-watch-this” modern tale of dysfunction and the tribulations of being a mom/mum. It’s so light and easy and is a perfect antidote to the nuts craziness or stress of a bad day at the office.’

Glitter, fake tan and naked ambition, this British reality TV show follows a married couple of former ballroom dance champions who run a dance school, Zig Zag Dance Factory in Wolverhampton, England, where they train passionate (obsessed?) young dancers as young as six years old. Some people have called it part Dance Moms, part Strictly Ballroom, part Toddlers in Tiaras and part Great British Bake Off, which sounds like a hell of a combination. Our own Membership and Classifieds Manager, Alana Morris, admits to being a little embarrassed about how much she loves Baby Ballroom, but says, ‘It’s a delightful romp of a show that follows competitive junior ballroom dancers. They’re gorgeous and hardworking kids and it’s the best junk-food for the brain!’

FriendlyJordies In Defence of Greta Thunberg

This pick comes from Screenhub journalist Rochelle Siemienowicz whose teenager insisted she watch it with him.  She says: ‘The FriendlyJordies YouTube account has been described as one of the loosest units on the Australian internet and it’s true. I often find it unbearably loud, offensive and silly. But sometimes it really hits the mark and I’m grateful my kid is watching someone in the Australian media who uses logic and a political science degree to crack laughs and attack neoliberalism and climate change denial. This video skewers the twisted logic and propaganda tactics directed at youthful environmental activist Greta Thunberg, including the use of her Asbergers and depression to discredit her.’

Screenhub’s Jini Maxwell has been playing and loving Mutazione, a Danish-Australian production by indie games studio Die Gute Fabrik. Jini wrtes: ‘You play as a teenage girl who decides to return to the mysterious island community of Mutazione to care for her sick grandfather. Here, the game introduces you to a gentle, surreal world with a telenovela-style branching narrative. You’re encouraged you to get to know the villagers, grow a garden, and sometimes, just to sit and listen to the sound of the trees. At times, its magic realist elements remind me of a Marquez short story. The art style is breathtaking, the narrative is welcoming and peaceful – playing it feels like finding a little oasis after a long day. I couldn’t recommend it more.’

Alana Morris says she’s been listening to this one with eager ears. ‘It’s a monthly podcast hosted by Jon Henley where he and his guests walk listeners through Brexit. With the October 31st deadline looming and parliament changing the rules from moment to moment, this months instalment is going to be a firecracker!’  Listen here.