Screen music ‘unlocks the soul of the film’

Screen composer and Guild President Caitlin Yeo and filmmaker Robert Connelly honour the mysteries of their linked emotional journeys.
David Tiley
[This is archived content and may not display in the originally intended format.] 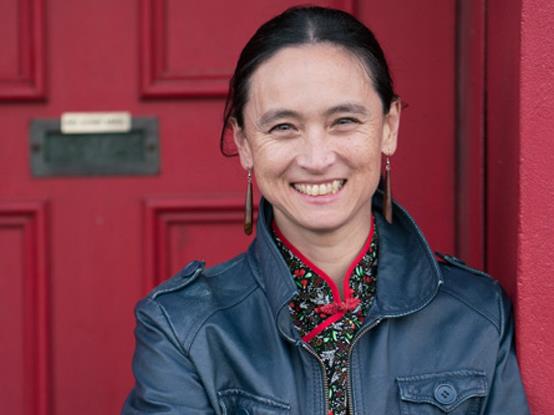 Image: Caitlin Yeo in a ceremonial photograph to mark her presidency.

‘Do you have time to talk?’

‘I’m here writing and after this I will go back to writing so it’s okay. I am always writing.’

Composer Caitlin Yeo received her first APRA AGSC Screen Music Award in 2007 for the Cambodian landmine documentary Bomb Harvest. Since then she has not stopped.

In complete contrast, this is the title music for The Rocket, which tells the story of two children in Laos.

‘When I grew up,’ she said, ‘I never saw one woman writing music for film, but the film that basically inspired me is that I was in love with My Brilliant Career. Sybilla was a pianist and played Schumann, and I played those pieces. At the end she chose her career over Sam Neill.’

Now Yeo is the President of the Australian Guild of Screen Composers. Her task, she said, ‘is to provide our industry with a female role model where we hadn’t had one before. And bring some sort of nurturing role to our industry for that. I am a film composer and a mum so I can’t help but want to nurture the things around me and now I have a lot of composers I am looking after.

‘Brett Aplin the Vice-president is excellent. He is a dad and works from home and does it incredibly skilfully and has a very strong nurturing side. We want to bring our community together. It is really, really important for us. We have to let down our walls a bit in the hope it will strengthen our industry and our relationships with each other.’

‘It is very very hard to keep getting consistent work,’ she said. ‘When we do, we have an opportunity to keep our composer muscles working and exercise all those little details which are your compositional fingerprint.’

The APRA AGSC Screen Music Awards feature a group of familiar names, often nominated for several projects, which are always mixed in with new names and musical voices. To Yeo, that moment announces the arrival of a composer who has created something which is a little remarkable, the beginning of a long journey to mastery.

‘It is certainly something you may have the knack for, but I don’t want to discourage people who don’t have the knack to begin with but come to it. This is a practiced craft, and I think that craft gets better with experience and age. So, I don’t want to undermine those people who have worked on it for years. They have served their apprenticeship. It is not just the knack but the wealth of experience and a lot of work consistently.

‘It is really nice to see some great consistent composers coming out of Australia. We’d love to see them get more recognition because we have world class talent and in a different cultural voice.

‘Inherent within composers, they bring their own filmic and compositional sensitivities to each film. Even if they are being influenced by something different they are still going to bring their own toolkit which will be made up by certain sounds and instruments they like, and certain harmonic progressions they come back to.

‘It is up to the creative gods and opportunity under difficult conditions but they have a toolkit and every production adds to it and it gets bigger and bigger and develops new ideas. And adds something new and bespoke and poetry as well.’

This year the APRA Board has given only the second ever Distinguished Services to the Australian Screen Award to producer, director and thinker Robert Connolly, He is in distinguished company because the inaugural winner last year was Martin Armiger, a composer and teacher who ran the course at AFTRS. It is designed to honour someone ‘including, but not limited to producers/directors, philanthropists, educators, music supervisors and event producers that provide promotion, opportunities and education for Australian Composers’.

Connolly has been a significant, assured and individual figure in the sector since the late 1990s; his titles include The Boys, Romulus My Father, The Turning, Paper Planes and the Gallipoli miniseries as producer, while he wrote and directed The Bank, Three Dollars, Balibo and Paper Planes, and directed The Slap, Barracuda and Deep State for television.

As far as the composers are concerned he is immensely supportive, knows how to work with them, creates fabulous opportunities and releases as many soundtrack albums as possible, inspired by Robert Patterson who championed them in the ABC and now works with Connolly at Arena Media.

He is a true pleasure to interview, poised, patient and full of ideas. ‘I’m profoundly flattered they have given me an award,’ he said. ‘I see it as an opportunity to thank composers.

‘Music has always been at the heart of my work and I’ve had that instilled in me by my parents and children. I have a passion for music and its power. And also it’s great fun working out how to score the film or TV show. I’ve had great pleasure in the exploration of sound.

‘I remember Nigel Westlake recording the music for Paper Planes with the Melbourne Symphony. I was there, it was happening in front of me. Nigel was conducting, finding some emotions I couldn’t comprehend in my film. It is a gift for me, I just find it so invigorating.’

On Balibo Connolly worked with US composer Marcello De Franisci and the remarkable Australian vocalist Lisa Gerrard. He reflected on the way that Gerrard’s work ‘unlocks the soul of the film. Music opens up something quite profound in an audience and it burrows very deeply into a work in ways that I can’t quite understand how composers do it.’

‘I loved working with Bryony Marks on Barracuda and using her insights to explore this young swimmer and finding a way with music to find out what is happening beneath the water. We had Olympic swimmers come and say this is what it feels like. And Bryony’s music is helping massively in the sequences.’

There are tracks of her music here.

‘The creative impact of the composers on all my work is so significant. I am trying to see myself as a humanist filmmaker applying the microscope to the human condition and I can’t do it without music.’

I had to ask Caitlin Yeo the inevitable question: how come the composers’ guild is so dominated by men?

‘The feminism thing! I am the seventh president. Of those seven, six have been men. The current statistics show 13% APRA screen composers are female. So me being one in seven presidents is about on par.

‘This is my 15th year in the industry. I have received opportunities and accolades. Fortunately, I have never felt shut out or  sidestepped or treated in a sexist way. But it does say something when you see an industry that only has 13% women and 87% men.

‘It is not only that women are being shut out or don’t have the skills. I would absolutely say women have the skills and the tenacity, the drive and the creativity to make incredible scores for film. Maybe there are not as many women trying. As Geena Davis said, “If you can see it, you can be it”. I would encourage more women to get out there and give it a go.’

Screen composition is a very specialised career and takes a precise sensibility, which is driven by pictures and visual rhythm, and pulls fragments of music into a much larger thematic whole.

I think the moving picture crafts of sound depend on a love of the audio universe which is shared in every successful project. We were talking about the way music affects our sense of the moment – that feeling for instance when you are driving at night and it’s raining and music is playing.

Caitlin Yeo said, ‘The rain on the windscreen is thousands of tiny sounds of different lengths which create the overall texture of the piece.’

Here is the piece of music which the character of Sybilla played in My Brilliant Career which probably started Caitlin Yeo’s fascination with composition.

This article has been slightly re-edited for clarity.