Screen Forever: on the hunt for answers

Screenhub is on a mission at Screen Forever. What do we want to know about, from our unique industry perspective?
David Tiley 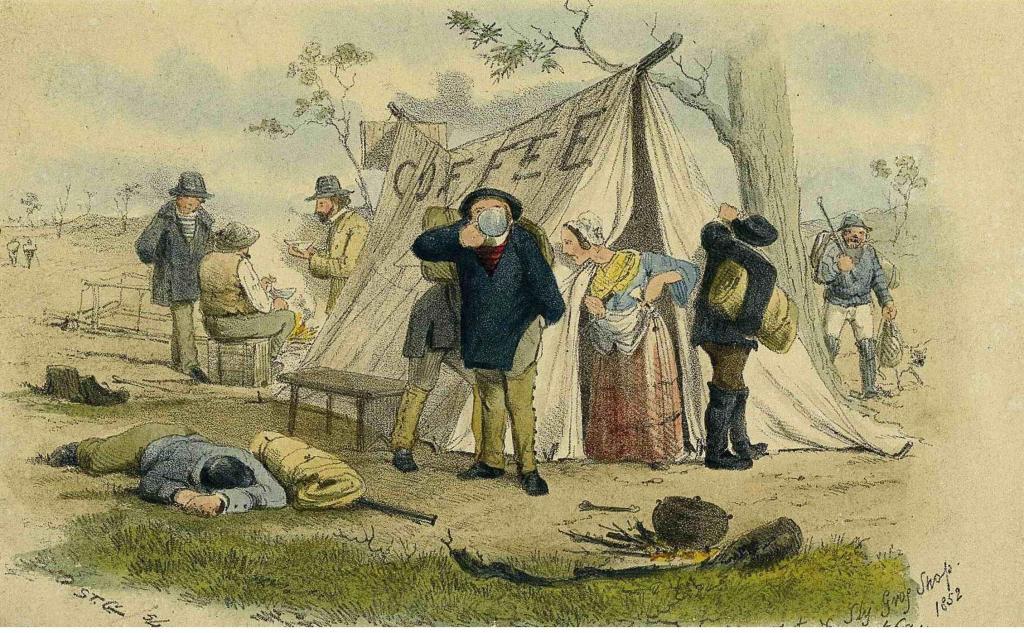 A group of interstate producers on the way to Screen Forever, hoping to strike a rich vein of knowledge. Image: Ballarat Goldfields Museum, S.T. Gill, The Sly Grog Shop.

For nearly twenty years Screenhub has covered each annual Screen Producers Australia conference in detail. For 2019 delegates will discover editor David Tiley (me) and Rochelle Siemienowicz in sessions, doing interviews and getting to know our members’ concerns.

There will be a burst of stories during and soon after Screen Forever, and then a slower rollout of more reflective material between now and the end of November.

What are the broad areas of interest we will take into the conference, as we tell the larger story of the screen sector as an industry, a cultural force and as an art form?

Screen Forever has achieved one really substantial coup this year, though it may seem inevitable to the players.

In its new open incarnation, these people should be able to tell us more about the terems of trade,   and discuss the possible future of Netflix deals.

We want to know how Netflix intends to deal with the pressure to compel Australian content by regulation. More generally we may be able to work out more about the streamer’s long term view of the sector. Will it simply keep fragmenting? What will happen with Disney? Who will eat who in the next round of mergers?

We are hoping to hear that Netlfix can become a settled partner of the Australian industry at a scale which compensates for the declining broadcaster finances. And that Netflix will pay enough to allow our companies to work on true blue chip, and that the company will diversify its tastes.

We think that Australia has come late to the genre party due to the peculiar nature of our national tastes. There are plenty of sessions this year focused on writing, while the panel on telling genre stories through diverse lenses could be a standout of the conference.

Let’s face it, the single most popular segment in streaming around the world is fantasy and science fiction, detective and crime series require specialised plotting skills, and rom-coms are financially really risky but rewarding. The rise of family friendly projects fits our national sensibility and is embraced by audiences, but they are easy to fumble.

Do we now have an infrastructure of development that can support us into genre at the highest level? Can we raise the budgets to take advantage of it? How can we be more original in formula-driven sectors? Can we work easily with overseas companies who live and breathe particular genres?

There are plenty of them.

Banker, cyclist and money minder Paul Anderson is the CEO of Network 10. While Nine and Seven are pretty well defined, the third network is an enigma under its new owner, CBS. Will it do the same old same old, or is there a rabbit waiting to come out of a hat? He fronts the conference with a keynote.

Mike Sneesby is the CEO of Stan Entertainment, which corralled 1.5 million subscribers in four years and is creating Australian content to create cut-through and tell us it is an Australian company thank you very much. We think Stan refused to wander off and die and is a real wildcard for the future.

Stuart Baxter, the President, International Distribution for eOne runs the company’s sales team. The company has been centralising itself and hiring new people, all under Baxter’s watch. He will be in conversation.

Keshet International, the Israeli outfit benefitting from its strange broadcasting laws, came to an AIDC as rapidly growing TV games company, for which it had a clear strategy. Now it has become a network of seven prodcos with hubs around the world.

Kelly Wright is the Senior Vice President of Distribution and New Business and will run a case study on Our Boys.

Paul Fletcher, the Minister for Communication and the Arts is not deliciously spontaneous. He has probably been threatened with Dame Smack if he steps out of line. But we are hoping for an amiable encounter in which we become more aware of the sector as a creative force, and the lobbyists learn more about his personal interests.

There is a strong acknowledgement of the diversity changes, from gender to culture to disability. Each year the sector gets an informal report on the state of play and we reaffirm the sector’s commitment to accessing talent and reflecting the lived experience of a multicultural society.

The question is: are we seeing the changes, when we are also watching a changing of the generational guard?

Does the domestic film industry exist for Screen Producers Australia? There is not much there. We have seen some institutional change to reflect the new ways of reaching the market, but that is surely the beginning of something much larger.

How do we make budgets match our markets? How do we make more ambitious films from our current scale and mix of companies? Can we really get on top of genre? Is it possible to put Australian films back into local television? What about the brain drain? Should we run Screen Australia from Los Angeles? (that one is a joke).

How big should our local cinema industry be? How specialised? We could go on forever.

The rise of new age groups and world views is never discussed as such but it is very important. We try to track the demographic realities of the sector and keep an eye out for change from snoozing veterans to impatient young producers kicking shins to make a point.

We are looking forward to meeting new people, looking our telephone friends in the eye, and listening carefully to the personal stories that really chart our changing time.

One thing we really want everyone to know. Rochelle is a truly expert reviews editor, and we have abandoned our long tradition of avoiding reviews because we don’t do them properly. We now cover Australian productions with care and respect, and I am thrilled at how it is turning out.