Darcy Yuille has worked on crews and taught camera techniques for twenty years. Here he builds an aesthetic and development process based on smartphones.
David Tiley 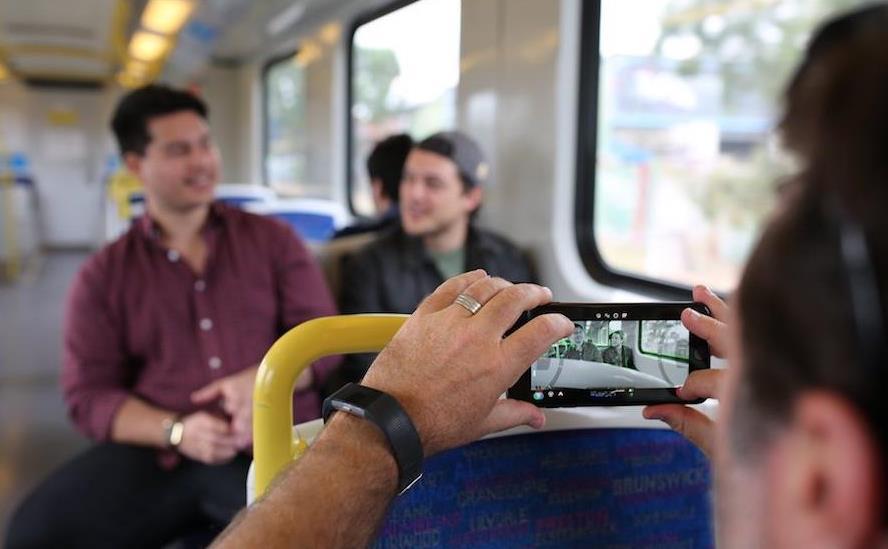 The smartphone, now working in 4k and slo-mo, is far more than a substitute for a ‘real‘ camera so emerging creators can develop their skills. In a neat illustration of artistic discipline, it is a separate form of cinematography with specific advantages.

They change the relationship between the filming process, the performers and the space around. With the right lenses they create a valuable look of their own.

Darcy Yuille, a twenty year veteran of the camera department who started on the Gold Coast as a camera assistant, took his kids to play football and somehow became involved in a brawl started by other parents. It left him shaken and ashamed and awash with a sense of  masculine violence.

This crystallised into One Punch, a street level indy film about a bunch of kids on the prowl for fun one Friday night, who are caught in a vortex of aggression which destroys lives forever. He decided to shoot on an iPhone 8S in 4k.

As Yuille told Screenhub, ‘You can have a very sophisticated approach to using mobile phones as a cinema aesthetic.’  What is more, he doesn’t accumulate the mass of a conventional shoot, where even nimble crews add a tripod and then a DoP and then more lights and a gaffer for them. Meanwhile you have a production manager to get the space and the permits. Stay modest and a shoot can mingle with the crowd, moving from character to character followed by a boom and radio mikes. Even then, the outsiders will think it is just friends mucking around with a smartphone.

Cameras can be tucked into the corners of a location, or whirled around to follow action, or multicammed into a swarm of lenses. Add an anamorphic lens over the stock plastic bubble and the camera squashes a stretched image in a sci-fi version of a wide screen horse movie.

Darcy Yuille was inspired by Tangerine, which burst out in 2015 to win no less than 25 prizes in the indy and adventurous film festivals. The name of creator Sean Baker is threaded through almost every department of the film, which cost around $125,000, using three iPhone 5S smartphones.

‘That look is amazing because it’s actually happening in the lens before it gets to the sensor’, said Yuille. ‘So you’re squeezing a wider image onto a square sensor and actually getting that great kind of frame so you can get a close up and still see stuff happening in the background.

‘You are restricted a little by that, as the close-ups are quite distorted. Because its got that 4k ability we shot on a spherical lens, putting a better piece of glass in front of the camera lens to get a bit closer in a more cinematic kind of frame. And then you’re restricted a little bit by that. And then we have to just chop the top and bottoms and it doesn’t look too bad.

‘We treated it like a cinema camera so it was about very simple lighting, film lighting.  It’s all generally shooting nightclubs and things like that so we could really embrace LEDs, because that’s what they look like. And when you blow up smartphone footage and put grain in it does start to look like rough 16mm.’

Smartphone cameras are ideal for quick moves and neurotic rhythms, but Darcy Yuille deliberately kept the scenes stable up front, with events happening within a tableau. As the story jitters around the camera becomes more kinetic until it is sitting at the centre of the action.

‘Adam Arkapaw is probably to be blamed for this, with ropey focus and shifting, with wonderful nice cameras doing things out of focus, which he does beautifully. But every film student is doing it now.’

The goal, he said, is to show the film in the cinema, sustained by proper post production and sound. ‘I’ve seen One Punch a couple of times on the large screen and it stands out and works, maybe because there’s subtleties in the frame.’

To demonstrate the shooting methodology. Darcy Yuille split screened some rushes with observational material showing how they developed with the crew and the crowds.

Yuille has worked for many years with Melbourne with the 16th Street Actors Studio set by Kim Krejus inspired by acting teacher Uta Hagen. They are an adventurous crew, who experiment with the methods of British director Mike Leigh who has turned improvisation into a source of ideas and authenticity over a lifetime of work in theatre and film. His best known project is Secrets and Lies.

Leigh starts with carefully selected actors with whom he works one on one, building them characters based on people they already know well. As they develop a coherent performance they are sent off into the world to be that person in ordinary situations until they share the same nervous systems.

With the characters developed, Leigh introduces them to each other and they work through scenarios which develop a story, so the actors move forward without knowing at any time how it will turn out.

This kind of improvisation relies on great truth and willingness to take risks. Unlike many stories told within a loose framework with lines created on the spot, Leigh creates the scenes, blocks them carefully, records the lines and turns the whole thing into a script with all the control and metaphorical rigour that implies.

Armed with his story of male violence, Darcy Yuille pondered his own approach to improvisation until he found Alex Arco on his screen, deep in his training. “I watched the rushes and thought he had something. He was young and kind of beautiful, but he also had a ragged edge and there was something boiling under him. He was just so interesting to watch.’

They worked on the character and brought in thirty or more of Arco’s contacts and winnowed them down to a key ten.

The two resonated, and the cast grew to build the stories and the performances. Again, they built on memory, created fully formed people and went out into the world in an extended game of let’s pretend. By the end, Darcy Yuille had the dialogue and scenes he needed so the shoot could be properly rehearsed and carefully blocked within the looseness of the action.

Aside from anything else, the production is responsible for safety which limits the options pretty sharply.

In a sense these were the easy bits. The cut was nightmarish as Yuille had to reteach himself old editing techniques and come up to speed with changes, supported by wiser heads. ‘I’m editing it all on a laptop and I had to  completely re-ingest everything and recap manually because the proxies wouldn’t connect to the master footage and I had to learn the proper way of doing it. And that set me back a couple of months. ‘

While the actual shooting can be a mad, meticulous rush, a lot of the work around it  requires enormous patience and tenacity, long after the adrenaline has died away. Financing, even on low budgets, is a nightmare.

‘We sat down as a family and I said, “Look, I don’t want to die wondering about never making a film. I think I’ve got a way of doing it inexpensively.”’ He did, sort of, but he raised money through teaching film, and cutting in the gaps.

Now they have done the picture lock and are out in the wilds of the sound track. With the Sixteenth St Studio people, the development team, the shooting partners and a relieved family, it should be a great cast and crew screening. After that, exhibition is a whole new game.

One Punch was produced by Yuille, Sher-Li Tan, and Margaret Tillson, with Lisa Leong as executive producer.