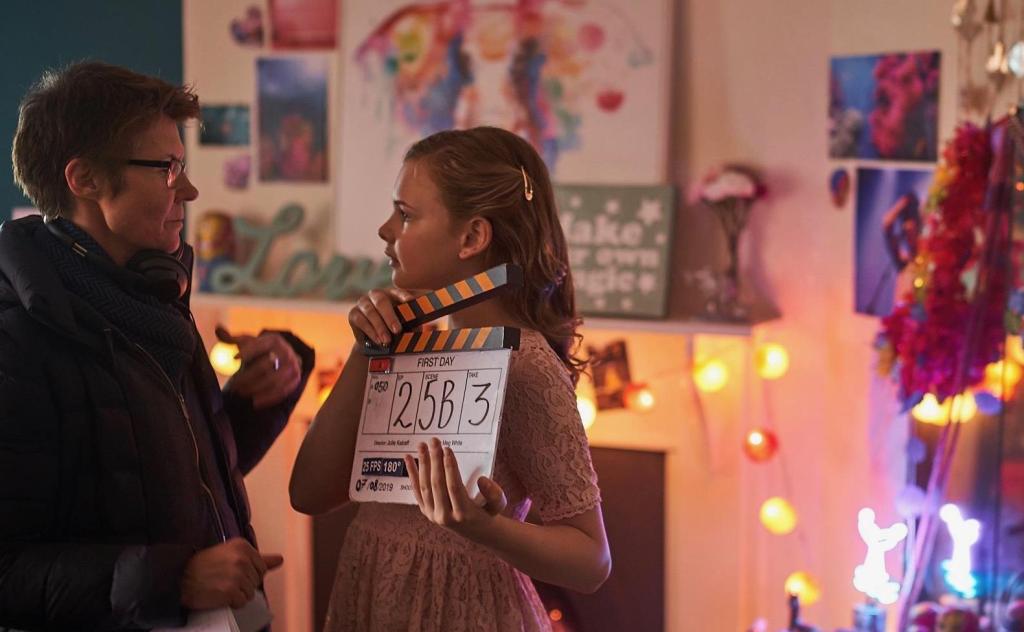 Julie Kalceff and Evie Macdonald on the set of First Day, courtesy ABC.

Speaking on the phone from lockdown in Sydney, writer-director Julie Kalceff feels incredibly fortunate. Her four-part kids’ series First Day was shot in Adelaide in July last year, and premieres on ABC ME this week.

‘I really feel for all those people whose films were getting into festivals and now can’t screen, and all those productions that have shut down,’ she said. ‘We’re lucky it hasn’t affected us much, apart from having to do cast and crew screenings by Zoom. In fact, more kids will be at home now watching TV than they were before.’

Produced by Kirsty Stark and Kate Croser, First Day is a 4×30 min show about about a 12-year old trans girl starting high school and having to deal with the many issues that arise. These range from not being allowed to use the girls’ bathroom, to being bullied and outed on social media, as well as the normal terrors of entering puberty, making friends and being the new kid at school.

The show stars trans actor and model Evie Macdonald, who many will recognise as Australia’s most visible trans kid, having appeared on TV shows like The Project in response to Scott Morrison’s comments about ‘gender whisperers’ in 2018.

Macdonald also starred in the one-off standalone episode of First Day, also written and directed by Kalceff. That 20-minute piece of television, made by the ABC in 2017 to commemorate the International Day of the Girl, went on to win the MIPCOM Diversify TV Excellence Award for Kids Programming, and the Gender Equity Prize at the prestigious Prix Jeunesse International Children’s Television Festival in 2018.

The origins of First Day

Previously, Kalceff had never made children’s television. She was best known as the creator of the low-budget lesbian web series, Starting Now, which has had over 130 million views in 230 countries.

She remembers seeing the callout from Screen Australia and the ABC in 2017, looking for pitches for 20-minute standalone episodes that had a female protagonist and were aimed at girls. ‘Initially I dismissed it. After all, I’d spent the past past three and a half years making five seasons of a lesbian web series that was definitely not children’s television! But something stuck with me. At the same time, a six-year-old child of a friend was transitioning, and I knew her mother was trying to do the best to support her and she wasn’t sure what that was. [These parents] didn’t known anyone who was transgender and they felt very alone. I thought, “Wouldn’t it be great if there was a kids’ television episode about a trans girl, so they could watch it and not feel so bad?”.’

Kalceff put together a one-page pitch and sent it to Adelaide-based Kirsty Stark (Wastelander Panda: Exile, A Month of Sundays). They hadn’t worked together before, but had met through both being makers of online web series. Stark read it and loved it, and they sent it through to the ABC.

‘I didn’t for one minute think that they would do a story about a transgender girl for children’s television,’ Kalceff remembers, ‘but they did, and Libbie Doherty, who was then commissioning editor and now head of children’s television production, said that they were wanting a story about a trans girl but didn’t want to put that in the call, because they thought if they did they’d get all these stories that were trying to exploit that fact, being opportunistic, instead of telling a story they really believed in.’

It was always essential to cast a real transgender girl in the lead. The idea of finding a 12-year old actor who fit that bill was daunting, but when Stark put out a call on her Facebook page, the post got shared 350 times and 12 girls applied for the role. Kalceff skyped with the girls to narrow it down.

‘Some of them, it was very sweet, thought it might be a good way to come out to their friends on television,’ she remembers. ‘So I spoke to them about the reality of that, and a few of them pulled out. We then had six girls who did a screen test and Evie Macdonald was by far the best. Her mum Meagan had rung me beforehand to make sure that it was all legit and wasn’t trying to exploit the story of a kid. Also Evie and her family had been on Inside Story so Megan had sent me that story to watch. Evie was young, about nine then, but you could already tell that she was a natural in front of the camera. We knew that her family was out. Meagan runs support groups of parents of trans kids, so we knew they were in a good position to deal with anything that came out of it.’

Kalceff has nothing but praise for the young actor, and says, ‘the power of storytelling is that it’s an opportunity to create empathy and perhaps change people’s minds. For some people it might be their first exposure to a transgender person. And looking at Evie, she’s so wonderful and engaging that you can’t hate her or see anything other than this gorgeous kid.’

She also notes that the young people involved in the show are all very much protected from any flak, and the ABC are ‘very big on issues of duty of care.’

After the screening of the standalone episode in 2017, there was a little bit of controversy. Kalceff remembers a couple of articles in papers like the Daily Telegraph and The Australian, ‘saying things like “taxpayers money is being spent on a story of a transgender girl”. The ABC knew they were coming, and Meagan knew it was coming, and to be honest, you’d probably be a bit disappointed if you didn’t get that pushback. If we’re not making stories that push some buttons then what are we doing?’

She says the angriest people are in the conservative Facebook groups where they feed off each other’s rage.

Someone there even shared my photo,’ she says. ‘Evie doesn’t see any of that. Meagan protects her. The parents cop it more than the kids because people see it as a form of child abuse and believe there’s no such thing as being transgender. Whereas the reality is that if you don’t support your child through transition, odds are that they’re going to end up committing suicide or suffering from depression because they’re forced to live as someone that they’re not.’

The ‘luxuries’ of shooting for a broadcaster

Kalceff says that with her background in making a web series outside of traditional funding, she was used to being nimble and resourceful, so having a broadcaster attached brought new resources, but also new responsibilities. ‘When I’m shooting a web series in my house, I’m not answerable to anyone, but when you’re working with a broadcaster you have all these people you have to be accountable to, more investors, more sets of notes on each draft of the script.’

She says what helped her in this process was having a producer she’d worked with before, and having Amanda Higgs, who was the script editor.

While the standalone episode was shot in Sydney on a very tight budget of $80,000, moving to Adelaide with a series proper, for the ABC, brought with it a larger though still extremely modest budget, which nevertheless allowed for some luxuries, like a casting agent and location scout. A key location proved to be Marryatville High School, where Stark went to school.

The move to Adelaide came because, ‘we had ABC, Screen Australia, Australian Children’s Television Foundation on board, and we needed that state funding body and Kirsty’s in Adelaide and she has a great relationship with the SAFC. Courtney Gibson was CEO then, and I knew her from when she was at Screen NSW, and she was very supportive and welcoming and loved the story.’

A 23-day shoot in the middle of winter 2019 was tough. A key priority was shooting around Evie Macdonald’s needs as a 14-year old who could only work 8-hour days and needed to be in almost every scene. An 18-year old stand-in helped a lot. Meg White, the DP, worked hard to create a shot list that supported the young actor but didn’t overshoot or exhaust her.

The look of the show

Having a female DP was a priority, as the filmmakers wanted to give someone her first TV credit. ‘Often people complain there aren’t many female DPs and they can’t give someone work who hasn’t done TV yet, and now Meg she has, and it was fully deserved and she was ready for it.’ The brief given to White was to keep things realistic and based in reality.

‘I think sometimes with queer content, it’s over stylised, and then that puts the audience at a distance. It says to them, on some level, “we’re watching a show about a Queer.” Whereas, I wanted it to really speak and feel like it was grounded in reality so the audience forgets that and just engages with the character and has empathy with her as a person. At the same time, I wanted to elevate it, and not make it look like cheap over-lit television. Meg was great with that, she lights things beautifully.’

Trust: what shows do I want to see?

As for what’s next, Kalceff says she’s writing a second series outline for First Day, just in case that’s called for. ‘Because we’re working with kids, if we want to do another series we have to be quick because they’re all growing up. Evie will be 15 next month. If there is an opportunity, the more prepared we are the better. If we leave it too long she’s going to be able to drive herself to set, which is too old to play the character!’

She also has a feature script she’s working and a couple of other series. Her advice to other writer-directors struggling to make TV is all about trust: ‘What keeps me going is to trust that there are people out there who want to see these kinds of stories. Trust that there is an audience who is under serviced and who is looking for stories they haven’t seen before.

When I left film school, I spent a long time trying to write shows that were already on TV and that was my biggest mistake. From the beginning I should have asked, ‘”What shows do I want to see? What stories do I believe in?” It was only when I started doing that – ten years after I left film school – that I started to find an audience and get things made.’

First Day. Episode 1 premiered 30 March. Ep 2 airs 31 March, on Transgender Day of Visibility, on ABC ME and iView from 4:30pm.