The lobbying worked. The government's plan to reduce the 40% rebate for the feature sector has been abandoned.
David Tiley 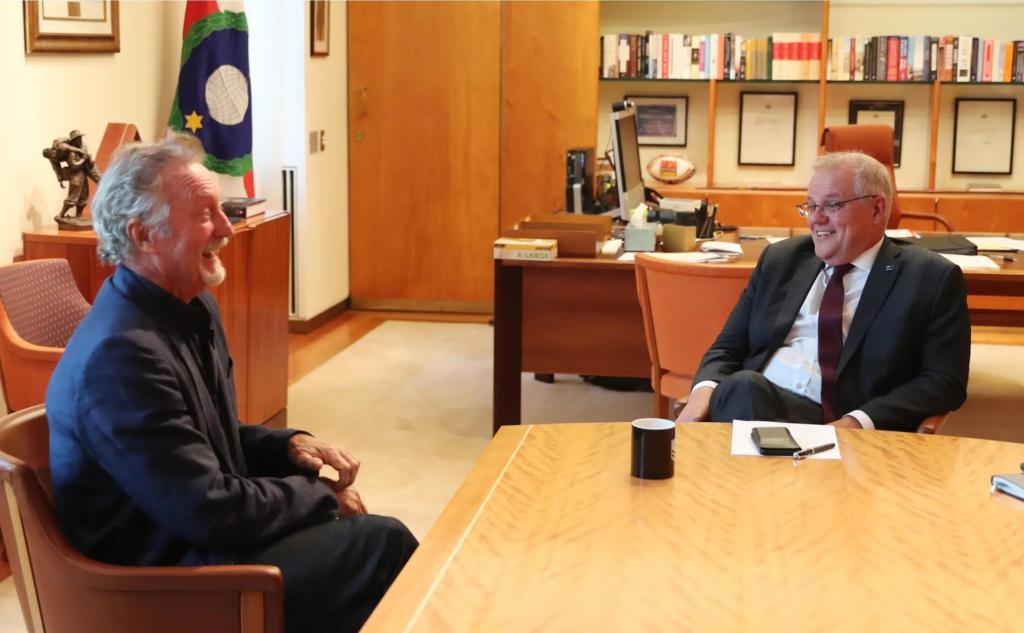 Bryan Brown charms a vital audience of one in Scott Morrison’s office, documented by an official photographer on February 24

The federal government’s plan to reduce the 40% rebate for the feature sector has been abandoned. Here is the announcement, clearly and simply on the website of Paul Fletcher, the Minister for Communications, Urban Infrastructure, Cities and the Arts.

So the industry gets the best of both worlds. The government will also continue its insurance guarantee.

‘The highly effective $50 million Temporary Interruption Fund (TIF) will be extended for a further six months, to provide coverage for productions that commence principal photography prior to 31 December 2021.’

A dire loss has become a win. The government gets rid of a potential problem with a minor change which has no impact on the larger media corporations, and continues the insurance guarantee which hasn’t cost a cent and was expected anyway. Fletcher can focus on his larger problem of regulating the streaming companies, and convincing the free-to-air companies and the ABC to surrender spectrum which he wants to sell to create a new production fund. Screen Australia will not have to face pressure to cover the halving of the film rebate. Ditto the state agencies.

Best of all, feature film remains a plausible strand in the slates of Australian production companies, which is vital for a host of reasons.

There has been a persistent thread of neatness in the government’s policy, which it calls ‘harmonisation’. It wanted both sectors to have the same rebate and ended up with a regime in which the numbers lined up with the support to the international sector. Because the rebate is part of the Tax Act, it needed to pass legislation which it could have lost in the Senate. For financial reasons it needs to bring in the 30% for the televisions sector on a neat, defined date which it set at July 1. So the clock was ticking on a parliamentary standoff in full view of the press gallery.

What is more, the industry’s lobby strikes on Canberra included all the cross-benchers. The possibility of a Senate standoff was no mere hope. Better to retreat and legislate some deharmonisation, knowing that no-one will oppose this particular legislation now, which after all offers a subsidy to commercial broadcast television.

The diplomacy was always a balancing act, because the government could respond by returning to the status quo, which would have reduced the television rebate to 20% again and set the industry against itself. The fact that the government did not default to this simple position suggests that senior ministers finally understood that the screen sector is not one unified business with common strategies. There is no single mechanism which works.

Diligent mainstream journalism by Karl Quinn of the Age/SMH/Nine group established the crucial role of the Parliamentary Friends of the Screen Industry and its relationship with the Make It Australian campaigners representing the sector and its various lobbying groups. Bryan Brown knew the Nationals Deputy Leader David Littleproud as a former chair of that group and tickled him on the phone in January. Two lobbying assaults on Parliament followed.

The campaign became bizarre in February, according to Quinn.

‘In the last week of February, Brown, Deaner and Wiegard went to Canberra to lobby politicians in person. There was no meeting lined up with either the PM or the Treasurer, but after Liberal backbencher Trent Zimmerman, now chair of the Friends of the Screen Industry, posted a video in which he and Brown debated who should play Frydenberg in a film about his battle with Facebook – “Josh is coming out on top,” Brown said, “he’s tough” – word spread. On the 24th, they got separate meetings with the PM and another with the Treasurer after space was suddenly cleared in their respective diaries.’

We now know that the lobbying occurred at exactly the right time. These events are built around some diary appointments, but a lot of business is done on the fly, as members and advisors are caught between their own engagements. The atmosphere was unusually friendly because COVID reduced the population, squashed a lot of business and left the corridors of power a bit creepy. It happened just before the government was caught in its sex scandal firestorm.

The Nationals broke with the official government position to pass a motion supporting the 40%, the ALP did its bit, along with Sarah Hanson-Young who has been a vocal supporter of the sector in public.

The industry has been racing to put films into production before the cutoff date of July 1. Television will continue to wait until then, so there could still be a traffic jam around the middle of the year.

And Minister Fletcher will be doing a happy dance around his office.