Outside the door it is life and death stakes. Indoors we want a break.
Rochelle Siemienowicz 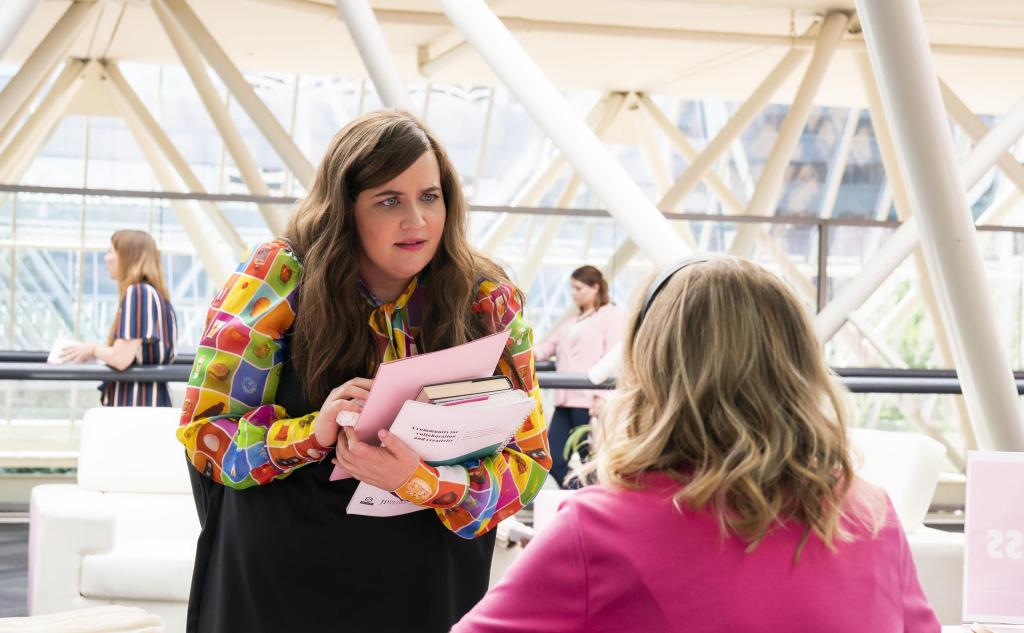 Remember when we worked in offices, with other people? Aidy Bryant in series 2 of ‘Shrill’. Image via SBS.

In a fit of social distancing desperation, I put out a call out to my vast network of screen content bingers: Give me your favourite feelgood dramas and comedies. No Walking Dead, Chernobyl or Dark Mirror, and definitely no murderers, rapists or Scandi Noir detectives.

One hundred replies later, certain titles kept popping up. Some of them I’ve seen, others I’ll sample in the long months ahead: Crazy Ex-Girlfriend (Netflix), Derry Girls (Netflix) – this one came up a lot. Succession (Foxtel), Marvellous Mrs Maisel (Amazon Prime), The Morning Wars (Apple TV+), The Good Place (Netflix) and Australian favourite, No Activity (Stan).

Not quite comedy, but also recommended as good fun were: The Young Pope and The New Pope (SBS On Demand), The Stranger (SBS On Demand) and The Mandalorian (Disney+), especially episodes directed by Taika Waititi. Not quite scripted drama, but also ‘a happy place’, was the gameshow Taskmaster (Foxtel Now) with UK comedians competing through bizarre tasks.

The comedians may prove almost as important as doctors to our survival.

Personally, here are five shows I’m watching and loving. There’s a definite theme: sex, relationships, adolescent awkwardness and diverse coming of age. Perhaps it’s nostalgia for a time when matters of the human heart were more important than the news of the day. Or maybe it’s because I’m watching them with my own bored teenager, who recommended some of them. In the absence of actual friends, they’re good company.

Socially awkward high schooler Otis (Asa Butterfield) lives with his sex therapist mother (Gillian Anderson) and makes use of his unique upbringing to give sex advice to schoolmates, while also navigating his own social and romantic hurdles. Hilarious, educational, compassionate and superbly written and performed, the two seasons of this show (created by Australian Laurie Nunn) are a joy in every way, and ideal for both teenagers and their parents.

Created by Irish comedian Sharon Horgan and American comedian Rob Delaney, (they also star), this show kicks off when a one-night-stand and accidental pregnancy leads into marriage and long term domesticity. It’s a show that feels borne from frank observations of what it’s like to live inside a family with young children: the horror and the heartbreak, but also the laughs. All four seasons are available to binge.

If you’re one of the few people in the world who hasn’t fallen in love with Phoebe Waller-Bridge’s dry humour and tragi-comic bravado, now’s the time. The story of a young London woman dealing with grief, making a mess of things, and frequently speaking direct to camera, it’s a truly unique piece of television, and deservedly award-winning. If you like Fleabag, also look up Waller-Bridge’s previous show, the delightful romantic comedy Crashing (Netflix). That 2016 series featured a group of 20-somethings living in an abandoned hospital and it was a much-lamented single season of madcap romantic comedy.

This heartfelt show about a suburban American family is real comfort viewing, but never lazy and frequently enlightening. Created by Robia Rashid, it follows Sam (Keir Gilchrist), a teenager on the autism spectrum who decides, with help from his therapist, that it’s finally time to start dating. His overprotective mother (Jennifer Jason Leigh), sporty neurotypical sister (Brigette Lundy-Paine) and confused dad (Michael Rapaport) all have their own struggles to accommodate the change.

Based on Lindy West’s memoir Shrill: Notes from a Loud Woman, this series follows a young woman who wants to change her life but not her weight. Aidy Bryant is utterly delightful in the central role, dealing with men who want to sleep with her but don’t want to appear with her in public, a mother who nags constantly about her diet, and a blatantly insulting boss (a standout performance from John Cameron Mitchell). Despite heartbreak and shame, this remains a upbeat and heartwarming show about friendship, work, sex and acceptance. Two series are available and the half hour episodes are extremely more-ish.