Branded entertainment forges on with charismatic megafauna, a passion for the planet and a bunch of sports tragics. This is the story of a company called THIS.
David Tiley 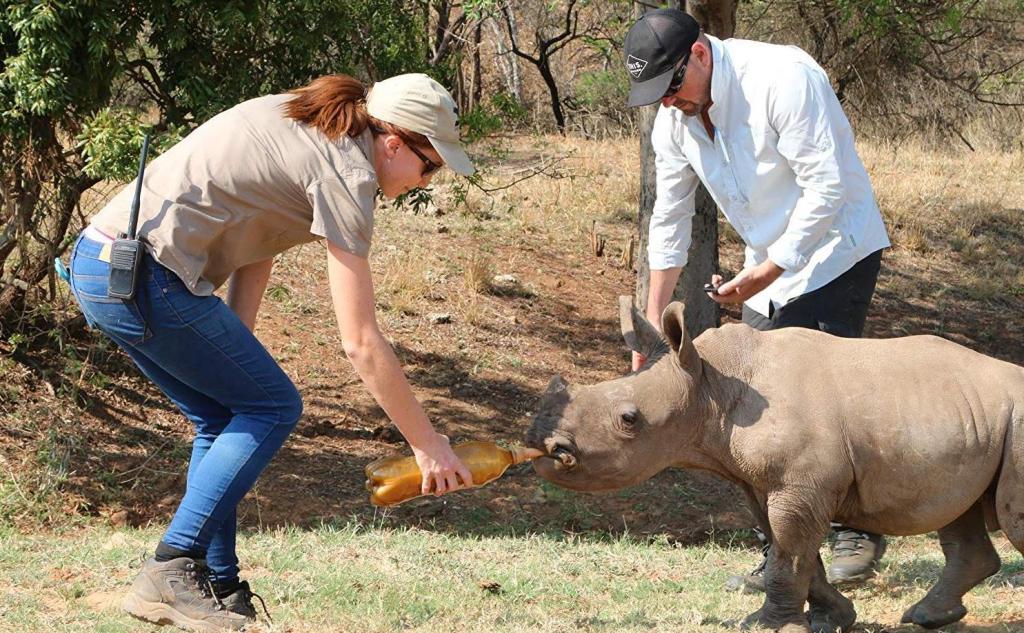 Lose a horn, gain a life – a still features the indomitable Arthur the traumatised rhino in Save This Rhino.

Award announcements are the meat and potatoes of our sector, but they can lead to some fascinating stories.

The Lumiere Awards (not the French ones) are presented by The Advanced Imaging Society, a coalition of Hollywood studios and technical groups, to reward the use of innovative acronymic technology like VR, HDR, AI, Real Time Rendering etc.

In the list of 23 awards this year, is a line item for Save This Rhino, a two part documentary made by Australians Michael Lawrence and Nick Cook, who shot to fame with surfing culture film Bra Boys, which they produced with Sunny Abberton in 2007.

They built their company Garage Entertainment into a solid sports documentary enterprise and solid it to Surfstitch in an ambitious financial play which cost the clothing company $15m before it fell apart. Madman ultimately bought the lot while Lawrence and Cook moved on to Micanical Media and joined sports film director Taylor Steele.

The Lumiere Award was emphatically not given for innovative production technology, although this was a sophisticated shoot. Instead, it was about the technology which Cisco donated to a group of rhino protectors in Kruger National Park.

According to Michael Lawrence, the project ran for four years, using an integrated tracking process with cameras and electric fences which enabled them to reduce response time to attacks from 20 to six minutes, which ultimately stopped poaching. Not a single animal died in the last five hundred days of the program. But, said Lawrence, ‘they had no way of revealing the success of this, and whether they could scale it to Kruger or Kaziranga National Park in India.’

So, the two part film for Nat Geo about rhino poaching was a campaign film, a tool to enable the spread of a technology. But it ran deeper than that. Said Lawrence, ‘It warranted the question: “What is the role of technology in the human-animal conflict and habitat loss and the way forward in conservation? What role does technology have to save us from ourselves and save the planet?”‘

He modestly claims that his films with Cook and sports film director Taylor Steele are dedicated to starting a conversation. They have a second project in which the rhino technology goes to India, another about protecting sharks, a large studio documentary with Roadshow and a film about miscarriage.

Rather than the traditional presale finance route, they have joined a lot of other hopeful iconoclasts in the use of brands.

‘We usually start with the premise we’re gonna make an editorial show where we’ve got something to say. And then we go to both platforms or networks and brands who want to join a kind of choir to sing the song. We won’t go into a brand saying “we’ve got to say this for you”. We’ve got to say “this is the water cooler moment for us”. And we’ve been lucky enough to have visionary marketers or brand custodians saying, “We want to join you in saying that; we believe that is our remit”.’

They are looking for broad audiences and have their own children in mind. They don’t want the conversation to turn into forcing kids to eat broccoli. They are also very used to working with charismatic sports people and extreme events, often in natural locations.

So the productions are formed around popular heroes who can lead an adventure and testify to camera, often working with people who really know the area in a practical way. It is an approach which got old with Discovery a decade ago, but it does work if the presenters are sincere and energised by an issue.

While the shoots can be fast, the research and development process takes over a year. They travel the world to find authoritative but charismatic experts and get the science right, with a feeling for anti-broccoli simplicity. At the same time, they sort through the best names in the area until they find someone who lights up with passion. Matt Wright, adventure tours presenter, was on board for the rhino film, along with cricketers Kevin Pietersen and Graeme Smith. Surfer Mick Fanning faced up to the sharks along with a brace of international experts. Those tactics work very well for major cable and streaming companies. They are happy that Disney has taken over Nat Geo, because the mouse wranglers are brilliant at working with social media and public relations handles.

In the midst of two of its best years, M&C Saatchi Australia brought in Lawrence, Cook and Taylor to create a production entity called THIS, which stands for The Human Indomitable Spirit. So on this strand of their work, the trio are now a subsidiary of an advertising company with long experience in deploying cultural assets to create and stabilise brands.