Box Office: Peter Rabbit happy in the US as shark film slumps here

Playing With Sharks opens slowly, perhaps because the Australian audience doesn't realise the sheer wow factor of sharks in a cinema. Or maybe they do.
David Tiley 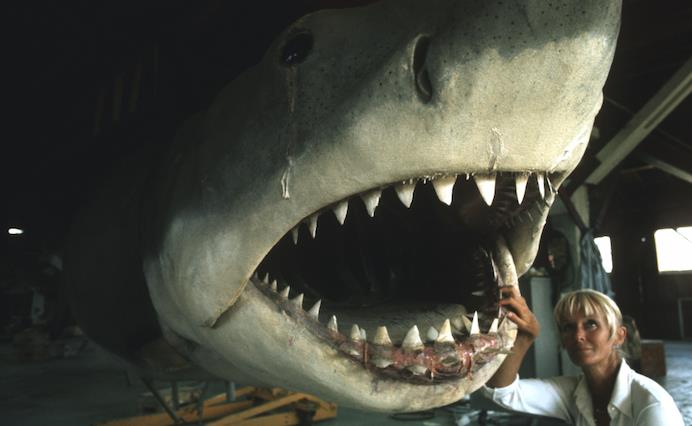 Valerie Taylor with a relic of Jaws. Image: Wildbear

Peter Rabbit 2 has been on the loose in North America for nine days. It has made $27.13 million, with $8.24 million last weekend. It bounded out on Memorial Day Weekend with $13.5 million, so it dropped substantially, but that first weekend was pumped up by the holiday. All figures are in AU$.

Last week it was neck and neck with In the Heights, which has dropped much further to $5.61 million, probably because it is being streamed.

However, Peter Rabbit 2 has now taken $26 million in the UK, and $121 million around the world. That is a pretty comfortable figure.

In Australia, the key film we have been waiting for is Playing with Sharks: the Valerie Taylor Story. Propelled by Madman, it opened on 64 screens to make $39,000 over the weekend to produce a total box office including festivals and previews of $73,000. It would probably have done better in summer but Covid has wrecked all common sense ideas. The Nat Geo version has reversed the title, curiously.

The publicity for the film was attached to the Sundance premiere in late January. The Hollywood Reporter liked it a lot, Indiewire was caught between attraction and objection, while Variety is pretty approving. So was the ABC coverage in February, while the Conversation story turned up in the NZ Herald. A spate of stories about Valerie Taylor and the ecological issues ran through May in the main papers, which is useful.

But the icing was never put on the cake by an actual review in any of the major papers.

We have republished our February piece, which combines our respect for professional practice with a sense of cinematic pleasure.

‘Even after a lifetime with archival work, Dalton is awed by the result. Meticulously cut by Adrian Rostirolla, supplemented by modern footage in Fiji, completed with simple, honest interviews with Valerie Taylor and featuring a score by Caitlin Yeo, the film is carried by sheer cinematic beauty and a story of redemption and disaster.’

Fortunately, the cinema run is a small part of the film’s exposure. The audience for this Australian film will ultimately number in the millions because it will run on National Geographic which has exclusive worldwide rights.This turns the Australian cinema release into a rare treat.

June Again, the Noni Hazelhurst vehicle, has been pottering along quietly, to make $2.45 million in 7 weeks. Now only making $26,000/weekend, it is at the end of its run.

Read: Film review – My Name is Gulpilil captures the legacy of a star

In Australia Peter Rabbit 2 is old news since it came out 13 weeks ago, and only added $121,000 last weekend, so the total box office is going to be pretty close to $21.5 million.

Here is a list of the Australian films which made more than $20 million in our market over the last ten years, adjusted for inflation. The figures come via Screen Australia. Peter Rabbit 2 will come out at number 7.

I am no statistician but I want to say there are two clusters, one around $30 million and the other between $20 million and $25 million with Peter Rabbit as a sort of outrider in the middle. We could add a lot of additional categories like major competition, number of cinemas, size of advertising, censorship category, genre and international performance.

In 2018 I did a similar analysis comparing overseas and local performance adjusted for inflation, kept in US$, which is the currrency used for international box office. The relationships are right but the raw numbers will not compare directly with the figures in the above chart.

Back to the top films for the weekend

After eager audiences waited and waited for Fast and Furious 9, it finally arrived and took over the multiplexes. The film took $8.95 million this weekend off 300 cinemas and 754 screens. That is a record since Covid, both in raw places and the two-screen assault on each location.

Read: Film review – Fast & Furious makes no sense but so what?

It has basically done three weeks of The Conjuring 3 business in a single week, so there is a huge gap between number one and number two. Indeed, the furious car film took nearly seven tickets for every one for The Conjuring last weekend.

That is something to think about as received wisdom would say that a family film would beat a horror picture, even early in the northern summer.

Peter Rabbit 2 was number three at the box office in China with $5 million for its second weekend, though that was a drop of 50% on its opening weekend. So far it has taken just under $23 million. [Some websites put the rabbit at number one, but these figures from Variety are most likely to be accurate.]

While films centred on the Chinese experience occupy most slots, Peter Rabbit beat Cruella on number five with F&F9 down at number eight. However, Cruella is running neck and neck with the rabbit in total figures though it has been out for a week longer. The F&F number puts all the current foreign films in their place – it has made $270 million in China so far. But local film Hello Mom is top of the 2021 chart for China with around $800 million.

The South China Morning Post, the formerly independent Hong Kong newspaper, argues that the influence of Hollywood films in China is waning and has the figures to prove it. This is an important warning because China has been an excellent source of audiences for Hollywood during the Triumph of the Tentpole era, and there is no reason to think that mainland industry won’t tune its films better to its audience than the generic fare from high budget US films.

Mind you, this is just one more factor in the tumult around the New Age of Streaming.