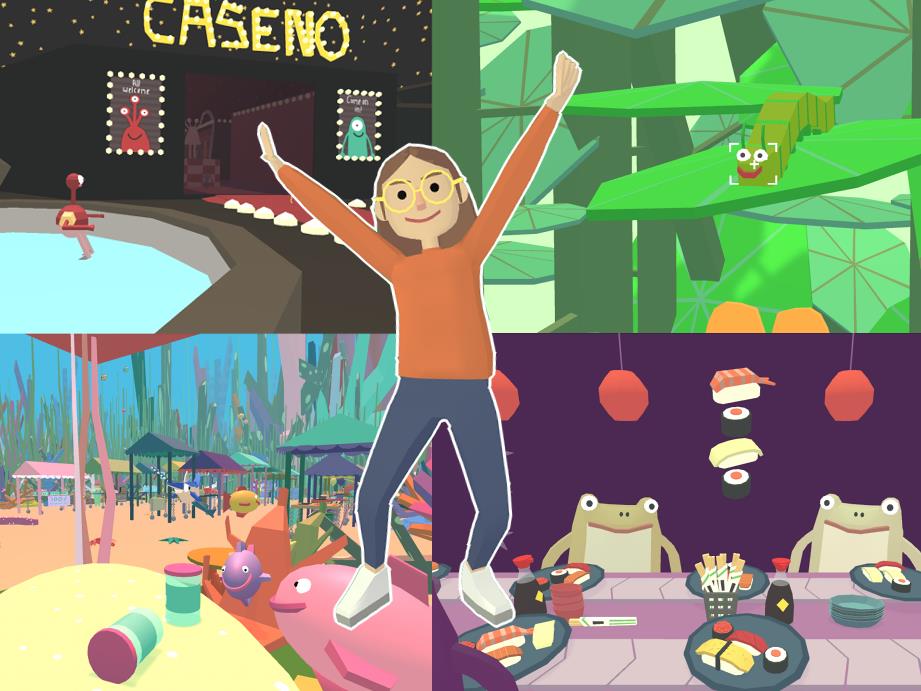 Fiona Murray and Grace Bruxner are two of the recipients of Film Victoria’s 2018 Women in Games development grants. They love their jobs, relish their role as women in the industry, are cheerfully imaginative and show the sheer variety of jobs in the sector.

Fiona Murray is a genuine innovator and problem-solving whizz, but she’s used to being dismissed as a boring accountant.

‘Every now and then a journalist will put a call out saying they want to talk to the behind-the-scenes people in the games industry – the jobs you wouldn’t think of, the unexpected stuff – so I put my hand up and say, ‘Cool, I’m the Finance Manager of an Indie games label.’ And they they say, ‘Whoa, too weird. I meant a composer or a producer or something.’

A confession here: when the publicist for Film Victoria suggested we talk to Murray as one of the recipients of the Women in Games Grants, there was a moment where I considered asking for one of the more ‘glamorous’ hands-on games developers instead.
She laughs forgivingly when I tell her this and says she’s grateful for the interest. She often feels very alone; that nobody quite understands what she does, ‘but you can’t blame them, it’s a bit obscure.’

Murray is the Finance Manager for Melbourne-based company Surprise Attack which encompasses indie games label Fellow Traveller, specialist games PR agency Double Jump Communications, and indie games investor’s fund The Treasure Hunters’ Fanclub. Now in her mid-30s, she’s been with the company since its inception in 2012, and built the majority of the company’s unique financial infrastructure and processes from the ground up.

This involves dealing with online storefronts where the developer’s games are sold, and divvying up royalties and paying them out. ‘There are so many different storefronts and each one almost has its own dialects, different billing cycles, different levels of tax depending on what country it’s in, and different levels of withholding tax,’ says Murray. Part of her job has been to build a custom importer that brings in large batches of storefront information into the Xero accounting package for small businesses.

It’s surprising to hear then, that Murray is using her $5000 Film Vic grant to go to Holmesglen Tafe (‘nice and close to home’) to do a diploma of accounting. She sounds genuinely excited about it, and at the prospect of reducing her office workload to four days a week to accommodate study.
‘I used to be a medical secretary,’ she explains. ‘I did that for quite a few years, but at some point it occurred to me that there must be a place for someone with my skillset in the games industry, because it’s full of creatives and they’re not always the best at keeping on top of their paperwork and administrative stuff.’

An avid games player herself with a special interest in ‘roleplaying games like Final Fantasy that I could lose myself in for hours,’ Murray put her hand up to help with the spreadsheeting involved in the startup of Surprise Attack. ‘I didn’t have much experience and I’d never even done a payroll,’ she admits, ‘but I figured out the basics and then the publishing label started up and things jumped up a notch. It became very fiddly and quite difficult because there was no point of reference, especially in Australia. We had to work out how to calculate royalties properly, both for Australian and international developers. It was stumping the accountants that we were working with at the time, because they’d never seen a set of needs quite like ours before. It was a long hard road. I’ve done it all backwards.’

Murray says she’s really enjoying her accounting studies and that the units covering personal tax are ‘all kinds of useful.’ She observes that the ATO (Australian Taxation Office) is woefully ill-equipped to deal with income earnt from online activities around the likes of gaming and YouTube streaming.
‘If you run your business as a sole trader and you’re a streamer you can considerably make a living wage off that,’ she says. ‘There aren’t many people in Australia that do, but it is entirely possible. I don’t think it’s something the ATO is familiar with, and it would be good for people doing it to keep it in mind and get it right from the start so they don’t get a huge bill later. The ATO is going to catch up and tell us we’ve been doing it wrong and they’ll send us a big bill.’

It’s this kind of forward thinking that’s no doubt invaluable for a games company.

Surprise Attack is based in the Melbourne games developer’s coworking space The Arcade. The company now has a payroll of 14 people, and five of them are women.

Asked what her favourite part of her job is, Murray says: ‘It sounds really boring but I fell into the accounting thing and it turns out I’ve really got a knack for it. Just balancing the books is like a giant puzzle to be solved. It can be terribly frustrating, but when you get it right it’s really satisfying! The accountant is always stereotyped as the dull one, but it’s actually one big intricate puzzle and I think that’s really cool.’

When Grace Bruxner was a kid (not that long ago actually, because she’s only 21) she liked to watch her family playing video games, but she didn’t really like to play them.
‘I was really terrible at them and that stressed me out,’ she says on the phone to Screenhub. ‘When I did play games, like Rimscape and World of Warcraft, I played them incorrectly. I would never play how the game expected me to. I would just walk around observing and not really engaging with the mechanics.’

Over the last three years, Bruxner has developed a reputation as an independent developer of small scale and experimental games, most of them 3D, available freely and usually featuring simple, cute and low-stress environments, like last year’s Alien Caseno, a game she describes like this:

‘It’s a diorama museum-like exploration game about aliens that went to earth and found a casino and they liked it so much they replicated it on their own planet from memory. It’s basically a game with no interaction other than walking around.’

A far cry from first person shooters. As far away as you can get, in fact. Here’s the trailer:

Bruxner’s work has featured in exhibitions and festivals around the world including Fantastic Arcade 2017 (Austin, USA), MAGFest 2017 (Maryland, USA), Contours 2017 (Melbourne) and St Kilda Film Festival 2018, and she was a keynote speaker at the recent 2018 Play by Play Festival in Wellington, New Zealand. (You can watch her entire talk on Youtube).

Having studied at RMIT, doing a Bachelor of Design (Games), Bruxner currently works part time at Melbourne-based indie games publisher, League of Geeks in Quality Assurance. She says this involves ‘a bunch of bug tracking, playing the game and making reports to the code team.’ She also does some customer service and community management, ‘talking to players about their problems and helping them fix them.’

League of Geeks, another company based in The Arcade in Melbourne, employs about 22 people, and according to Bruxner there are a lot of women, ‘nearly 50/50’ and many in key creative roles. She says issues around gender equality are ‘super important’ to her and that she feels lucky to have entered the industry in 2015, when things started to get better after the ugliness of 2014’s GamerGate bullying.

‘There was a huge problem in 2014 where a lot of women were driven out of the industry because of harassment and that still goes on today,’ she says, declining to talk about any personal experience of harassment she may have experienced.

‘A lot of gamers still believe games are for men, by men, and they feel threatened by women in the industry, thinking that they’re going to ruin men’s games. It’s ridiculous and offensive, but it’s changing. Stuff like this Film Vic grant is great. It’s beneficial for a lot of women I know and the problem is slowly being chipped away at.’

Bruxner plans to use her grant to travel to Fantastic Arcade in Austin in October, where her new game The Haunted Island: A Frog Detective Game has been accepted, and where she’s also been invited to speak. Afterwards, she’ll go to San Francisco to talk to some developers in a studio there and work with them for a few days.

It would be easy to characterise Bruxner’s gentle, low stress games as ‘feminine’ but she resists this. ‘I don’t think my games are particularly gendered in the way they can be enjoyed. In fact, I think most of my users are male.’

Bruxner says there’s a definite living to made in the games development industry. She’s currently working on a paid game that has generated significant interest. ‘I can see this game as being one that can support me. I’ve also recently made merchandise – pins and stickers inspired by the games, and I sell them online for extra income.’

Unlike the old days, you don’t need to be much of a computer programmer in order to design games. Bruxner says she has made her own games from scratch in the past, but these days her boyfriend does the actual programming. Her favourite part of the work is creating worlds that you can get lost in. Her least favourite part is the struggling with ‘the boring bits.’

‘I don’t like setting up the systems, the programming, and the starting from nothing,’ she says. ‘It’s a bit stressful and scary and confusing.’

All writers will recognize this. It’s the game developer’s version of the terrifying blank page.

Note: In Part 1 of our Women in Games story, we talked to Liam Routt, Film Victoria’s current Manager of Games and Digital Content, about the rationale for the agency’s program and the problems it seeks to address. Read the story here.