These lists are always subjective, so film critic Mel Campbell brought her heart to the matter of naming the ones that linger.
Mel Campbell 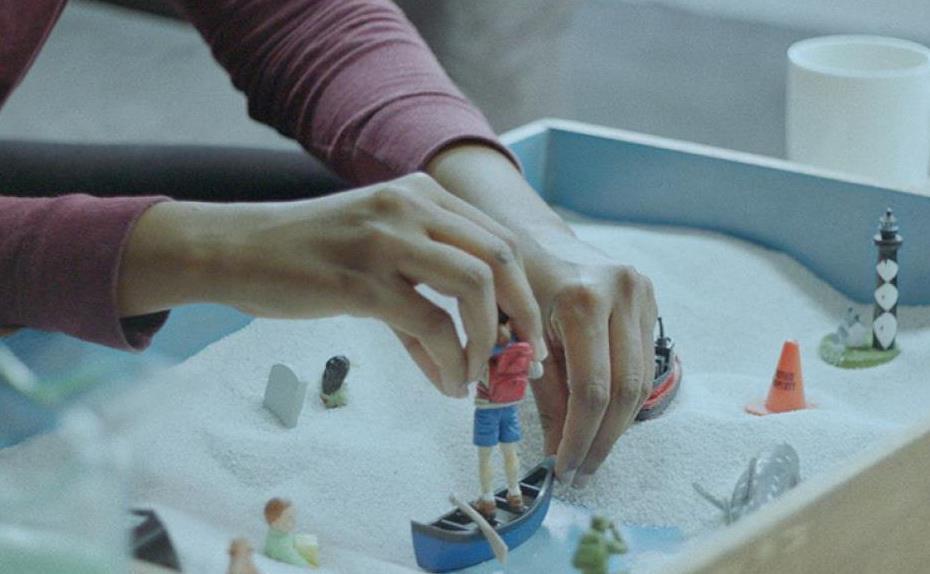 Imprisoned refugees tell their stories in a sandpit to confront their trauma, in scenes from Island of the Hungry Ghosts.

My favourite Australian films of 2019 focused on interpersonal connections, and offered fresh takes on well-worn genres. Their ideas and emotions lingered long after the final credits.

Gabrielle Brady’s documentary Island of the Hungry Ghosts was my standout Australian film. Affecting and disquieting, it’s an audiovisual braided essay about displacement and the limits of empathy, focused on the physical space of Christmas Island. Its use of sound is especially striking: the soft hiss as trauma counsellor Poh Lin Lee’s clients smooth her therapeutic sand tray; the inexorable clicking as the island’s migratory red crabs cross tarmac.

Brady finds uncanny echoes in unassuming moments. The unearthly dragon-breath of ocean forced through hollow rocks evokes the smoking roar of the burning joss paper that puts to rest the spirits of Chinese indentured labourers, and the flame that lifts a sky lantern. A desperate asylum-seeker escapes the detention centre through the jungle, screaming; Poh Lin hacks through vines with a machete to view the detention centre from above.

We already knew the deliberate cruelty Australia metes out to asylum-seekers, though here it haunts the screen in close-up, in unnamed sufferers’ faces and words. Another 2019 film, Maziar Lahooti’s clever Below, milks this nightmare for the blackest satire. Hungry Ghosts, though, makes poetry of despair, inertia, failure: “a kind of hell” where nobody moves forwards, but scuttles endlessly sideways.

In a tough exhibition environment dominated by studio franchises, Australian films are thriving on streaming video networks. Netflix had two of my favourites this year: Grant Sputore’s twist-filled sci-fi three-hander I Am Mother, and David Michôd’s louchely Shakespearean adaptation The King.

I dearly love a robot movie, and I Am Mother looks fantastic – especially the title character, a monocular metal mama performed by Luke Hawker and voiced silkily by Rose Byrne. While some critics felt it was too derivative – especially of Alex Garland’s Ex Machina – the pleasure of science fiction is largely metatextual. Anchored by a fantastically assured Clara Rugaard, I Am Mother is a speculative springboard for rich discussions about prosthetic nurturing and the moral cost of engineering the greater good.

Michôd’s film is also beautifully designed – it’s been a great year for hipster medievalism – but attracted most notice for its casting, from Old King Mendo to Robert Pattinson’s outré fop Dauphin. I feel like the only person alive who finds Timothée Chalamet offputting; but his jejune pouting here suits the role of a princeling who only belatedly realises how easily he’s manipulated. I liked the way Joel Edgerton plays Falstaff’s drunken buffoonery as an old warrior’s self-medication, not a fool’s personality. But most of all I liked the fight scenes, which unromantically depict the grim, ugly slog of medieval combat.

Speaking of combat, I’m constantly exasperated by Hollywood’s ongoing obsession with World War II, ‘the last good war’ with clear-cut baddies. When it comes to depicting today’s more decentralised violence among non-state actors, filmmaking tends to adopt either the kinetic ‘shaky-cam’ realism of Paul Greengrass, or ‘ripped-from-Fox-News-headlines’ heroism, as in Peter Berg’s work with his muse, Mark Wahlberg.

Danger Close fails to humanise its Viet Cong soldiers, who are simply waves of bodies to be mown down. But Anthony Maras’ tautly paced Hotel Mumbai grants an equally intense subjectivity to its young terrorists as to their victims. Their callous fanaticism is only underscored when Maras reveals them as naïve doofuses who pause in their killing spree to taste room-service pizza, marvel at self-flushing toilets and make tearful phone calls to their parents.

Hotel Mumbai has some of 2019’s most brutal, unsentimental screen violence. Brutality also made The Nightingale notorious. But Jennifer Kent’s examination of colonial trauma has a literary and cinematic lineage – it’s part The Roving Party, part Van Diemen’s Land. And its tenderness is as striking: the way it infuses song with a longing for country that goes beyond language; or the way Billy (the wonderful Baykali Ganambarr) fetches a remedy for Clare’s (Aisling Franciosi) milk-swollen breasts.

Kent’s most ambitious argument is also her most troubling: that white English colonisation exerts its power on all its victims equally: women, the poor, Irish and First Nations. This equivalency doesn’t quite stack up, and The Nightingale reminded me of Island of the Hungry Ghosts in its challenging reminder that even sympathetic characters are enmeshed in systems of atrocity.

Judy and Punch takes place in a more fantastical world – a grotesque, fairytale sort-of-England – but director Mirrah Foulkes emphatically skewers vain, mediocre men and the violence they depend upon to secure women’s fear in lieu of respect. Yet it manages to be funny, even in a moment of infanticide that plays like a fairground-mirror version of The Nightingale.

And while Judy (Mia Wasikowska) and her band of outsider women enjoy a satisfying revenge, the film ends on a dark note as we realise Punch (a game performance from Damon Herriman) has still won the culture war: it’s his nasty pantomime that will become a beloved entertainment for generations of children.

Little Monsters is actually less dark than director Abe Forsythe’s previous film Down Under: he saves his mordancy for Hollywood clichés. On the surface this is a zesty, enjoyable zombie comedy; but it also lampoons the tedious cinematic figure of the manchild. Here, a zombie crisis stands in for a crisis of masculinity: the manchild dwells in a perpetual, ‘undead’ adolescence, shambling through adult life. Only by learning to care for others does the petulant Dave (Alexander England) find his true humanity.

But the film still probably wouldn’t have succeeded without the luminous Lupita Nyong’o as resourceful, ukulele-strumming kindergarten teacher Miss Caroline. And even my wizened heart was partially rehydrated by the genuine wit and pathos Forsythe coaxes from an anarchic gaggle of five-year-olds. This is a wholesome, earnest film whose energy comes from the interplay between childhood innocence and adult responsibility, and a consequent rejection of adolescent cynicism.

Sophie Hyde’s Animals is most remarkable for the freshness it brings to what’s a pretty bog-standard coming-of-age story. It’s a film about how to keep hold of the people who are dearest to you, even when the desires you don’t even like to admit to are dragging you apart. “What do animals want?” asks one character… and everyone has a different answer.

Many viewers will recognise the intense, fraught friendships of their twenties in Laura (Holliday Grainger) and Tyler (Alia Shawkat), whose picaresque Dublin adventures are sensual and beautifully textured. Hyde watches them with tenderness but resists melodrama. She makes booze and drugs look both blissful and miserable, steering us gently towards the revelation that something more atavistic binds these two women.

Top End Wedding came out in May, but I still remember it fondly ­– especially as I’m currently watching Gwilym Lee’s kindly doofus face in Jamestown. The joy it finds in togetherness flushes through your bloodstream. When I saw it, I walked back to my car behind two young women who immediately looked up ‘Don’t You Worry’ by Electric Fields on their phones and were dancing and singing down the street.

We live in feelbad times, and Top End Wedding isn’t here to be edgy or outrageous. Instead it tells a radical fairytale: an Australia where Indigenous families are united, not separated; where cultures come together without shame or mockery; and where we’ll all face the future together, with hope.