Meet the Penguins: 6 things I learnt from the ABC’s new documentary

From battling seals and water rats to surviving the 1980s, the Australian little penguin is full of surprises.
Silvi Vann-Wall 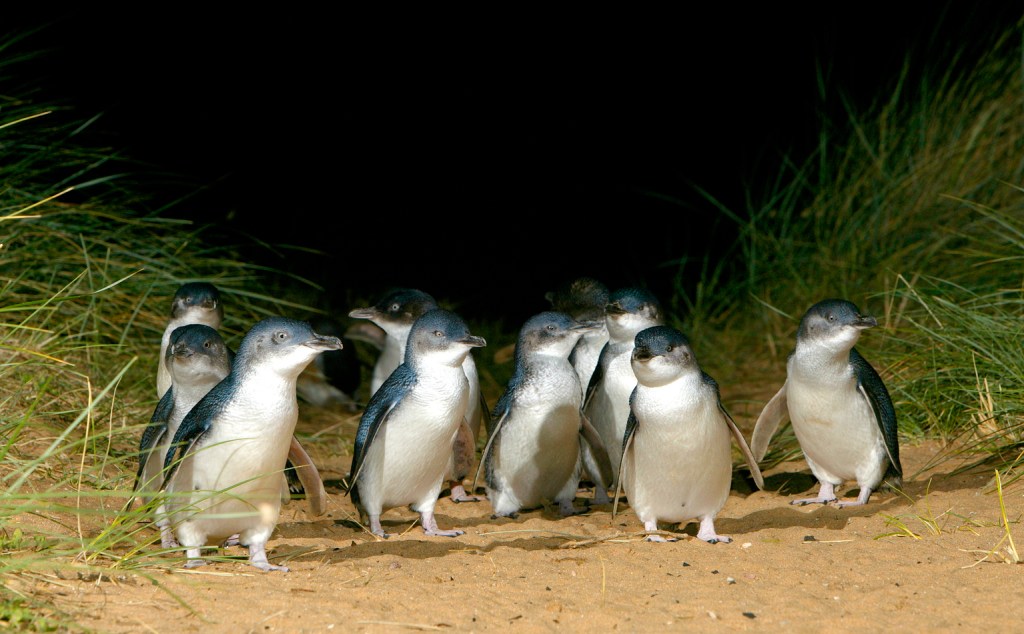 The ABC is premiering a brand-new nature documentary about Australia’s little penguins. These fascinating creatures have captured our curiosity for decades, and now, thanks to new technology and some hands-on insight, we get to go up-close and personal in Meet the Penguins.

From the world’s most famous penguin parade on Phillip Island to the penguins living at the foot of Luna Park in St Kilda, Meet the Penguins follows a handful of adult penguins who, over six months, attempt to complete a very important mission: to stake their territory, partner up and raise their chicks.

Inside the colony are both tales of domestic bliss and neighbourhood drama – while out at sea, the little penguins are forced to face trials of tempestuous weather, strong currents and migrating fish stocks.

The show is hosted by Dr Ann Jones, a self-described nature nerd with a history PhD. You may recognise her voice from from Radio National’s show What the Duck?!

Here are six things I learnt from watching Meet the Penguins.

1. You need a special camera to view penguins at night

If you’ve ever been to the Phillip Island penguin parade, you’ll know that little penguins are nocturnal. This means that catching a glimpse of them can be quite difficult if you don’t have the right guide and equipment.

For this show, the ABC documentary crew used a video camera with night-filming capabilities, meaning we get fully visible shots of the penguins under just a sliver of moonlight. Dr Jones displays just how useful this is by comparing it to her night-vision scope, which barely picks up the blurry shadows of the penguins on the shore.

Pingu lied to us. ‘Noot’ they do not. Instead of the adorable trumpeting we see in the cartoons, the cry of the penguin is actually referred to as a bark or even a growl – and it sounds a lot like a seagull or a disgruntled goose.

As each burrowing penguin is scanned for their microchip and weighed, they let off a chorus of barks (that still feels weird to type) that suggests they’re not all that happy about being filmed in their homes.

She know they’re really called little penguins, but calling them business ducks (as in, ducks that look like they’re wearing little suits) is just too cute to resist.

There’s a fairly popular meme circulating the net which says that the Chinese word for penguin actually translates directly to ‘business goose’. This, unfortunately, is a myth, with the real meaning being something more like ‘tip-toe goose’ (still pretty cute).

The life of a penguin isn’t all waddles and fish – they are apex predators after all (isn’t that wild?), and if two penguins get into a disagreement about a mate, a nest, or whose turn it is to take the bins out, they will initiate a duel. This begins with both penguins raising their flippers menacingly up into the air and encircling each other like they’re auditioning for Strictly Ballroom. And in the words of Jones, their beaks are so sharp and ‘sword-like’ that they will often draw blood. Don’t PO these penguins!

5. Seals aren’t their only enemy

Apart from the fur seals that share the ocean blue, the native water-rat or Rakali loves to feast on a penguin every now and then. The rakali and little penguin are roughly the same size, so if push comes to shove they will prey on them. I was truly shocked when two nature conservationists showed Dr Ann Jones a video of a rakali invading a penguin burrow and stealing a chick from right under its mum. I’ll never look at Water Rats the same way again.

Read: Hispanic migrants in Victoria – a chat with Our Voices director Diana Páez

6. They were almost wiped out in Victoria

The little penguin was once under severe threat – prior to the 1980s, a huge portion of its habitat was taken over by holiday homes and general human construction. Due to a focused conservation program, the majority of these holiday homes were eventually removed and the habitat had its native flora and fauna re-introduced. The little penguin’s conservation status in Victoria thus remains secure to this day.

We get a special tour of the penguin habitat in Meet the Penguins, and even get footage from directly inside the burrows – where penguin parents are busy incubating their young, and sometimes even someone else’s young!

You can watch Meet the Penguins from Tuesday 28 June, 8.30pm on ABC TV & ABC iview